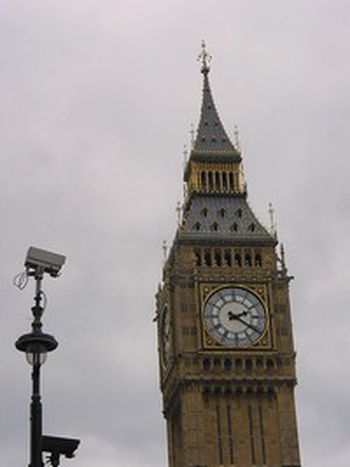 Right now, while you read this. In western Europe 6.5 million surveillance cameras rob us of our freedom, with 4.2 million CCTV cameras in the UK alone

From a loudspeaker, the words ring out: Please pick up your litter and place it in a rubbish bin. This is no scene from George Orwell’s 1984; this is reality, and has been for some time now, in the port town of Middlesbrough in north-east England. Video monitors there now observe each person’s every move. Since the passer-by does not react, the local Evening Gazette will print his picture along with a request for his identification.

In the UK, the police, authorities, local council, private companies and public services use around 4.2 million CCTV cameras to film their fellow citizens. In comparison, the remaining west European states number a total of 6.5 million surveillance cameras. The British, then, are the world champions in this respect: Londoners are caught on film, on average, 300 times per day.

Other capital cities have also been creative. In Paris, the surveillance drone ‘ELSA’ (Engin Léger de Surveillance Aérienne) was recently unveiled, a kind of mini surveillance aircraft with an inbuilt camera that is supposed to ensure improved security in the simmering suburbs. The French Interior Minister Michèle Alliot-Marie described Elsa’s '(new) eyes' – in a literary reference to Aragon's poem of the same name – as 'technological fantasy.'

The transport services in Berlin, for their part, aim to sufficiently irritate ‘undesirables’ - such as the homeless or drug dealers - with classical music, so that they leave the stations of their own accord. This, in turn, is supposed to contribute to an increased feeling of safety among passengers. Cameras have already been installed in numerous locations: in railway stations, on the underground, on trams and on buses, but also in front of post offices, private businesses and in public places.

Many measures are introduced partly in secret, or so gradually that many people do not grasp the extent of their consequences. More and more citizens conform to these new norms, rather than stand out.

According to an EU guideline of 15 March 2006, communication data in the member states must be saved for two years. This is highly controversial. In Germany, retaining communication data (Vorratsdatenspeicherung, or VDS) is to enter into force from 2008. Advocates of data protection are highly critical of the arguments in favour of VDS; 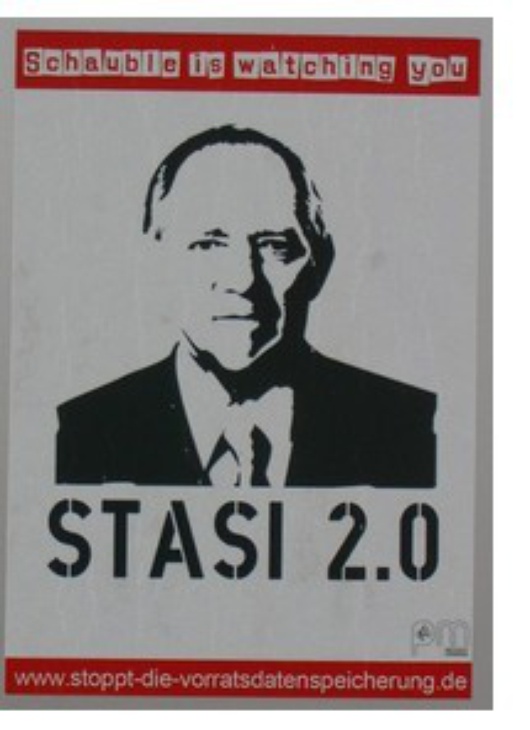 on 22 September and 6 November 2007, nationwide demonstrations took place. Yet the Bundestag still approved the law on 9 November – the anniversary of the fall of the Berlin Wall. Eighteen years ago, people were rejoicing because the police state had finally been abolished. Now comes Stasi 2.0. If German president Horst Köhler does not declare his opposition to this proposed legislation, several complaints of unconstitutionality will be lodged.

Yet the authorities have long since known precisely who is telephoning who, when and for how long. The espionage network Echelon, managed by the American intelligence service the National Security Agency (NSA), has been monitoring calls via keywords for decades now. Online searches – though still judicially controversial and not yet legally enshrined – have also been carried out in Germany since 2005 through the so-called Federal 'Trojan' (Bundestrojaner) programme.

Internet: a back door

The search engine Google also saves searches and builds up profiles, data which the authorities could potentially access. The meta search engine Ixquick from the Netherlands, on the other hand, advertises the fact that it does not record or save private user data. On Gmail, all e-mails are automatically searched for marketing purposes. What is more, the firm also restricts freedom of information and of the press through filtering search results, as is the case in China.

If basic rights continue to be restricted, it will be increasingly difficult for journalists to protect their sources. As a result, even European countries are slipping down the rankings of freedom of the press, published for the sixth time by the NGO Reporters without Borders on 16 October 2007.

And yet many people quite happily relinquish quite personal information to social networking sites such as MySpace or Facebook. Employers use these sites to check up on job applicants; it is also common knowledge that the job applications platform Monster has been hacked into and its CVs copied. With our customer loyalty cards and credit cards we are all making ourselves even more of a target, since these allow profiles to be refined.

Lock the stable door before the horse can bolt

What is certain is that every surveillance method that is technically and financially viable is being used. Whoever is actually using these data and to what purpose, or to what intended purpose in the future, however, remains a mystery to the individual citizen. As such it is particularly risky to link several data together, since this allows extensive profiles to be constructed which can be accessed by the authorities.

The concept of a man´s total transparency is vividly depicted in Tony Scott’s political thriller Enemy of the State. It becomes clear just how precious and important anonymity is for a free, democratic society. Indeed, as the father of the American constitution Benjamin Franklin said: 'Those who desire to give up freedom in order to gain security will not have, nor do they deserve, either one.'