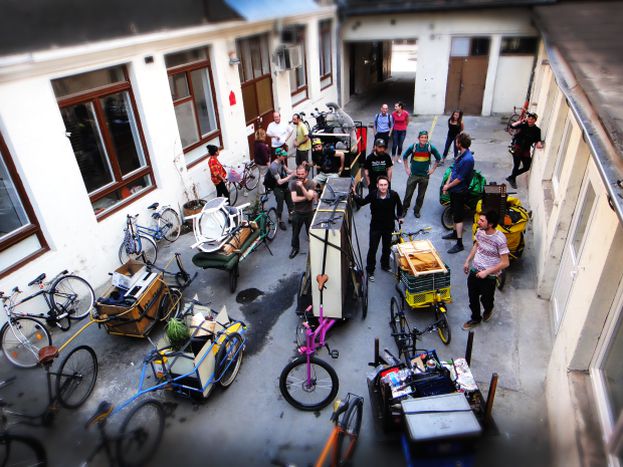 Dembinszky street in Budapest has been a curiosity for several months : the bottom of a small courtyard is forging a new path towards a different vision of society. This is Cargonomia, the result of a search for other, better, ways to live together. An interview with Vincent Liegey, a co-founder of the project.

The Cargonomia building is full of three-wheeled bicycle cargo trailers, built right there, with steel from a factory in the city of Csepel, south of Budapest. They were specifically created for the needs of  Cargonomia, with a very particular goal in mind: promoting the common development of various small entities that now work together as non-profits. Cargonomia is also a centre for the exhibition, testing, renting, and buying of low tech solutions for merchandise transport.

Really, Cargonomia doesn't produce anything itself, but it's a centre that reunites various activities by making them co-dependent. An organic farm in the village of Zsámbok produces fruits and vegetables that are sent to Budapest, and the social cooperative Cyclonomia builds the cargo bikes that are later used by Kantaa, an association of couriers, to deliver those fruits and vegetables to those who ordered them through AMAP (the Association to Maintain Rural Agriculture). 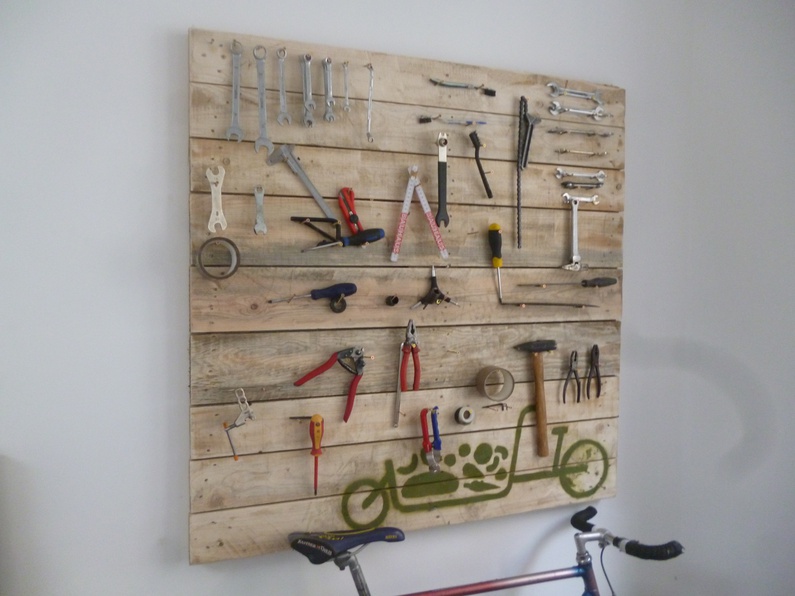 The idea for the project had been budding among its founders for over 3 years when, during one of their meetings and discussions, they decided to pool their material and intellectual resources. The Cargonomia team is rather motley: all are trained engineers, some with other sources of income, like Logan, an American who works three days a week at the Central European University as a leader of environmental issues. Adrien, a Franco-Hungarian, builds bikes and works at Cyclonomia on all kinds of low tech projects, like recently a pedal-powered jucing machine. Levente is Hungarian, and is the head of Kantaa, an expert in logistics and a trained IT engineer. Vincent is both the co-founder of Cyclonomia and the official "theoretician" of the Cargonomia project thanks to his knowledge of the mechanics of degrowth. The author of an essay on base revenue, he is the one who put all these people into contact and pushed for the creation of the project.

"We want to show that it's possible to create jobs that respond to vital necessities without making large investments or creating negative situations for the population. We need to establish a trust-based relationship between consumers and producers, we want to make people think about the purpose of our production and our consumption," he explains, hoping to incite urbanites into asking the right questions. Questions like, "In what conditions are the things we consume produced, who produces it all, and are the products healthy?"

Cargonomia also allows for a redistribution between urban centres, where the money is concentrated, and directs buyers towards a countryside that's becoming more impoverished every day in Hungary. But it's a two-way street: the Zsámbok farm profits from the cultural opening given by the city, and becomes an open farm, its goal also being to receive groups and show them their daily routines and the advantages of their methods. 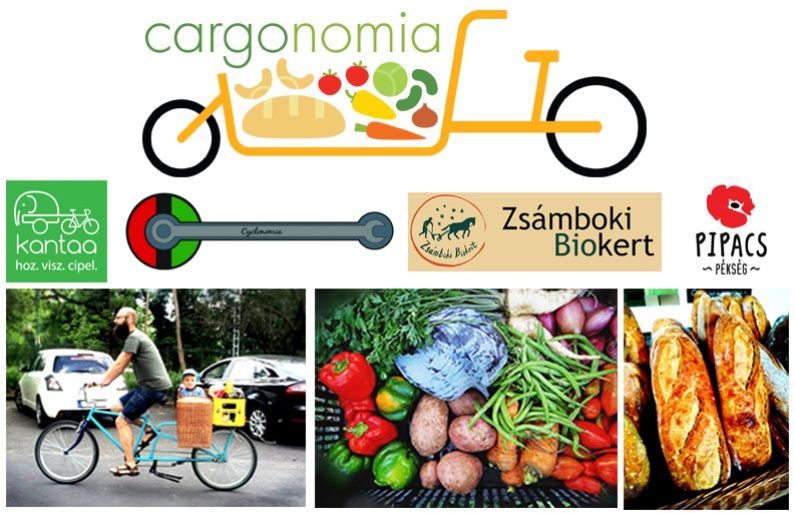 Another of Cargonomia's goals is to show that there are other ways to understand the city and urban transport, that there are other alternatives to cars and lorries to carry passengers and merchandise, respectively. It's been proven many times that bicycles make a city much more habitable, and reduce noise, aggression, pollution...

"We have already had experiences like moves, people that come and rent a bicyle for a weekend, and we can carry furniture on it without any problem. With a three-wheeled bicycle, you can easily carry 200 kilos!"

The idea is all very well on paper, but making it a reality proves to be a huge challenge. Having managed to reunite people coming from different fields, origins, and visions of the world is a strength, but also a source of conflict and misunderstandings. But like in nature, where biodiversity benefits from disturbances, the conflicts also lead to more emulation, complementarity, and resiliency within the team.

Description of the Cargonomia project, camera on board.

For Vincent, it's the debates that are inevitably what spice up the project. "It's a human and political experiment on how to experience society in another way, so there's inevitably some indecision. The more we advance, the more we discover. During the creation of Cyclonomia in 2013, for example, we needed to invent new ways of subsistence for employees, to avoid depending on volunteers being there 8 hours a day. That system can't function in Hungary, where social provision and the various nets of security that exist in France, for example, don't exist. This spawns many questions, of course, but we need to work within the economic constraints of the society we live in."

In the case of Zsámbok, 6 families depend on the functioning of the farm and, for the most part, originate from the village. Thanks to this initiative, they are much better paid than the average Hungarian farmer. The production of sustainable food generates jobs that allow for economic independence. The project then gains a social and environmental dimensions through attempts to find alternative economic models. For Vincent and his team, it's out of the question to go borrow money at a bank, so they needed to turn towards  crowdfunding.

Initiatives like Cargonomia have been multiplying in Western European countries for a few years, and they are beginning to reach Central and Eastern Europe. According to Vincent, these countries have exceptional assets due largely to their past and their culture:

"In the ex-socialist countries, there are many interesting things from the point of view of transition towards de-growth, especially as it relates to the grey market and ways of survival, but these initiatives are usually experienced by the people who put them into place as something shameful, like methods that should belong to the past. From the Western European viewpoint, it's incredible because we arrive with our own experiences of bureaucracy, of insitutions, of technology... We've had the time to realize the detrimental effects of a consumeristic society and see that it's reaching the end of its road."

How do we counteract that famous desire for growth, and value that resourcefulness as a skill that can be put to use to help society? How do we speak of degrowth in these countries that have barely experienced growth? Here is what is at the heart of most of the debates that have arisen throughout the project, and that continue to feed it day after day. Transposing these ideas to a European context allows us to learn about ourselves and others, because political, geographical, and cultural points of reference all become one, permitting everyone to open their minds and decolonise their imaginations. All while hoping to go further and build a Europe that would take to heart the material conditions of the existence of its people.