For one thing anyone who has observed the outcome of the greek election can be sure: the absolut winner of the night was G. Papandreou. The Conservative party, faced the worst night since its foundation on 1974. It's decision for early election was , a decision which .

a true event of political suicidestill is not easily comprehendable

From the qualitative characteristics of the results it is more than clear that many citizens voted for the Socialists either because they believed in Papandreou or because via that way they wanted to punish Karamanlis.

It is sure that at this very moment, the hopes of many people rallied in the face of George Papandreou.

Within the Socialist party, they seem to be realists.They say that they know the problems they are about to face: . Problems that they faced before as goverment and part of which they inherited to the Conservatives on 2004.

Many, in the Socialists, claim to be ready to '' lift the sleeves''and work, following the demand of their president.

The announcement of the new government will prove whether or not are we about to move towards a climate of trust which is essential at the moment.

He knows that next to him, next to the new prime-minister, both the media and the politicians that they were always supporting him.. He was alone when he became president of the Socialist Party on 2004 .

The winner of the elections, knows that he stands alone. will pretend Papandreou yesterday won a personal bidwhere nobody believed himAlone he led the party to the electoral victory yesterday.

Those who ''inhabit by Jerusalem'' know that tAnyone who will find himself close to a ministerial chair will have to provoke samples of to the new prime minister. Many analysts point out that by Monday we will see within the new government to initiate things in the cabinet as opposed to ''Super-ministers'' of the Karamanlis government. 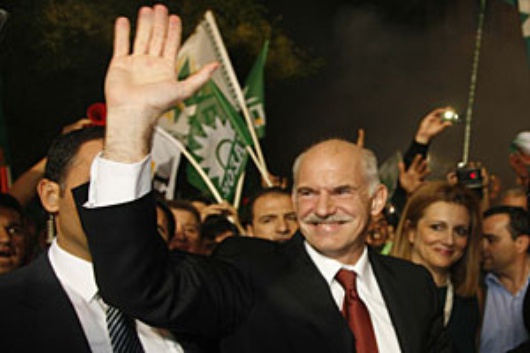 he new goverment will be structured upon its prime-minister. absolute loyaltya powerful Prime Minister's Office

I freely admit that I regret the fact that ''in a european country'' as Greece claims that is, we have  prime minister-centered  systems and we are placing our hopes in them- which is the worst.I can not even deny the fact that, personally, I have suspicions over the democratic initiatives and manners of Papandreou, especially to what concerns things within his own party.

However, I must admit that at this critical moment, only a super-concentration of control to the Prime Minister, may allow him to enforce policy.

Attitudes that remember us the pre-2004 Socialist Party. If he manage to beat these attitudes then he can battle the very-known problems of the country.

First of all Papandreou has to battle his party and the attitudes within it.

If the politician who begun his carreer by representing the will be able to these conditions. His personal bid is whether or not he is capable of making  the 2009 elections a new 1981 elections,