Today, anarchy has nothing to offer the public; a five-year-old sat in McDonalds could think of a better way to govern the people. Those that push it – the protesters on Europe's streets, as most popularly depicted in the media - are merely self-serving fools who ignore what democracy has done for us, and who are driven by some sort of warped fantasy of idyllic life

During the summer’s European elections Austria, Britain and Germany among others experienced a swing away from the centre, generally to the right, as citizens voted in anger against the ruling powers. Traditional nationalistic distastes like immigrants, Muslims and unemployment were campaign points, but the corporate elite came to the fore. Millions are incensed by the 2008 bank bailouts and talk of recent record profits. But smashing windows won't solve a thing. The banks have proved themselves untouchable, almost like they exist in a world parallel to you and me. 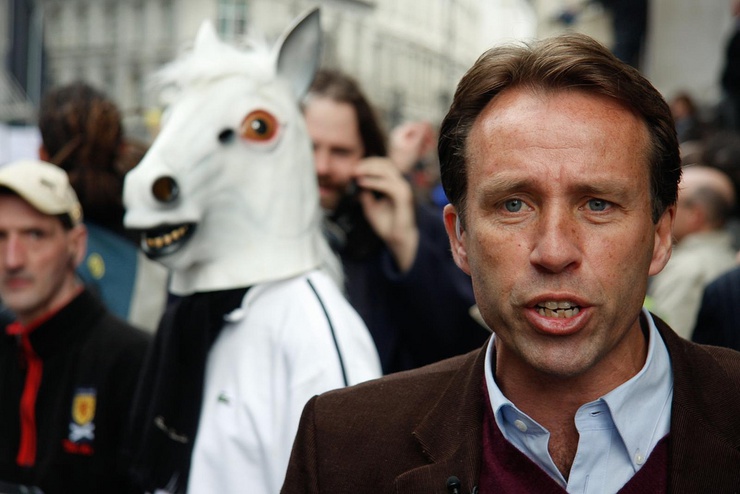 One month after the collapse of Lehman Brothers, British banks were given a £37bn handout. When the Bank of England lowered the interest rates, the banks decided not to lower their mortgage rates; something which would have passed savings on to the public. Instead they claimed their rates were set by Libor, the rate at which banks lend to themselves. Since this was a higher rate, their profits were maintained. Barely a year after the massive bailouts, the public has new reasons for outcry. Goldman Sachs has just released its second-best set of quarterly earnings ever, despite needing government assistance to survive in late 2008. The bonuses row will only intensify. It has been suggested that through the first nine months of 2009, the firm squirreled away $16.7 billion, enough to pay the average employee $526, 814.

If you gave the average anarchist a yacht in the Caribbean and a few luxury villas, he'd soon stop complaining

You don't need to be an anarchist to become infuriated by this. But to think that your life has been tangibly affected by this is infantile. In the same way that footballers are paid upwards of 100 thousand euros a week, this doesn't affect your lives. Try linking the collapse of Lehman with anything you have done in the past year. If you gave the average anarchist a yacht in the Caribbean and a few luxury villas, he'd soon stop complaining, much in the same vein as those Americans opposed to healthcare reform would if you took away their wealth. Canadian artist Paul Grignon's 47-minute documentary Money as Debt (2006) explains how banks create money out of thin air, on the promise of repayments of loans. With never ending lines of credit, the public has become accustomed to servicing their debt, held in place by the fear that if they stop their lives will disintegrate. Credit cards, loans and mortgage repayments are the reasons why people stay in the same job for years despite hating it, hesitate to start afresh in case they fail and have nothing left.

People look no further than the establishment to pin the blame on. But were anarchists to successfully overthrow any government, what exactly would they do afterward? Do you really think all those millions will stay working in those factories, manufacturing plants, oil rigs, power stations, sanitation departments if they didn't have to? If the anarchists were to 'abolish money,' as one lump brained placard carrying moron stated in this year's G20 protests in London, that nation would descend into turmoil overnight. How is anyone going to do something as simple as eating under this amazing state free solution? Are farmers, out of the kindness of their collectively conscious souls, going to continue to toil the soil so that people like me can eat? Nothing would work, and if there is no state, money is going to quickly become worthless. And then what? Oh, but Jamie, you're so consumer driven, you simply must have the latest technology. I'm not. I'm just thinking about what skills I can offer in post-state Europe and the answer is nothing. Barter in kind? I have a literature degree. What am I supposed to barter in? An essay on the decisions of Levin in Anna Karenina? That will get me nothing, even if it won awards (which it didn't). 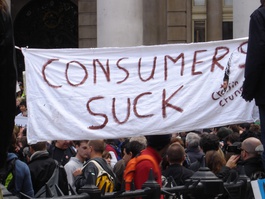 During the protests in April in London I noticed another banner: Consumers Suck. I really wanted to find that demonstrator and talk to him about just how retarded he was: 'Right then, plonker number one, let's run this one by you. You won't have woven the cotton on that banner yourself will you? You probably bought it. You also won't have found two handily shaped sticks lying on the ground from which to wrap your stupid slogan around and probably bought those sticks too. Also I note, you're in London. Chances are you are a vegan from the suburbs, so however did you get to today's march? Transport you say? Car? Wait, that definitely needs to be bought. Train? Pretty sure you need a ticket for that. Bus? Same... There's no way you walked, you're too important for the march, you just had to be there from the off. Plus, you're wearing clothes which I'm assuming are not homemade from the silk garnered from a friendly spider that lives by your window in your house which you in no way pay rent. Your banner should have read, 'I'm a [expletive] idiot who likes to make massively redundant catch-all slogans while mouthing off about the state of the nation.' 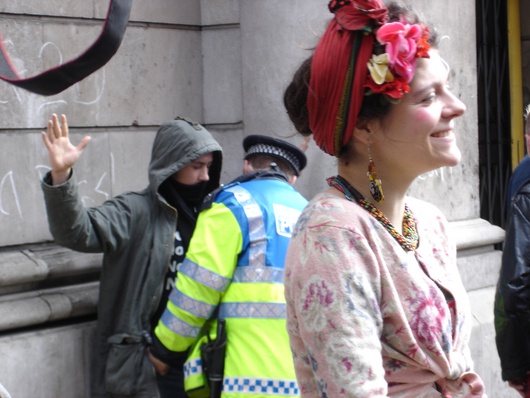 Anarchy could possibly work in a village of six families. One grows crops, one herds sheep, one builds houses, one irrigates the land, one shovels the waste away and the last family has a doctor and dentist. This is obviously not the case in our lives. But anarchists, like religious fanatics, pick and choose parts of ideologies to suit their needs. Much in the same way the Christian right has backed away from the book of Genesis, anarchists are more than willing to point the finger at governments while ignoring all the benefits democracy has brought to our lives post-1945. Capitalism has created an  inherently corrupt monster in the banking and financial systems, but to lay the blame at democracy seems absurd. No other nation has been able to thrive and develop without a democratic structure with perhaps the exception of China, but even that has vast capitalistic practices now.

Anarchists, like religious fanatics, pick and choose parts of ideologies to suit their needs

Democracies can be deceitful. Yet they are much more acceptable than being under a tyrant or the anarchist's free-for-all system, that would probably end up as some sort of zombie disaster film. Yes, the money thrown at the financial crisis could have solved many world problems and diseases. But smashing windows on 1 May is not going to get governments to stop thinking of their own interests. Find a better way to get your voice heard - I'm pretty sure that means studying hard, working for policy institutions and paying a mortgage.