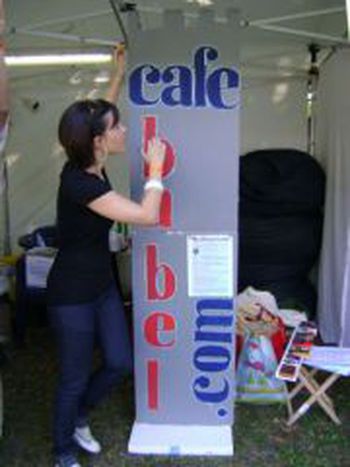 By Judit Révész Our first day on the Sziget Festival (14th August) didn’t begin very well. When we arrived, it started to rain and the island seemed to be deserted. In addition, our Brunch Talk guest, Krisztián Grecsó (writer) had to excuse himself from coming, because he got ill. Fine, good start.

However, we didn’t give up the hope that we can make something good out of that Friday, which seemed to be as unlucky as a Friday 13. And we were right, the sun shone out and the Cafebabel.com pavilion became more and more popular – especially, as we had suspected, the little yellow ‘fishing pool’. Finally we had so many visitors, that by evening we ran out of the little gifts offered to those completing our quizes and other games (squirt-guns, tent air fresheners, and others) we thought would be enough for the three days. 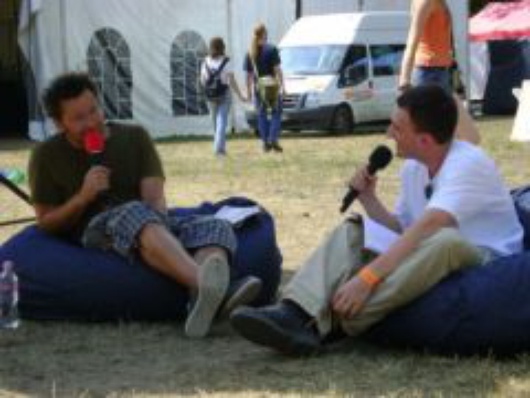 So next day’s first task was to get new presents. After that we opened again our tent that was left  last night in a mess - a concert was starting right after the end of our working hours so we cannot help escaping and running directly to the main stage. Around noon everything was already in its place: the Tower of Babel advertising cafebabel.com next to the road, the yellow kid’s pool, refilled with water and colourful swimming letters on the grass, the four beanbags in front of the pavilion and islanders, got tired in parties of the past days, on the beanbags. Many of our visitors came to us as to an old acquaintance – they regularly read Cafebabel.com, some of them had already written or translated articles for the magazine. 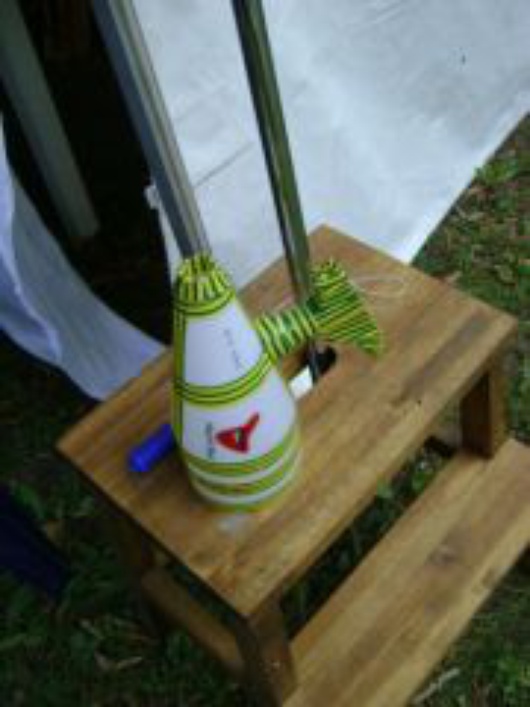 At one o’clock we met András Lovasi, icon of the Hungarian bands ‘Kispál és a Borz’ and ‘Kiscsillag’ and began the Brunch Talk. He spoke about his personal experiences on Sziget Festivals of the previous years and about changes of the Hungarian light music in the last twenty years. We also talked about the EU Parliament elections, about Hungarian political initiatives and about a new party, the LMP (Lehet Más a Politika – Politics Can Be Different) that was put him on its EP-elections list. To the question coming from the audience, whether he is planning to write a book, Lovasi simply said ‘No’. (An article based on the interview will be published in the magazine soon.)

As evening drew nearer, our pavilion attracted less and less people – well, we could be no match for the many concerts. Although, the Speaker’s Corner became increasingly popular as the passers-by’s blood alcohol level rose. An Italian young man, for example, yelled holding the megaphone: ‘Ragazzi, italiano, maffia’. This was his message to the world that day. 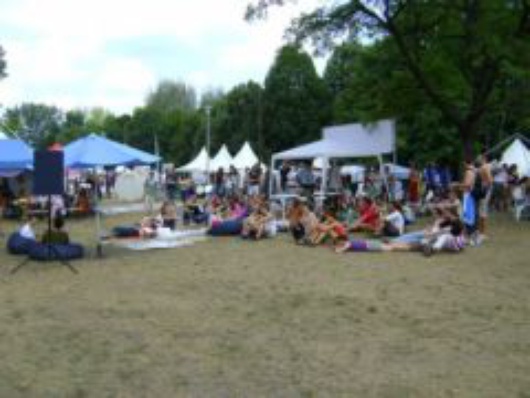 On Sunday, our third and last day on the Island, things went nearly the same way. In the early afternoon we invited visitors of the Festival, who had just finished their breakfast, to a nearly one and a half hour long Debate. Veronika Harcsa (jazz singer), Balázs Bodó (media researcher), Zsolt Jeszenszky (from ProArt) and Zoltán Ormós (lawyer) talked about (il)legal music-downloading. Although the heat and the loud noise coming from the Main Stage drove many listeners away, those who stayed could hear an interesting and informative conversation. They got to know, for example, that musicians themselves often download music from the internet. (An article based on the debate will be published in the magazine soon.)

Our third Sziget Fesztivál is over, but we hope, next year we will be there again. A multicultural festival and a multilingual magazine somehow belong together, don’t they?