On 16 May Der Freitag newspaper in Germany recognised cafebabel.com Berlin as a European prize winner in 2013. cafebabel Berlin, the blog of the official network of volunteer journalists and fixers in Berlin which was launched in 2005, join the folks at the Forum for European Journalists (FEJS) and Project .Part as the three official winners.

They were selected from 89 projects and amidst over 40, 000 online votes. 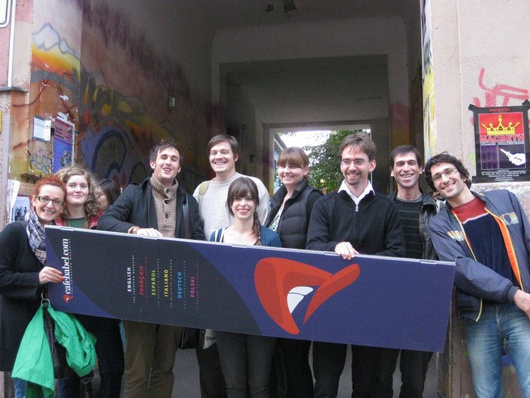 The local cafebabel.com Berlin team in 2012 during an 'Orient Express Reporter/ Europe on the ground' reporting mission with foreign journalists

'Europe is more than a Europe of banks and politicians,' says a statement from Der Freitag newspaper, 'and this competition proved it. These projects showed us that a European identity and solidarity does exist, that Europe is more than just a dictum.' 'cafebabel.com and FEJS offer long-term perspectives for the deepening of European thought through their focus and status as relevant platforms,' says Tanja Dückers, of the jury.

cafebabel Berlin wins the tune of 1, 000 euros for the competition. The multilingual, pan-European team of young journalists are part of a local, active network of bloggers, journalists and fixers who put Berlin and its stories on the map for cafebabel.com, the European magazine. They plan to use the funding to further their series of portraits of young Europeans living across the borders, in conjunction with their colleagues at cafebabel Vienna, cafebabel Belgrade, cafebabel Budapest, and cafebabel Sarajevo.

A huge thanks to all the cafebabel Berlin fans and supporters who have been giving us our daily online click of support!