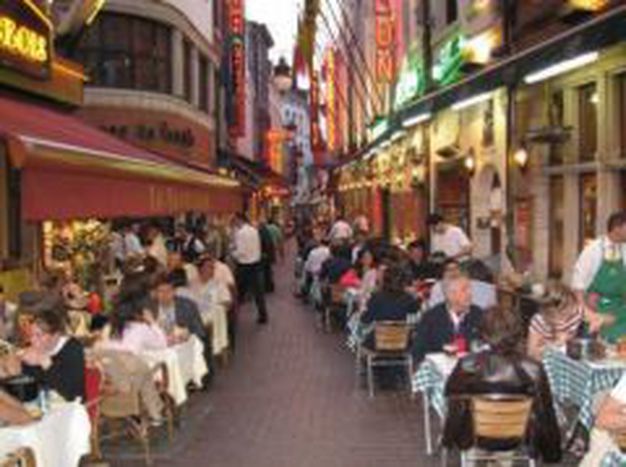 By the people, for the (young) people!

Article by Rose Kelleher In a cobbled back street just off Rue Neuve is a tourist information office with a difference. All primary colours and smiling receptionists, this is USE-IT, the Brussels branch of a citizens tourist information office for young people. This is a non-commercial, no-nonsense venture with local staff who say things like “Avoid rue des Bouchers, its a tourist trap”.

“If you go to a normal tourist office and you ask “where should I eat tonight?” you get a brochure with 250 restaurants sorted in alphabetical order, and when you ask them “Yeah but where do you like to go and eat?”, its like they short-circuit, they don't know what to answer because they are not people anymore. That's the difference with USE-IT.” says editor in chief, Nicolas Marichal.

“Tourist offices work on a different principle, they are always neutral.“

USE IT's main draw are its beautifully illustrated maps which are designed by young local artists. The staff has opinions and favourite bars and a passion for Brussels (as well as intimate knowledge of the city). The concept is a lack of promotion and vested interest. “The initiative always comes from young people who want to start something non-commercial in their city, to give real information.”

“For a lot of travelers window prostitution is totally new!”

One of the best things about USE-IT (apart from the free tea, coffee, and internet, of course) are the non-traditional tours. The free maps indicate quirky alternative tailored tours that attempt to encompass different aspects of the city. For example, one walking tour begins in the bustling, trendy rue Dansaert and place St Katherine, continues onto rue de Flandre until you come to a derelict but up and coming rue de Lacken artist hideout. The tour continues onto boulevard de Anvers, notorious for street prostitution and then crosses the street to what Nicolas calls the “Manhattan area” (rue Roi Albert II) with its tall buildings, very impersonal feeling and weird after-hours atmosphere. The tour then brings you to the North station, to the Moroccan shopping street, an unlikely tourist destination though still an integral part of the city and again, more prostitution. Nicolas laughs “For a lot of travelers window prostitution is totally new!”

Nicolas: “Brussels is always about turning a corner into a different world. St Josse is the poorest and most densely populated part of Belgium with the highest unemployment, but just around the corner you have a very exclusive residential area with lots of art nouveau buildings. Just around the corner from the poorest corner of the country! USE-IT doesn't want to promote the comic strip walk, or the art nouveau walk, we want to go the other way. We want a lot that is not the same. That is what Brussels is about.”

There is no boss in USE-IT. Nicolas (who is an illustrator and cartoonist on the side) says “I fell into this job by accident. I didn't get the job because I studied something relevant. I started 6 years ago because they needed an editor for the map of Ghent.” The Ghent office was the first office to open in Belgium, but because there was a lack of young tourists in the city, it was moved to Brussels two years ago.

“My favorite place in Brussels is the swimming pool in Place Jeu de Balle. I love the atmosphere, the architecture. I am always surprised that so few people are there. I like that you don't get a key to your locker. My favourite moment of the week is when I have to call the guy “Monsieur, numero quatre-vingt!” and he comes to open your locker. He calls me Jesus Christ!” (Nicolas has long wavy brown hair and a beard. He looks a bit like, well, Jesus Christ.)

“Last week I saw a guy cleaning the streets with detergent because he thought Brussels was ugly, he kept shouting all the time. But he was crazy.” says Nicolas. “What tourists see here is usually not what locals see”.