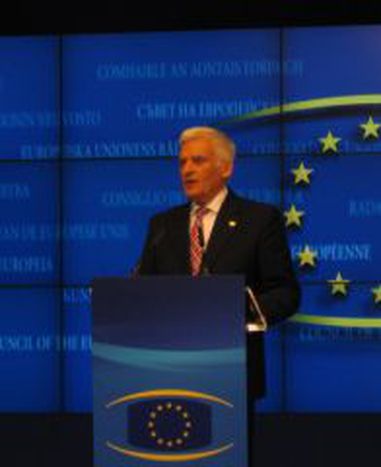 Appearing just before 9 o’clock after having addressed EU leaders, Buzek was confident that the Greek crisis would not destroy the eurozone saying “the Greek crisis can certainly be solved.” He called for courage and leadership and appealed to EU leaders to be “more flexible” towards Greece, reminding them that “we must not fail”. He said solutions made now must be “valid for decades.” He compared the need for the Greek parliament to overwhelmingly accept its government’s austerity measures to his own experiences in Poland following the fall of communism where strong support on all sides of the Polish parliament led to tough reform measures being introduced. A convincing majority in the Greek parliament would be a strong signal to financial markets and help bring stabilisation and confidence back to the euro-zone.

Besides the economic crisis, the issue of migration is set to feature heavily at the summit. Buzek addressed the growing problem of border control admitting “we could have some improvements” to the Schengen Agreement, but dismantling it entirely was out of the question as the free movement of people within Europe is of enormous importance. He reinforced the need to “foster economic development” in countries where immigrants are coming from.

Welcome to the Union

With Croatia reaching the final stages off accession to the European Union this week, Buzek noted how this was a good sign of the union’s influence in the Balkan region and looked forward to working more closely with Serbia in the future.

Finally, as the European Council looks set to appoint Mario Draghi as President of the Central Bank tomorrow, Buzek welcomed his selection as candidate and said he will provide “a good continuation of the Presidency of Jean-Claude Trichet.”