When the Presidents of the United States and Russia meet in Bratislava for a one-day summit, both will be under pressure to demonstrate their positions as statesmen of powerful countries 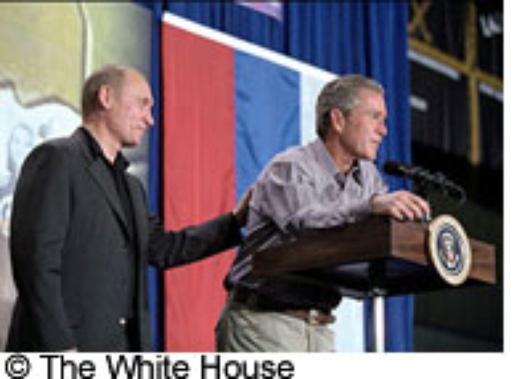 For President Bush, the summit on February 24th represents an opportunity to press forward with his newly defined foreign policy of democracy building abroad and confront Russia about its diminishing freedoms. For President Putin, who is rebounding from Russia’s unsuccessful attempt to influence the Ukrainian presidential election, the summit may be the chance to demonstrate that he won’t tolerate criticism from the US, which itself is accused of human rights abuses at the Guantanamo Bay prison facility and the military use of torture.

Once bright hopes for Russia to shake off its crumbled Soviet past have faded with Putin slipping easily back into the traditional role of Russian authoritarianism. Amongst the most notable steps away from democracy are the state clampdown on the Russian media and Putin’s political party’s dubious two-thirds majority sweep in the parliamentary elections in 2003. Then there is the rigging of the presidential elections in Chechnya that same year and, of course, the arrest of the wealthy business man Mr. Khodorkovsky and the re-nationalisation of Yukos oil company which is now firmly back under the Kremlin’s control. It is unsurprising then that for Washington, one of the most important topics on the summit agenda is the lack of "progress in the democratic transformation of Russia"; particularly since in his inaugural address last month, Bush made clear that “The survival of liberty in our land increasingly depends on the success of liberty in other lands. The best hope for peace in our world is the expansion of freedom in all the world”.

Although this is seen by many as an aggressive policy which interferes with a nation’s own natural evolution towards liberal democracy, the idea that the US may influence undemocratic nations simply by its position as the dominant world leader shouldn’t be dismissed without consideration. Putin may be determined to take Russia down its own path, but he needs to cooperate with the European Union and the US to realise his goals of Russia as a political and economic global power. Putin’s drive for Russia’s accession to the World Trade Organisation for example, means that there is room for negotiation and cooperation with the EU and the US and that they will have to work together. Still, after recent events in Ukraine where Putin accused the West of “meddling” in Russia’s neighbourhood, Putin may feel the need to clearly demonstrate that he won’t stand for any lecturing from the US about freedom and democracy or the lack thereof in Russia.

East meets West in the middle

Slovakia, the quiet host of the upcoming Presidential summit, has its own message to proclaim. It is of significance that Bratislava is the meeting place for two of the world’s major personalities, from two important countries whose relationship is of global consequence. Bush will be the first American President to visit Slovakia, a point in itself to note. Slovakia is a symbol of the culmination of ‘New Europe’ that, for better or for worse, reached out to support the US and its coalition in Iraq. At the same time, it is a country that still has economic ties to Russia and whose relationship needs to continue in a healthy and transparent manner. As one of the 10 new EU member states, Slovakia is just one of the success stories of political transformation and economic reform. Could the same be said for Russia in the future?