Nonetheless, sometimes even royalty likes to keep a low profile … Allow me to recount to you the events of the past few days, starting with a trip to the Burj, through a visit in Club 400 and ending on a random conversation with “the perfect stranger”.

The Burj is certainly a $650 million well spent. It is breathtaking – half like a yacht, half like a sci-fi dwelling - an enormous lighthouse towering above the turquoise sea. It does not glitter and reflect the sunshine like it always does in the photos for tourists – it is surrounded by a misty haze of sand that blows to the Emirates from Saudi Arabia.

It is a bit disappointing when you walk in though. You can’t help but sing to yourself “Made of plastic – It’s fantastic!” with a bit of cynicism when you consider the overly colorful interior decoration. But then you take a lift to the 15th floor and look down to the lobby you get to appreciate the affect: it’s a perfectly thought out mosaic: 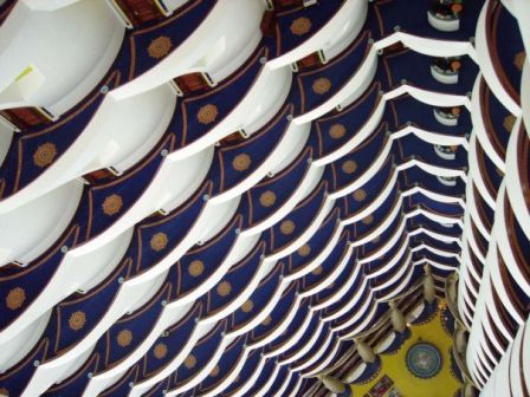 I had the great privilege to visit the Royal Suite (not usually accessible to tourists, but I do have a lot of friends of my friends, apparently). No wonder they do not – the 780m2 suite is occupied most of the time. Members of the Saudi royal family and businessmen from the region can easily afford to spend 25,000 petrodollars to indulge in luxury. The turning bed on the male side of the suite (depending whether you want to watch TV or the view through the window), the Jacuzzi-sized bathtub and the enormous mirror, conveniently located above the female bed, are some reasons to consider reservation: 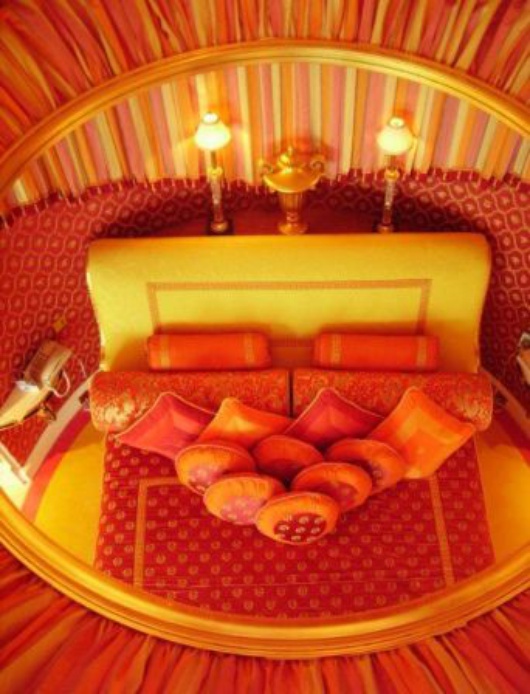 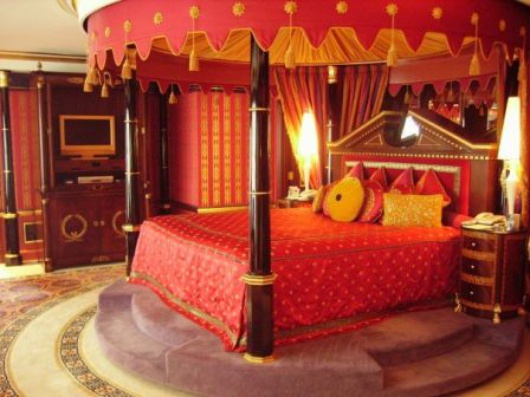 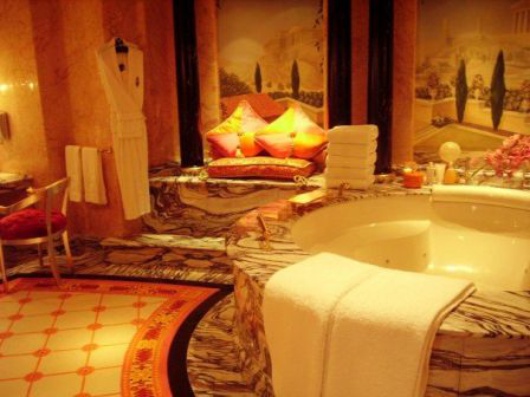 Burj-eoisie goes out to party: Club 400

Described by the Time Out magazine (the magazine that tells you the What? Where? When? in Dubai) as “a super-exclusive hang-out where the rich and the famous go to see and be seen” is indeed one of the nicest clubs I have ever been to. My local friend took me there, getting me in without even having to wait in the VIP line. There must be a super exclusive guest list – for people who are more important then the very important ones ;-)

We had a great table and champagne was flowing in fountains – literally: the boys accompanying me decided to have a champagne shower. The nicest part was that all the bottles for the VIP tables were brought in when music stops and with fanfares playing. Silly though it sounds – it makes you feel special.

The music, a fun, bouncy mix of funky house and hip hop is very similar to the music heard in European clubs. The Europeans (and for that matter: also the Americans) could adapt some of the rules of the local etiquette, however.

Rule One: ladies, no jeans. You risk looking really cheap if you do. Gucci and Armani dresses most welcome.

Rule Two: no grinding, no snoggling. The clubbing experience becomes much more enjoyable if you do not always have to “watch your back”.

Rule Three: men pay, women do not. Whoever said Dubai was expensive must have really meant: “Dubai is expensive for men”. It may have been my most generous and welcoming friends in this particular case, but in general, Dubai is very female-clubber friendly. Women never have to pay cover and in most places they can drink all they want all night long. I do not mean vodka shots – I mean quality elegant cocktails. Heaven.

Big thank you to my wonderful friend of a friend for taking me there and for driving me home with his cousin’s custom made luxury van with a Dodge Viper engine (also called: 'a van that flies'). It was lovely. I had fun. I had a taste of Arabian generosity and this experience was my official 'Welcome' to Dubai.

You can apparently meet fascinating people in the line to The Irish Village, a popular Irish pub in Dubai. Having overheard a girl speak French on the phone I picked up a random conversation with her, which soon turned really interesting. The girl used to live in Saudi Arabia, where her mother taught English to the female members of the royal family. Fascinating. But even more is the fact that as we kept on talking about the lavish lifestyle of the Dubai elites she said to me: “Over there you can see my friends. One of them is a member of one of the five most powerful families in the Emirates. He doesn’t like the luxury that is so typical to the life of his friends from here. Plus he is one of twenty children – doesn’t feel too special in any case.”

This statement really made me reconsider what I personally think about Dubai. Dubai is perceived as a soulless city. It is not soulless for me just because it is mostly plastic, glass and gold. It does have a soul, its true self, but like a beautiful actress it does not readily reveal it in public interviews…