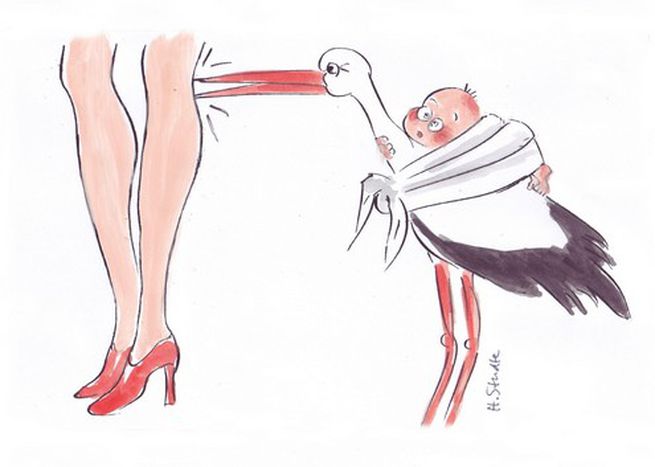 Bun in the oven

According to Eurostat, 5.4 million babies were born in 2008. Lithuanians are the most industrious breeders, while Germans are at the bottom of the chart. Some of Europe's expressions for motherhood

Mighty oak trees may be born from tiny acorns, but women only ever give birth to little angels. Tiny fingers, peachy skin, a few curls of hair on the forehead . . . when new parents hold their little bundles of joy, or little cabbages (petit bout de choux as the French say) in their arms, it becomes the most precious treasure in the world.

The Italians, true believers, pick their babies fresh from the garden, believing i bambini nascono sotto i cavoli (babies are born under the cabbages). Thank you Mother Nature! These strange horticultural ideas also made it to France, where they say little girls are born dans les roses, amongst the roses. The stork myth is also found in many European cultures, including in Germany, where the bird bites the mum-to-be to fertilise her: von Storch gebissen. But the legend of the long-legged migrant, as odd as it seems, is a serious affront to women. After all, they do all the work, once the seed has been surreptitiously planted, carrying and giving birth to the offspring. And it seems that this process is much less magic than the initial stage for which the stork gets the credit.

The Spanish, more down to earth perhaps, have understood the truth. Their phrase tener un bombo, which simply means ‘to be pregnant’, gives the image of a huge heavy drum, straight out of a brass band. It moves, it rumbles, it grows inside, like a loaf of bread or, as the English say, a bun in the oven, portraying the mother as a cosy cooker. The more carnivorous Germans prefer to see it not as a sweet snack but rather a piece of roasted meat: einen Braten in der Rïhre haben. The French have another phrase which hides the secrecy, drama and sometimes complete surprise of the event: trouver un polichinelle dans le tiroir (to find a puppet/ Punch in the drawer) is not something you do deliberately, neither is finding oneself en cloque (with a blister).

But this voyage into the varied world of motherhood must be worth the effort. As soon as the baby is born, he or she is brought into the light (dare alla luce the Italians say). Then the loudmouths of all languages have nothing more to say, and in the stunned silence of two new-born parents the quiet chirping of a bird floats in the air above the cradle.

English:'to have a bun in the oven'