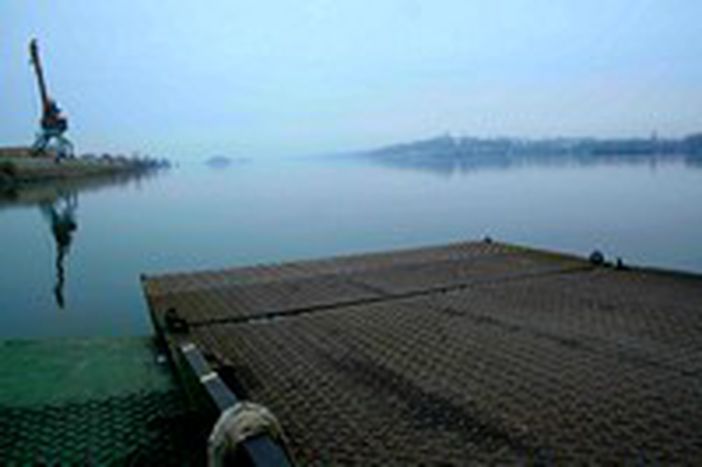 Bulgaria and Romania are Laurel and Hardy

The Danube, on the Bulgarian–Romanian border, is 793 kilometres long. Tenko Milev casts his line out and looks with discontent across the water to the other side – towards Romania. He is 59 years old and unemployed, like almost a quarter of those living in the infrastructure stricken region of Vidin. The situation on the other side in the Romanian district of Calafat is strikingly similar. Milev only knows this from listening to hearsay and gossip. ‘I’ve never been there. Perhaps it’s better, perhaps it’s worse, who knows?

As unknown as it is to Milev, the other side of the Danube is terra incognita for many people living in Vidin – and vice versa. A ferry runs now and again between the harbours, but not on a regular basis. There is just one bridge crossing the river which stretches across the 500 metres between the two countries. There should be another bridge between Vidin and Calafat, but this topic has merely remained in discussion for years.

The fact that there is only one bridge between both sides is astonishing, but according to Albena Shkodrova of the Balkan Investigative Reporting Network in Sofia, this is symptomatic of the relationship between the two countries. ‘Bulgaria and Romania are a bit like Laurel and Hardy – one big, one small, both a bit strange and both constantly standing in each other’s way.’

For a long time now Shkodrova has followed relations between the Balkan states. Bulgaria and Romania have almost nothing in common. The former Socialist brother share a fake and artificial friendship, she says. Romanian dictator Nicolae Ceauescu ruled with a critical view of Moscow, whilst Bulgaria under Todor Zhivkov was Russia’s truest ally.

No time for building relations

In reality with her roots and history, Romania has always felt a bit like an island in a Slavic sea. In the eighties both countries blamed each other for polluting the atmosphere with their chemical plants situated along the banks of the Danube. After the political transition of 1989, both countries were more concerned about coping with their own problems and had no interest to spend time building relationships with their neighbours. The common goal of EU membership also bred an atmosphere of competition – the fear of falling behind other members was too great. The opportunities for cooperation were only realised later. Since then, there has been exchange and teamwork, at a political level at least.

Despite this, the people know nothing about each other. Bulgarian businessman Emil Vutchev was excited before his first meeting with Romanians three years ago. He knew nothing more than the old stereotypes such as: Romanians are very poor so they steal; in the streets there are donkeys everywhere; they are wild drivers. ‘I was astonished when over the telephone I heard them speak excellent English’. Vutchev met very well educated, internationally aware and forward-thinking people. ‘They spoke openly of their fears and worries that Bulgarians would steal their cars and that we were all criminals.’ They had to understand that Bulgarians and Romanians have the same lifestyles and the same problems – and even share the same prejudices about each other.

The stereotypes only lasted so long because neither Bulgarians or Romanians ever travelled to each others countries. They never had the opportunity to discover that the opposite of these stereotypes is actually true. Those with money preferred to travel to Western Europe. For a long time, there was no reason to visit each other. The border charge used to be 50 Euros – far too expensive for people with so little money to even contemplate crossing the border. ‘The border regions are so poor that there is no exchange or trade. Even if they crossed the river what could they do on finding themselves in a region just as poor as Vidin,’ asks Shkodrova.

In the meantime, border charges have been abolished. A planned bridge between Vidin und Calafat is allowing hope to grow for those on both sides: hope for investment and hope for an economic upturn with a new transport system to Western Europe. EU membership – not just hope for a better life in both countries but also perhaps of the beginning of a new relationship between the two neighbours.