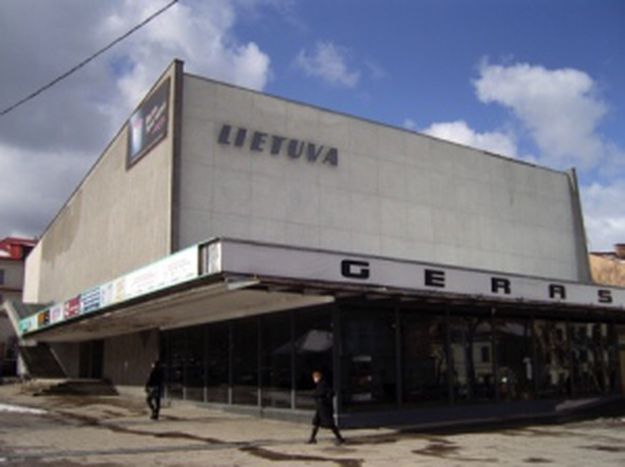 After the collapse of Soviet Union the consequences of the social and ideological contradictions can still be sensed in different areas of life. Architecture is not an exception. Is Soviet modernism a gloomy heritage or an unique trace in history? A specific social pressure at the beginning of XX century caused a discontinuity from the past.

The fast growing population in Europe together with the industrial revolution has provoked the sudden emergence of a demand for buildings for living and other purposes. The destruction caused by the two world wars determined the need of rebuilding entire neighborhoods. These changes evoked development of new techniques and new materials, rendering a possibility to build structures of big scale using cheap and mass production methods. These were the preconditions of modern architecture appearance. The form in architecture became a reasonable function. New, practical buildings were perceived as beautiful – until then in all historical styles, especially in XIX century eclectics, the form of the building and interior were not specially interconnected. Modernism, which was earmarked by aesthetics of white, smooth walls, the usage of mass production and huge volume scales, undoubtedly was advantageous for the social situation at this time.

It is a paradox, but this new movement reached the peak of popularity after it was forbidden by the totalitarian regimes reigning in Europe. Many artists of modern architecture, distinguished by their  original way of thinking and working, which had the courage to deny already established architectural traditions (W. Gropius, L.Mies van der Rohe), were born in Germany later dominated by totalitarian regime. The architects were exiled, imprisoned or forced to conform to the dictate of architectural committees. The Soviet Union was not an exception, where more than one avant-garde art movement has arisen.

How specific and distinctive is the architecture of Soviet modernism? First of all, by the contradictions of ideology and aesthetics. In 1955, when the Western Europe modernism started to be strongly criticized, the aesthetic attitudes towards the style started to change – the act “Regarding the Elimination of Surfeit in Designing and Building” had been enforced by the CC CPSU (Central Committee of the Communist Party of the Soviet Union). It was an unprecedented case – the political will determined architectural style, causing revival of modernism. Under the social program delineated by the party a new massive typical construction began to establish in Soviet Union, and the complexes of massive living and social buildings were landscaped.

However, even at this point other essential differences from Western modernism appeared.

A smooth wall did not become beautiful in Soviet Union. Very often it was decorated with ornament or mosaic, horizontal lines were attempted to be spiced with new elements of architectural expression, which could not have been applied in the work of ideologically thinking modernists’. On the other hand, thanks to the professionalism of the architects of that time and professional foreign literature secretly brought into the country, we have original nuggets, reflecting the spirit of the time; astonishingly clean architectural aesthetics, harmony of proportions, which, as monuments of the recent history, unfortunately are disappearing unvalued.

Is the seal of ideology ruining the value?

The current state of modernism architecture is also related to ideological aspects. It is especially painful in the country where architectural monuments remind of recent totalitarian past. After the re-establishment of the Independence in Lithuania, everything, which was built in Soviet times, became unacceptable and vulgar. It was started to be considered as intruded upon others, dictated, and enforced. After the socio-economic situation changed, unnecessary and neglected pearls of Soviet modernist architecture turned into ghost buildings with massive grey walls, large scale and grey concrete as their distinctive feature…

Large scale buildings built in the centre of the city, in the meantime, often become especially attractive purchase with the value of land increasing. They are not protected by heritage regulations and therefore are being destroyed easily. However, when the building is ruined, not only „ugly“ piece of the time disappear, but its social or cultural designation is also being changed – instead of the demolished building are sprouting commercial and living objects. At this situation namely the Soviet modernism fall under the biggest cultural – memorial load. And the biggest threats.

The buildings itself are not past, and the way, how we interpret them today is not history. Historical buildings and the way they look today is a reflection of our present. Only our behavior models towards the Soviet architecture will determine if these buildings will become part of our architecture and culture, or just meaningless, speechless and collapsing past.

There are some examples of modern architecture in Vilnius

CINEMA THEATER "VILNIUS" (J.Kasperavičius, Č.Strimaitis, 1963). A good example of modern reconstructionizm, also called „fasadizm“ where the facade of the building is left in tact but the interior is completely changed. Currently the building is occupied by  „United colors of Benetton.“ The previously valuable interior is gone – as it happened to most buildings. (Photo made by Giedrius Ilgūnas) 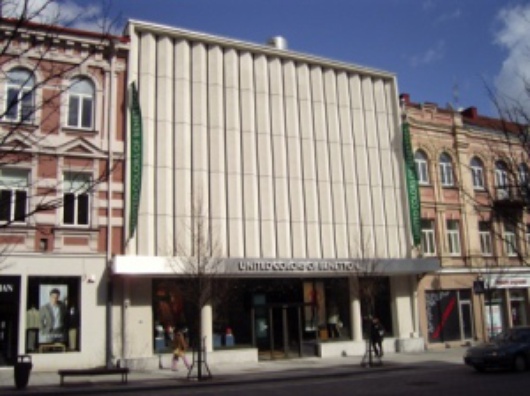 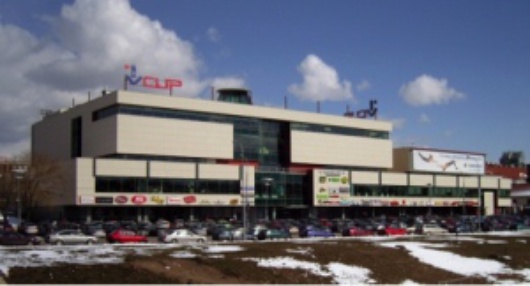 This retail center architecturally can be classified as an example of functionalism. It is included in a architectural heritage list, however it is not protected. During the reconstruction the facade was changed in volume and new materials were used for its decoration. The historical value was further decreased by erection of multilevel parking lots near by. (The first photo is taken from "Vilnius mažasis vadovas", 1988; the second one made by Giedrius Ilgūnas) 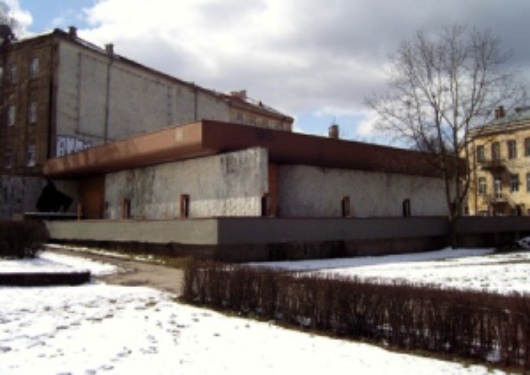 During earlier days the building was held as the best example of Vilnius modern architecture. Its style reminds of Le Corbusier‘s late period and Mies van der Rohe‘s pavilion designs. Building was not included in the heritage protection register and therefore its faith is in hands of its new owners. (Photo made by Giedrius Ilgūnas) 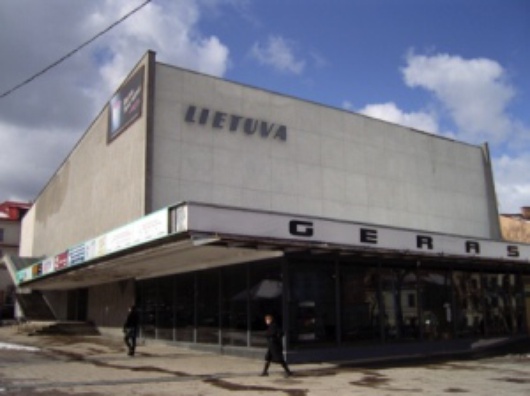 In 2002 privatized  theater primarily was important not as the example of modern architecture, but as the cultural center for most citizens of Vilnius. The current plans are to build a multistory apartment building.  However Vilnius citizens community is putting constant resistance and two separate law cases are being held in the courts. Therefore the license for demolition is still pending. (Photo made by Giedrius Ilgūnas)

In 2006 the palace was enrolled in heritage protection registry and it is advised to protect this building on the regional level. Unique architecture and the construct of this building is a renound world wide invention. Even though the building is a long lived symbol of modern architecture in Vilnius its fate is clouded. The municipal authorities claim that they will buy back the building from its current owners, however no real steps are being made. (Photo made by Giedrius Ilgūnas) 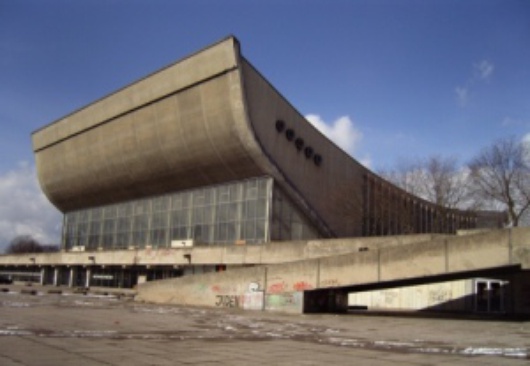