Brussels: Maelbeek station, the month after

A bit more than a month after the terrorist attacks, the Maelbeek station finally reopened on Monday morning, a bit after 6am. Very few-to-no people were present.

The first metro stopped at the station just after 5.30am this morning at the Maelbeek station, right in the heart of the European district. Over thirty days after the explosion that happened in the station – killing 16 people and  making over a hundred of injured people – the latter finally reopened to the public. But at 6am, while cameras were allowed and the STIB (Brussels’s Intercommunal Transport Company) spokesperson was here, there were many more journalists than passengers on the platforms. Media from Belgium, France, England, and Spain came to cover the event.

The station reopening concurred with the traffic returning to normal in the Belgian capital. Following the attacks, the metro stopped operating earlier in the day. It came back to the usual schedule from Monday morning.

« We are strong, we are united, we are Belgium »

It is nevertheless very hard to forget about the attacks which took place on March 22nd when you board on the metro at Maelbeek. Policemen and militaries were heavily present, especially on the day of the reopening. On the front of the station still remains all the flowers left after the attacks, intact.

But in addition to that, a big board was placed inside the station, where anonymous people wrote in support of the victims and the Belgian society. Among the messages can be read “Take care of the life around us”, “We are strong, we are united, we are Belgium”, “Je suis Bruxelles” or this message from the service in charge of helping the victims, “The heart of Mankind beats here”. This board was placed in an easy viewing position. “I read everything, I looked at everything and the thing that struck me the most was ‘Loves win’ and I share this thought” Tomaso, an intern working in the district, told us. 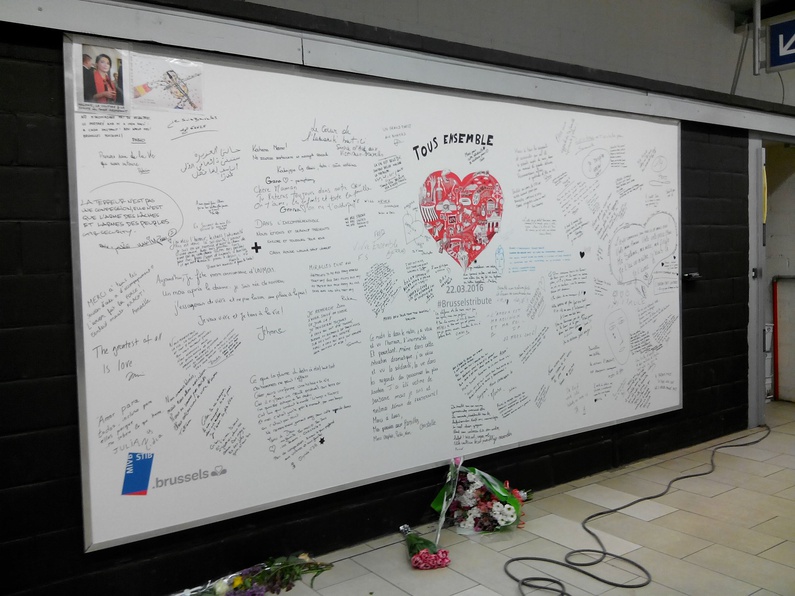 Even though the attendance rose by 8am, and even more an hour later, the influx of passengers was a lot less important than the usual. The reopening was not much advertised, perhaps for security reasons. Tomaso confessed: “I was a bit surprised because I forgot that they were reopening the station”. Moreover, there might still be a kind of fear and apprehension. “I think that most people get off the metro at the Arts-Loi station (editor’s note: the one right after Maelbeek, on the same metro line). I hesitated to get off the metro at Maelbeek myself. It is a bit strange to see all of this” Céline says exiting the metro.

However, some curious observers came especially for this day. Solène, a midwife student, is one of them: “I came to think, I put a flower down and I wrote some messages to support the families, the people who died, the people who survived. I do not think that I am the only one who came just to give a bit of attention to people”.

“We should not think about it; life goes on”

Passengers were either emotional or pragmatic. On one hand, emotional in memory of the victims, the images and of the surrounding climate after the attacks in the city. In this way, for Pietro, a former translator at the European Commission and now retired, “I think about all of what happened, I think about the flowers that were upstairs, that I already saw and that I hope this will not happen again”. “It gives me shivers, it makes me feel sad, so I came by really fast to go away from this place” adds Vanessa, a civil servant from the Commission .

But on the other hand, passengers want to move forward. Most people getting off the metro did not seem particularly affected or surprised. They were all rushing to go to work. And amongst the people who spoke to the media, they mostly seemed pragmatic. As Patrick who says that “it is a bit strange though, but we should not think about it; life goes on”.

After the events from the past weeks, the reopening of the station seemed nonetheless anecdotal. Even though Maelbeek will remain scared by the attacks for some times, it will not have consequences on Brusselers’ daily lives. From the mouth of the passengers, the police presence, as it became usual in the district, is not really striking. Life will go on in the weeks to come.