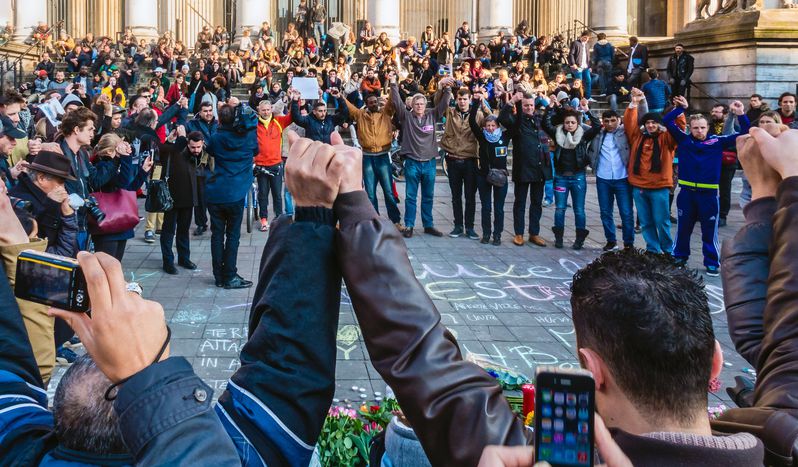 Yesterday, a series of bombings in Brussels left 31 dead and up to 230 injured. As messages of condolence and solidarity pour in from across Europe, opinions on how best to respond to these latest attacks have varied significantly. We spoke to Dr. Lee Jarvis, reader in International Security at the University of East Anglia, who argues for the importance of avoiding knee-jerk reactions.

cafébabel: Could you explain a little more about what you mean when you say that the Brussels attacks should have a cautious, measured response?

Dr. Lee Jarvis: By this I mean three things: First, exercise patience in attributing responsibility for the attacks. Even though "Islamic State" now appears to have claimed this, work still needs to be done to verify the claim. Moreover, the nature of contemporary militant groups is such that even genuine claims such as these may mean little, given that decision-making authority is not always centralised in a "core" of a group.

Second, avoid simplification and generalisation. Any attack we might call "terrorist" has multiple causes and is a product of interaction between individual decisions and social contexts. Let us neither simplify these to a discussion of the responsibility of, for instance, particular faiths, nor stretch the net of responsibility to individuals and communities entirely unconnected to these terrible events.

Third, try to avoid the temptation toward kneejerk political, or worse, military responses. The history of counter-terrorism is one in which dramatic events are often met with equally dramatic responses (that in turn frequently bring about more harm than good). It is also one in which the lessons of history – and the importance of dialogue, diplomacy and moderation within previous counter-terrorism campaigns – are often forgotten.

cafébabel: Given the increasing frequency of similar attacks over the last year, what needs to be done to ensure responses don’t escalate tensions further?

Jarvis: Evaluating the effectiveness of counter-terrorism efforts is notoriously difficult. First, there is surprisingly little reliable academic research – and no consensus – on the question of what works in this context. Second, there are no counterfactuals to which we can appeal to know whether things might have otherwise been different if something had or hadn’t been done. Third, counter-terrorism policies are likely intended to serve more than one function (including apprehending suspects, reassuring publics, deterring would-be attackers, etc.). Because of this, I think it is crucial to avoid excessive or exceptional responses – especially given the temptation (and often a public clamour) to do something quickly.

Militaristic responses to counter-terrorism are of extremely limited utility in ending terrorist campaigns: hence I would be very sceptical about the value of President Obama’s threat to continue "pounding ISIL". Moreover, draconian policies – and immoderate or deliberately provocative language – risk bringing suspicion and insecurity to communities associated (by others) with the perpetrators of attacks. So, there is a real danger that zealous or excessive responses to threats cause considerable harm to the lives of people around the world.

My work on British publics’ experiences of counter-terrorism powers with Dr. Michael Lister found that many individuals feel that post-9/11 initiatives directly reduce their own experience of citizenship, and leave them feeling personally less rather than more secure. These types of consequence, I think, need far more attention than they are often given.

cafébabel: You have said that the Brussels attacks should be viewed as a criminal rather than a military attack – yet similar attacks in Paris arguably initiated a military response. How do you view the process of ensuring this isn’t repeated?

Jarvis: My fear is that we will see elements of both: one of the responses to the Paris attacks was an escalation of air strikes against "Islamic State" targets, and – we might ask – what did these retaliatory efforts actually achieve?

I’m not sure that we can ensure this isn’t repeated, but we should continue to point to the limitations of exceptional forms of counter-terrorism policy, the fear-inducing effects of hyperbolic language, and the historical successes of negotiation and diplomatic efforts (as in, for instance, the UK’s campaign against the Provisional IRA).

We might also work harder to keep the threat of terrorism in perspective given that the direct risk this poses to individuals in Western Europe is absolutely minimal. Numerous studies have shown how any number of more mundane forms of violence – car accidents, for example – cause far more harm than terrorism. Yet, the relatively exotic nature of this threat means it – understandably – generates more attention and more fear.

cafébabel: There have been reports of misinformation circulating on social media following the attacks. At the same time, initiatives such as #PorteOuverte and other hashtags seek to use social media to provide assistance. On the whole, do you think social media is a help or a hindrance following terror attacks?

Jarvis: I tend to think social media – like all technology – is neutral: what matters is how it is used. In this sense, it is no different to earlier technologies used for the purposes of conducting and responding to terrorism, such as the telephone or the automobile.

I think that we might take comfort from the positive and progressive responses we have seen on Twitter and beyond, and the ability of such media to facilitate speedy assistance from "ordinary" individuals such as the offer of shelter and food. At the same time, such media have, of course, been used to scapegoat and demonise, as well as to misinform the public.

cafébabel: Speaking of the age of hashtags, how do you think that phrases such as "state of emergency" and "Brussels Lockdown" influence people’s reactions to events? Are these labels beneficial?

Jarvis: I don’t think so. To me they are an example of securitisation in which an issue – undeniably tragic for those caught up in it – has been turned into a problem of national security requiring exceptional responses. Such labels, I fear, close down public debate and encourage us to expect future attacks: to feel threatened by terrorism. Surely a more productive response to terrorism is to reduce – rather than escalate – the terror that it arguably seeks to generate.

cafébabel: On a personal rather than governmental level, what advice can you give to individuals about how to best respond in the wake of attacks?

Jarvis: First, remember that such attacks are newsworthy because they are so unusual: the likelihood of any individual being directly affected is minimal.

Second, by extension, bear in mind that the present is not necessarily a good guide to the future. We should, I think, be particularly wary of arguments that events such as this are part of a "new normalcy". We should feel no less safe today than we did yesterday because of these attacks.

Third, remember that all responses to such attacks – whether airstrikes in Syria or my comments in this interview – are a product of political values and decisions. There is nothing necessary or inevitable in how any individual or organisation responds to terrorism. There are choices we have to make, and trade-offs to be negotiated (are we, for instance, willing to see restrictions on civil liberties if we think this will make us more secure?).

Dr. Lee Jarvis is a reader in International Security in the School of Politics at the University of East Anglia (UEA) and an editor of Critical Studies on Terrorism. He is author or editor of nine books on the politics of terrorism, counter-terrorism and security.