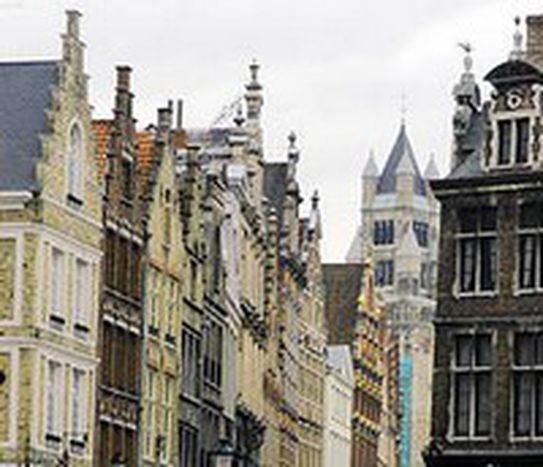 Francophone and Flemish, North African and Eurocrat… The European Capital mirrors the contradictions and cultural diversity of Europe

“Brussels is made up of an area of 19 municipalities and about one million inhabitants. For administrative purposes it is called the Bruxelles-Capitale region," explains Bruno Clerbaux, President of the Chambre des Urbanistes de Belgique. "Brussels has always been paradoxical: the city, in which approximately 90% of inhabitants are francophone, is situated in the middle of the beautiful region of Flanders, where the majority of the population are Flemish! The population therefore is accustomed to multiculturalism ". Moreover there are approximately 75,000 citizens from North Africa. But this is not all. More than 105,000 people living in Brussels are involved in the EU microcosm. This sector represents 10% of the region’s GDP and that occupies 3.5 million square meters of offices out of twelve. "This heterogeneity is easily visible when moving from one area to another," continues Clerbeau.

Brussels seems rather chaotic. It is fascinating to note its various architectural styles and the contrasts between buildings of mediocre contemporary architecture and the gothic style town hall in the Grande Place or the majestic cathedral Saint Michele. The city is patchwork of styles and "its desire to adapt quickly to change and to become the European capital has driven the country rather recklessly," insists Clerbaux with disappointment. "Entire neighbourhoods were destroyed and renewed in no time so that they could be sold or rented quickly. The intervention of the Belgian State was limited ". But this period of anarchy has ended, guarantees Clerbaux. In the future, international competitions will be organised for planned contracts.

Is the European Quarter too isolated?

The Italian architect Carlo Menon has lived in Brussels for five years. "The European quarter? It is an island. There has never been unity with the city," he maintains. "It was planned to be a central part of the ville, not like a ghetto in the periphery, but its relationship with society in Brussels seems limited." This echoes Romano Prodi, President of the European Commission, who said "I enjoy strolling in the streets, meeting people that I know and chatting about this and that. I believe that Brussels is too fragmented for this to be possible." Santo Vicari does not agree. Instead the Sicilian, who works has worked for the European Commission since 1985 on issues such as sustainable development, adds fuel to the debate: "The European quarter breathes with international lungs that do not isolate it from the rest of the city. These dynamics common to all great European capitals".

Umberto Eco: "Brussels does not need a monument. It is a soft capital"

"Brussels needs an important building: something symbolic and meaningful for the Belgians and for all Europeans," maintains Clerbaux. During the conference, Brussels - European capital? in October 2001, Rem Koolhaas agrees with him. According to the famous Dutch architect, "Communication about the European Union is lifeless. It needs to be represented through its buildings. In the last twenty years, it has required important headquarters and offices for numerous institutions, but this appeal has never been accompanied by an architectural preference, an aesthetic idea". In response, Umberto Eco described the Belgian capital as a ‘soft capital’ during the same conference and compared the European Union to a computer network in which Brussels acts as a server. "I want to laugh when I hear that Brussels needs an important monument, a Coliseum or Empire State Building! ‘Europe’ has to find a horizontal language of diversity and dialogue amongst cultures, not a hierarchical one," adds the Italian semiologist. The 48-year-old designer Eduard De Landtsheer also believes that the search for European architectural symbols is anachronistic. "Today Europe lacks power and faces a deep crisis. Building spectacular monuments will not foster a new identity".

But the mutations of urban planning in Brussels go beyond the European quarter "Since the end of the eighties" says Menon, "the entire neighbourhood from Rue Danseart and Sainte-Catherine has become a meeting place for artists and homosexuals. They have opened clubs and bars, galleries and fashion houses". The result? Today also that zone is populated by locals. Similarly a fast gentrification process is pushing immigrant communities out of the centre. It is amusing to see that the Arab cafés, sophisticated bookshops the new the Apple store are present in the Rue Dansaert.