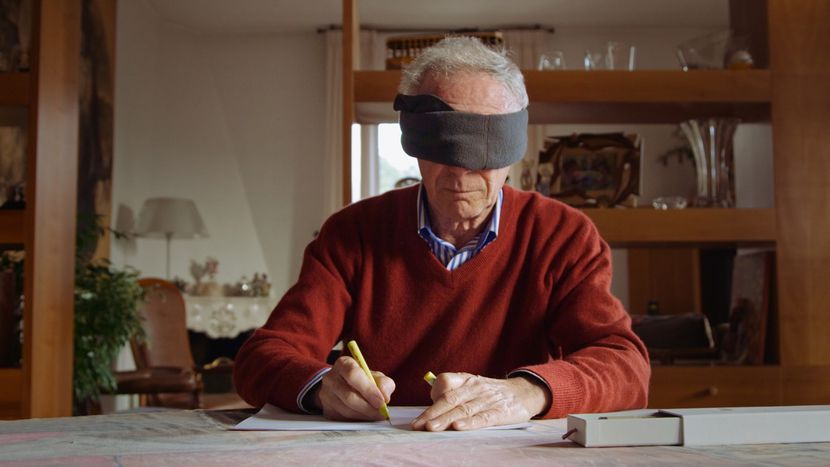 The animator who has made the history of Italian drawing talks about himself on the occasion of the coming out of the documentary dedicated to his career. The so topical spontaneity of his characters reveals the true mal de vivre of young Europeans who are confused, but not too much

Bruno Bozzetto, 79 years old. He doesn’t seem a young European at first glance, right? To the detriment of his age, he has so much to teach about young generations. His mind’s fast and his hand too when he takes his pencil ready to draw.

He loves  walking in the fresh air and  Miyazaki and moreover he revolutionised animation in Italy. While the digital and avant-garde generation is looking more and more for form’s perfection that sometimes makes you loose the sight of the substance, Bozzetto is struggling against contents’loss and the confusion that comes from that. On the last Rome Comics Festival there were thousands of guys lined up waiting for his signature because  the creator of the famous Signor Rossi is still the creator of new ideas ready to be animated.

Recently the film-maker Marco Bonfanti has dedicated a documentary to a real life lived in the spirit of animation, the documentary’s title is "Bozzetto non troppo" (in Italian Bozzetto means sketch so the sense of the title is “Sketch not too much”). On the occasion of the screening of the film at the Kino cinema in Rome, we meet Bozzetto on a red sofa between an aperitif and  a toast in Pigneto. He’s relaxed  and seemingly benevolent, he’s waiting for us with a smile and willing to share his stories.

Bruno Bozzetto never points his fingers but he creates amazing characters. During the years he has dealt with political, environmental and social issues  and today his films are cult classics. Particularly, a lot of generations know his small man with a big nose, dressed in red, holding a briefcase ready to face life. So we ask him: who’s  today Signor Rossi? How does he live modern times?

“Mr. Rossi is just a caricature of his personal matters” says amused to us Bruno Bozzetto or the Maestro as his friend, who are waiting for him, call him. “He’s the emobodiment of the average Italian who faces the problems of his society. Bureaucracy, politics, culture…world hasn’t changed too much in the last 50 years”. Mr. Rossi, it has to be said, has forestalled a trend which is more than current  for us  addicted to Netflix series: historically we can talk about the first non-promotional nature TV show (not by Carosello) that’s ever been done. The intuition of a guaranteed success dictated by the resubmission of the same character in different contexts but with the same pessimism that allows him to face different situations in the funniest way but, in a sense, also tragic.

“If you see something for three times, you won’t remember it surely” says the Maestro “maybe if you see it 30 times you start to think about it…300, 3 thousand times, the deed  it’s done, that thing has became famous, is everywhere, it’s in your head, has spread its message and you have your brand that everybody link to you. Simpson is the longest tv show, have you ever wondered why is it so famous? Because it talks about the common man to the common man.  If I talk about us, about the little big problems around us, I can talk about it for years without be boring. Sources never end. Problems and current events  never change for this reason: Mr. Rossi is always the same, the same man who has to face ecological problems for example”.

“But, let’s start from the beginning of this story. Mr. Rossi too was born by chance but not too much”.  Bruno Bozzetto emerges with the first short cartoon entitled Tapum! La storia delle armi (Tapum! The history of weapons) screened at the Cannes Festival. This work doesn’t pass unnoticed,his style stands out for the great simplicity of lines and for his careful observation to the human race. “As I define it, entomological”. And this careful observation is reflected in the funny but also disenchanted production of the mistakes, the mediocrity of the human being and of the time he lives .

In 1960 he creates the character that makes him famous and that is the protagonist of our interview: Mr. Rossi. That's’when this little man born, he’s enthusiast and very simple but he’s also furious when things don’t get his way. Mr. Rossi will be leading seven short films, three feature films and he outlines little by little the unique style and the ironically pessimist critique of the artist.

The analysis of contemporary society continues with  one of the most maybe succsessful feature film: Vip-mio fratello super uomo. (Vip-my  brother Superman) 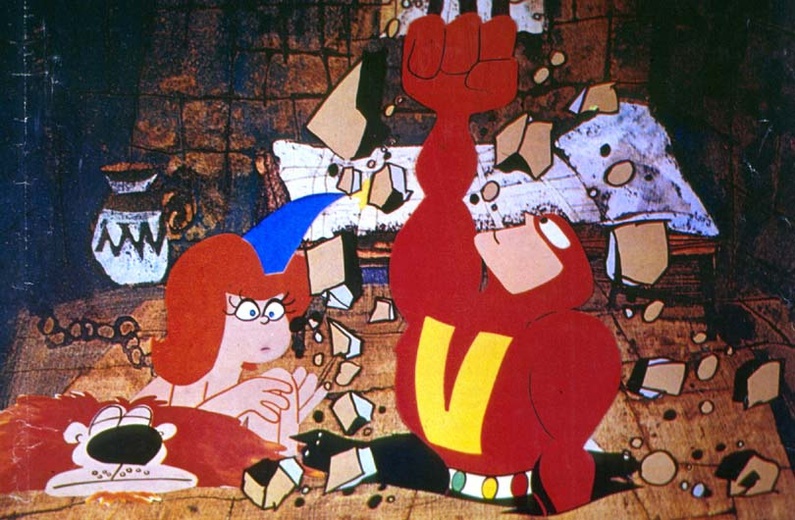 “The movie recalls the events lived by the popular superheroes of that time, especially 007- says Bozzetto with a pinch of irony- and it highlights the risks for the human beings who are absorbed by the consumer society, loosing every rational capability.”

Then, there will be the feature film Allegro non troppo, “that’s my answer to Walt Disney’s Fantasy- explains the author-we had a lot of fun during the realisation of this film. Someone has even wrote a graduate thesis on it!”. Then in 1987 Sotto il ristorante cinese, inspired to the science fiction of Zemeckis. During the ‘80s Bozzetto dedicates himself to the dissemination of scientific knowledge realising a hundred of educational films for the tv programme Quark. He started to be rewarded, with his Mister Tao that receives the Golden Bear at the Berlino Festival in 1991 and the following year Cavallette is nominated for the Oscar.

“It attracts me seeing man in the nature- pours out Bozzetto- the pretentious and arrogant man who thinks to be the ruler but, actually, he  means nothing. Human being is destroying everything and as a cancer he’s  spreading on every side of our planet. So that’s my duty trying to entertain and possibly talking some sense into the human being on such a current  topic  as this one. We’re part of this destruction  but putting the human being in my cartoons we can see it from another point of view.”

A strong position, of course, but far from being unfounded as Bruno Bozzetto highlights. He loves being updated on global problems and checking  the major scientif journals. And we surely have to believe who has made of his own house a real haven from the greyness of cities. He lives between trees and animals that live peacefully  in a similar parallel and bucolic reality. Beeelen, for example, is Bruno Bozzetto’s sheep, a sheep that believes to be a dog and that’s a big success on social networks. And social networks are another main point of nowadays youngs’lives.

“Young but not too much” clarifies the Maestro “social networks are one of that things that change completely our lives in small and large ways”. It would be funny to see some sketch of Mr. Rossi dealing with new medias. “On Twitter everybody can comment using the same characters both an idiot or a Nobel laureate but we have to  filter it of course. However I’ve  discovered also  a contact through Facebook, a relation that you  certainly cannot have publisihing your cartoons on a newspaper. I publish a cartoon and I can see at once the reactions and conversing immediately on contents. I can analyze directly the audience’s taste, having a reaction”. So, social networks are a double-edged tool  that more than any other instrument distinguishes the shift between yesterday and nowadays, Italian and European Mr. Rossi.

“I think that nowadays our main responsibility is, as we said, knowing how to filter . We’ve never been so confused and we’re not sure where to turn and who we should listen to. You can have news on what’s  happening on the other side of the globe in less than ten minutes, but believe me, it’s not always so positive collecting all these news without having a real control on it. We’ve never been so confused as we’re nowadays, the more informations you have the less you know. Who filters and how does he/she filters? So, if I had to draw a european Mr. Rossi of our time, I would portray him CONFUSED”.

Human being, base instincts never change for the Maestro. Surely the European Mr. Rossi has very specific qualities, different from that of an American, a Russian an Australian. Of course he has to change Mr. Rossi’s look and moustache dating back to ‘60s, but the real dilemma here is how to condens various cultural and behavioural aspects in one sketch. Right, Italy vs Europe, a short film which is one of the first animations realized through Adobe Flash. It makes us smile on habits that are immutable until now, it says a lot about a model of behavioural perfection inconsistent with the unceasing negligence and why not, indolence of the European Italian compatriots. “This film is dedicated to those who believed that Italians behave the same as all other Europeans”.  A biting irony that shows exactly common situations, from traffic rules to politics, from sport to the queue to join theatre, it takes to extremes the good behaviour of the average European citizen in contrast to the most vivid Italian neighbours’ s invective.

“My advice to this generation? Reading, reading more of course. Being a pearl in the dirt. Mobile phones are extraordinary instruments but they’re distracting, they make you loose the time to think. You have always in your hand  the opportunity to see, to contact, to hear to be…wonderful instruments but so harmful, they absorb your reading time, the time you have to discover yourself. It’s not by chance that the average level of concentration has fallen to 8 seconds. We have a serious prblem with concentration. One has to be vulgar, violent and different at any cost to get somebody’s attention. It’s no longer possible to realize something refined, they won’t look at you anymore. That’s my critique instead: leaving behind for a while style, beauty, the pursuit for perfection at any cost to find again substance, your own real ideas”

Entertaining to talking some sense into heads. Maybe the much-vaunted multi-tasking of our digital era could be both good and bad at the same time. Knowing when to stop and to specialize ourselves without chasing that perfections that brings you to know how to do everything and nothing, doing it without sense, technically, superficially. The answer is in the silence for Bruno Bozzetto. “I didn’t attend a drawing school. I’ve discovered words’values drawing cartoons. But it’s more difficult spreading something without a dialogue. The only thing you can use without words is head! And that’s how Mr. Rossi’s average Italian citizen have a lot of visualizations in Germany and Saudi Arabia…but what the heck do Saudi see in my films?! The answer lies in universal language”.

Certainly, instagram, snapchat or tinder followers know much more on this universal and globalized language than we can actually realize.