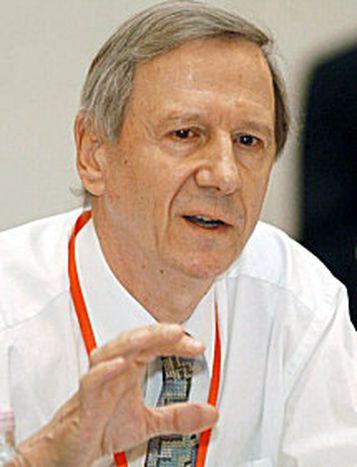 Friday afternoon British sociologist Anthony Giddens gave a public lecture at Tallinn University, recalling his ideas on the “renewal of social democracy” and outlining his view on its present problems and future perspectives in Europe.

The audience, mostly students and researchers, attended a refreshing and encouraging public lecture on the need to constructively intervene in politics and society on a scientific basis. It remained unclear, however, if and how the promoted “third way” − a concept which originated intellectually and politically in Great Britain in the 1980s and late 1990s −­ can provide a clue to domestic Estonian problems and enrich scientific debate.

Famous for his 1998-bookThe Third Way, that accompanied a European-wide rise of social democratic parties to power, Giddens is a wanderer between the realms of science and politics. As a “left of centre person” he renewed his argument to further modernise the left, in order to reconcile key values such as solidarity with the major challenges of globalisation and the erosion of traditional class structures. Witty and in clear words Giddens advocated his vision of a political alternative beyond a first, socialist and Keynesian and a second, Thatcherian way of market deregulation. Further on, he touched upon the global financial crisis and the election of Barack Obama, declaring these two events as promising signs of a possible reawakening of social democracy throughout Europe.

While the idea of a third way sounds convincing at first, it lacks depth and does not offer much more than a reformulation of an ageing concept. At any rate, Giddens did not find surprising new answers in the face of pressing contemporary problems of the global economy, climatic change, a (more) democratic European integration and rising global inequalities. This shortcoming of Giddens’ view became most apparent in the near absence of Estonia or even the new EU-member states in his speech. As a consequence, these issues only popped up as general historical references to the failures and the breakdown of communism − or as playful joke about the presumably reserved character of the Estonian people. The latter however, as the amused speaker voluntarily admitted, proved to be a false prediction.