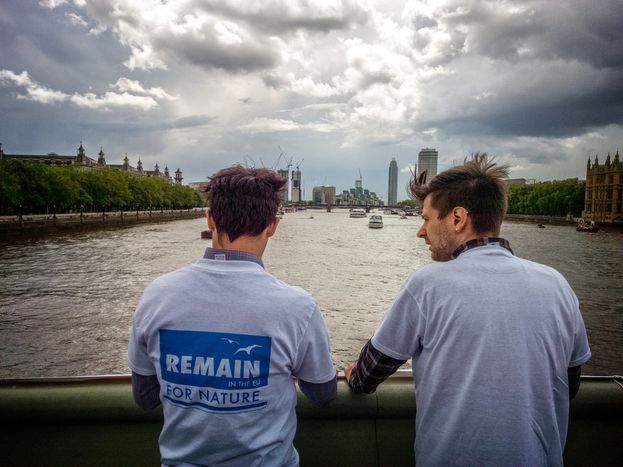 For the first time in history a country has voted to leave the EU. Just under 51.9 percent of British voters cast their ballots in favour of Brexit, while 48.1 percent voted to remain. Prime Minister Cameron has announced his resignation. Is this just a warning for the Union to get its act together or the beginning of the end?

The Scots and Northern Irish, a majority of whom voted against Brexit, may now want to split from the predominantly anti-EU English, the Financial Times fears: "The nations of the United Kingdom divided; and England split between its metropolitan cities and post-industrial provinces. … A vote against the EU could well turn out also to be a vote against the United Kingdom. The Brexiters were English nationalists. Scotland and Northern Ireland wanted to remain. So did London, the pre-eminent global city. So the leaving of one union may be the death of another. Who could blame the Scots for preferring Europe over an England turned in on itself? How long before the English tire of picking up the bill for Northern Ireland?" (24/06/2016)

A mirror held up to Europe - Il Sole 23 Ore, Italy

The EU will have a hard time recovering from this shock, Il Sole 24 Ore predicts: "The EU has been 'Brexitising' for some time now - overcome by the wave of anger, frustration and disappointment from its citizens. In this sense the real Brexit is like a mirror that mercilessly reflects the bad conscience of Europe - a union that has been at odds with itself for years. The negotiations with London will be tough and complicated, and this time - unlike in the past - there will be little willingness to compromise because the priority will be to deter others from following suit. To make matters worse general elections will be held in the Netherlands, France and Germany next year. The first two have been under unbearable pressure from nationalism and Euroscepticism for years, while the third is suffering from an anti-migration and anti-euro syndrome." (24/06/2016)

Cameron's referendum was a bad idea from the start, Helsingin Sanomat rails: "The shocking results on Friday morning show that the Conservative Prime Minister David Cameron took a decision that was fatally wrong from the start. To strengthen his position and that of his party, Cameron promised the British a referendum. He knew how widespread Euroscepticism was in Britain, and he knew that such plebiscites are not always decided by the issue at hand. Nevertheless he took the risk and promised the referendum. Now it's time to bear the consequences. ... The stakes were high, and Cameron has lost - as have Britain and the entire Europe Union." (24/06/2016)

Which exit comes next? - Berlingske, Denmark

The chain reaction has begun, Berlingske fears: "'Today we discuss a Grexit, tomorrow comes the Brexit and the next day it will be the Frexit' the leader of Front National Marine Le Pen said a year ago. And in the Netherlands too, where a clear majority voted against an EU trade agreement with Ukraine in an April referendum, a referendum on the EU could be on the agenda if EU critic Geert Wilders comes to power next year. … There is talk of a Nexit. And a Danish exit - a Dexit - is already being mentioned in connection with the Frexit and the Nexit on social media. And last but not least, EU enemy number one Nigel Farage predicted that a Brexit would be followed by a Dexit and a Nexit and then the complete collapse of the EU. … The word playing is likely to continue." (24/06/2016)

Will the EU break up like the Soviet Union did? - Duma, Bulgaria

If any more cracks open up in the EU peace will be at stake, the socialist daily Duma comments: "The British are disgusted with the EU and its leadership. Juncker's behaviour towards the British - and others - has been repulsive and arrogant. The EU is a symbol of thick-skinned bureaucracy, absurd quotas and unrealistic regulations. In such an unhealthy environment it's no wonder nationalism is thriving and many European countries want to abandon the sinking ship. Nonetheless, we saw in the 1990s what happens when a union collapses: the Armenians, Georgians and other ex-Soviet republics were at each other's throats. Could it be that similar conflicts break out in the EU? … Absolutely! Brexit or even the collapse of the EU won't trigger war, but the risk of conflicts breaking out will increase considerably." (24/06/2016)