Brexit vs Bremain: The Great Wait

Three weeks before the referendum in Britain, the EU supporters' lead in the polls is shrinking. According to a recent survey Bremain has dropped from being thirteen to five percentage points ahead of Brexit in the last week. Commentators assess the two campaigns and discuss the potential repercussions of the referendum.

The EU as we have known it for decades could disappear almost without resistance, Der Standard fears: "Behind the scenes everyone is quaking at the thought of the 'unthinkable'. Indirect proof of that is seen in the commissioners' behaviour as regards Brexit. They're avoiding official trips to the UK. Even Juncker isn't lifting a finger to woo the Brits. Apparently people in Brussels think that staying away will do more for the Bremain camp than showing a strong presence. A sad state of affairs. The Juncker team came into office in 2014 with the aim of being a 'strong political Commission' that wanted to bring the EU forwards internationally as well. ... The EU states have many good reasons for doing their utmost to keep London in the pack. But the way things look now they couldn't care less one way or the other." (01/06/2016)

A Brexit could deepen the inequality within the EU, La Tribune warns: "How the EU would deal with Britain after a Brexit is still not clear. Regardless of what they have said during the Brexit campaign, exporting countries like Germany, the Netherlands and Ireland would do their best to cut their losses by preventing trading conditions from worsening. ... For political reasons France could put its foot on this brake with the possible support of Italy, where Matteo Renzi is being threatened by Movimento 5 Stelle, Ukip's ally in the European Parliament. One thing is sure: a 27-member EU could get caught up in contradictions. And the French-German tandem could become the collateral victim of a Brexit." (27/05/2016)

Brexit supporters often complain that EU institutions lack democratic legitimation. Journalist Imke Henkel contradicts this view in the London School of Economics' EUROPP blog: "The EU is distant, difficult to understand, often non-transparent. However, the EU is not un-democratic. Like the British government, the European institutions are legitimised through a representative democracy. The British prime minister is elected by his party, not the people. … If we were to argue that the EU is democratic, then we would point out that EU commissioners are appointed by national governments who have been elected by the people. … The EU parliament is elected by the European citizens in each country. The EU Council consists of elected ministers and head of states of each country (and the Commission is, as stated above, appointed by national governments and subject to a vote by the European Parliament)." (31/05/2016) 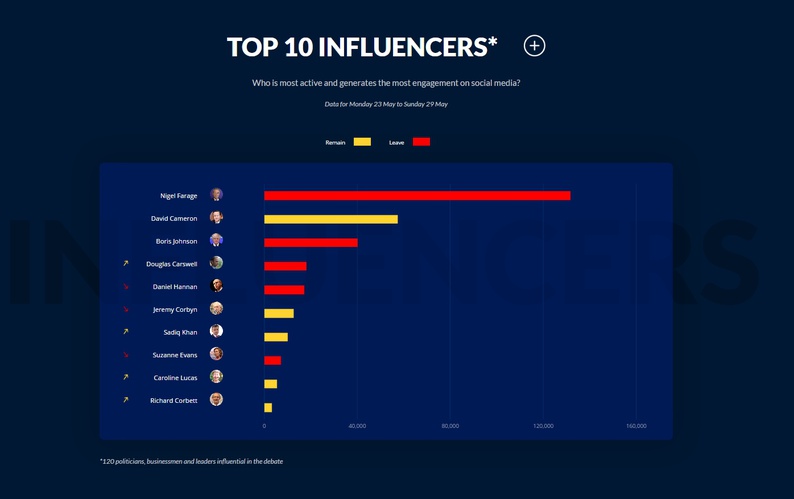 The Bremain camp shouldn't rely only on fear in its arguments, writes columnist Ferreira Fernandes in Diário de Notícias: "With just three weeks to go before the referendum those who oppose Brexit are using arguments based almost entirely on fear: they talk of the economic disaster that would ensue, the disinterest of Arab and Chinese investors and an isolated City of London, retaliatory measures from Brussels. Now they may be right, but the opponents of a Brexit should also be able to present other convincing arguments like political and cultural interests or Europe's common destiny - but apparently they don't really believe in these things themselves." (30/05/2016)

Those in favour of leaving the Union have the better buzzword for their campaign, The Irish Independent reflects: "Brexit has so much more punch than Bremain, which sounds like an unusual surname or a brand of medicine. So it's not surprising that Bremain hasn't really got off the ground. And what alternatives were there? 'Bray' for stay is about it. … So Brexit it is, and so successful is it that the 'remain' side are actually talking about whether people should vote yes or no to Brexit. This is a victory for leave because already, by talking about Brexit, we are - subconsciously - prepared for a British exit." (30/05/2016)

And what if the Brits remain? - Le Monde, France

In view of the British Chancellor of the Exchequer's warnings against a Brexit, Le Monde advises working out a strategy for the scenario of Britain remaining in the Union: "A victorious David Cameron will want to foist his political agenda on Europe, with a revival of the single market, a de-technocratisation of the EU and a more active role for national parliaments. Such aspirations are praiseworthy, but we must be careful not to underestimate the resulting political dynamic: a 'Bremain' risks reinforcing economic convergence between Germany and the UK, Europe's two biggest economies. ... If it doesn't want to be marginalised, France must prepare a real plan B for the Eurozone and for the 28-member EU. If the Brits remain, the French must strike while the iron is hot." (28/05/2016)

Poland would be more important after Brexit - Rzeczpospolita, Poland

Rzeczpospolita, by contrast, sees the prospect of the UK leaving the EU as a chance for Poland: "The economic and security policy ties between Britain and the EU are so close that even a Brexit won't change anything here. So there is life after Brexit. … A Brexit would by no means spell the end for the Union but simply pave the way for its thorough overhaul. Poland is the biggest country outside the Eurozone, meaning that it would like assume a more important role within the EU. So let us not regard a Brexit as a disaster but as a chance to bring our own ideas into this restructuring of the EU." (30/05/2016)