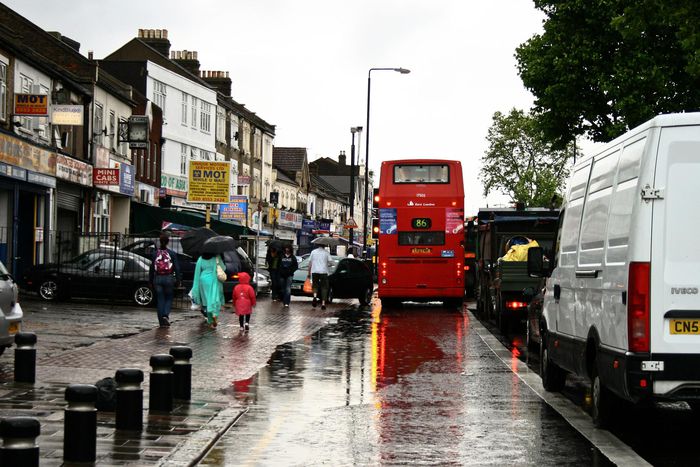 Brexit: The view from Britain’s most Eurosceptic town

In the east London suburb of Romford, the local council has become the first to declare itself in favour of the UK pulling out of the European Union. Yet the generational divide is still clearly visible when it comes to a potential Brexit. A local perspective from the "most Eurosceptic" town in the country.

Romford: an east London suburb without much claim to fame save for its "wild Saturday nightlife" and local residents’ strong regional accent. It is, however, steeped in history: its market was first held in the 1240s with permission from Henry III, at a time when sheep were the traded commodity. As London expanded the area has inevitably transformed, but since 2004 it's the EU’s expansion that's been changing Romford.

Romford’s MP Andrew Rosindell makes it clear he’s "not against people from other countries coming to live in the UK". However, the constituency is also a safe Conservative seat – in 2010 winning by a majority of more than 35%. Interestingly however, in the last election the Tories dropped 10% to the benefit of the Eurosceptic UK Independence Party (UKIP).

On the 29th of January, Romford’s town hall voted to back the campaign to take the UK out of the EU. As Britain’s first local authority to do so, it sent a strong message. Rosindell firmly backs the "Vote Leave" campaign. When interviewed, he said that "the problem with the EU at the moment is that you cannot refuse anyone from the EU". Despite professing to believe that "the idea of European co-operation is a very good idea", he thinks this should only be done "on a bilateral basis".

Cafébabel heads to the high street

Do people in Romford feel the same way about Brexit? Conducting a straw poll of under 30s in Romford’s town centre is an interesting exercise in and of itself: the majority of young people surveyed had foreign accents, and most who had time to respond supported the status quo.

John (22) was originally a student from outside the EU. Having lots of European friends, he says he would probably vote to stay in the EU, but doesn’t yet know if he will.

Sigalli (18), an economics student, is a bit more clued up. She cites the UK’s current account and balance of payments deficit as useful aids to help decide whether to stay in or out. For her, "staying inside the EU has more economic benefits than staying outside".

But economic arguments don’t stick with everyone. Gurjeet (33), of Indian heritage, cites her experience of Indian visa requirements. Compared to this, she doesn’t think it would be so bad for UK citizens to travel to Europe even in the case of a Brexit. According to her, "most people go once a year, twice a year for their Christmas holiday or summer break" so that "unless it’s a business thing, it’s not going to affect the average person".

Nicole (24), a social therapist, and Mary (25), a project officer, both thought that the UK would "still have immigration problems" and "less benefits" if it left the EU and that trade would suffer because of the impact on imports.

According to our findings, it seems to be the case that a generational divide separates opinion even in Conservative Romford – as it does nationally. In February a YouGov poll showed 75% of under-25s would vote to remain, while close to 70% of over-65s would prefer to leave. Because of differences in voter turnout, three pensioners will vote for every two voters under 25. The UK’s "EasyJet generation" may have a lot of persuading to do –especially in Romford.

Immigration: That 500 million Europeans have the automatic right to come and claim benefits in Britain – a deliberately provocative argument that implies Europeans are lazy, don’t have enough state support and all want to live in Britain. For Europhiles, that fellow British citizens should imply such things can be quite embarrassing.

Security: That freedom of movement makes Britain less secure. Awfully, recent terrorist atrocities have bolstered this argument. However, it doesn’t take into account the possibility that terrorist sleeper cells could also be present in the UK or Internet accessibility to radicalising websites. The implementation of the European Arrest Warrant suggests the EU has actually improved security.

Trade: Brexiteers regard the EU’s institutions as unresponsive and find their bureacracy asphyxiating for business, viewing bilateral trade deals outside the EU as holding greater potential. However, previous trade deals have taken years to broker. The impact of an exit would create uncertainty that trade with developing economies wouldn’t be able to offset –given that China, India and Brazil combined receive barely more than 5% of British exports, whilst the EU receives 44.6%.

Law: The sovereignty of the UK’s courts. Currently, the European Court of Justice has the final word on EU law. However, since EU law supersedes national law, and because some of its past rulings have been controversial, it hasn’t inspired confidence in everyone.