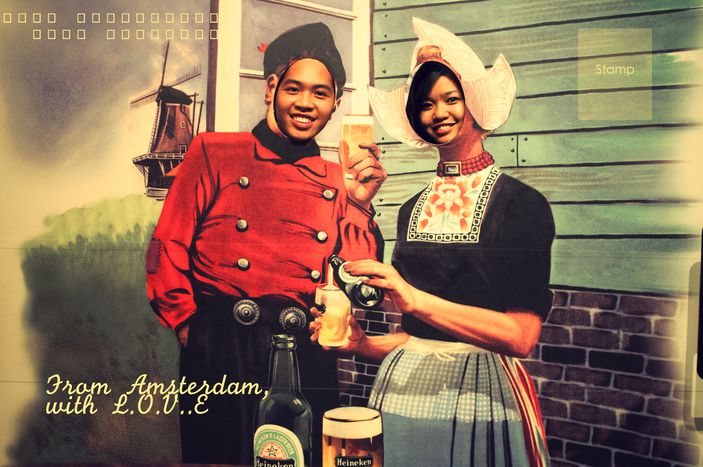 Why do we all go to pubs? What do they mean to us? Do we feel the best there? And what kind of characters we meet in the pubs? To answer some of my questions, maybe you can find through the several examples I will give you below.

When I moved to the Netherlands, I was supposed to find any job as soon as possible. My girlfriend didn't have a salary big enough to cover all our expenses, but I wanted to start contributing to our household in the best way I could. As I graduated from journalism studies in Sarajevo, I wasn't the best possible candidate for many Dutch companies. They usually asked for the Dutch language, wanted me to have an economics, management or IT background, and so on. One of the quickest options was to find a job - in a bar.

In Amsterdam this was quite easy. You don't have to search for job through the internet. The best way to find a bar job is to enter all of them you ever liked. If you were a regular customer there, then it's even easier, but as I don't drink at all, I wasn't so happy to be the one who people know. After a few days I was desperately looking for any possibility, and when I was about to give up, I got the chance to work in a REAL IRISH PUB. That was probably the 50th bar that I entered and I didn't expect much, but later on, it would turn out to be the best year in my life.

During that year, I met many various interesting characters, from extreme alcoholics to the people who had nice families, great jobs and lot of opportunities in their lives. All of them, including bricklayers and masons, scavengers, drivers, office clerks, managers, journalists, bartenders, waiters, receptionists, car sellers, failed footballers, professional gamers, lawyers and so on; all of them have one thing in common - they like to be in the pub; they like to talk hollows; they like to get relaxed and not to think about their everyday duties.

I don't know how many of you know the BBC's series Only Fools and Horses, but if you don't, I strongly recommend it to you; in this series the pub is represented like the only place where there are no social differences. Even if there are, everybody's communicating with each other, everybody is open to talk, and everybody is too honest when drunk. The most of them like to watch football, know nothing about the world's politics and for them society is not wider than their own one. They can be very stingy or very generous, very smart or very stupid, very interesting or very boring, but in the pub they are all one. Some of the very best moments from the series, you can see below. One of my special articles will be dedicated only to this series.

Like in the series' pub, I also met many different people, from all different social groups. First of them is Guido, a Dutch - Indonesian semi - professional lawyer whose second house is a pub. Guido's only and the best friends are those who work in the pub. All his social activities happen there and besides his job, this is the only place where he goes. He has come to O'Donnell's since November 1995, when the bar opened. He's famous for his cold and honest humor, 'black - yellow' skin (as we joked) and Chinese eyes. We all liked him for his honesty and charm - even if he wasn't such an interesting character.

The next one, but not less important, is Dillon. The freshly divorced English man had two half - Dutch children, supported Chelsea football club, groused when speaking and was drunk every Wednesday, Friday and Saturday. He left school when he was sixteen, but he has very nice job, at one of the Dutch banks. On Wednesday he's drunk because he doesn't work Thursdays. My experience with him are quite positivs, even though I didn't have a chance to have a proper conversation with a sober man, but only with Drunk Dillon. His best friend is Gary, a bold English man with a Dutch girlfriend who supports Sunderland. I don't remember Gary in any other condition than devastated. Dillon is always grousing (sort of mumbling) and sometimes it's impossible to understand him. Last time I saw him for New Year's Eve, he was pissed again and he looked still the same. I liked his mumbling English and his kisses to everybody, no matter whether you were man or woman - that's not typical for English people.

During the world rugby championships in 2012 we were opening our pub at 6am, because of the time difference with New Zealand, the tournament's host country. I was usually in charge mornings, considering that I was the only worker who didn't drink alcohol and was able to wake up early. First morning I made 134 coffees for all different human beings around, which never happened in the bar's history before. People were usually coming there in the morning and ordering pints (half litre beers), no matter if it was 10am, 2pm or 9pm. This morning was obviously too early. Next to the beers in the morning, we were selling full Irish (or English, there's no difference) breakfast. I would probably rather drink the strongest alcohol than taste one of these nine things from the full breakfast (bloody and white sausages, potato bread, baked beans, etc.). But okay, I am neither Irish, nor British, so I don't have to be used to this kind of food. Lee, the character that I want to mention next, was the one who liked to eat a 'full breakfast' every morning. Lee is a hard - working toiler, who never helped me to finish my wall holes, but was a very nice guy, supporting Liverpool and often having no money to pay his 'vaasje' (Dutch name for 0,25 l beer). He always paid 'tomorrow', but honestly, never forgot. During the rugby World cup, he also drunk coffee. It looked strange.

Before the end of this pub chapter, I'll say something about Seamus. Seamus is the Irish version of the name James, and usually hard - core catholics were named like that. Our Seamus was agnostic, believed in no god, and was ready to discuss on this theme for hours. For all of our twenty members' crew, he had a proper word and sentence of understanding. With Helena, he spoke about fashion, with Kali about arts, with me about journalism, and with Attila about architecture. The only man who didn't really speak often with him was Dave - the English man who had the longest experience working there; Dave was quite fed up with him and he didn't like reciting Irish poetry after midnight. But, that was Seamus, and we others liked it.

He didn't have any family, nor a dog or a cat. He never talked about private things and he never appeared publicly. He was a bit paranoiac, but in the same time very funny and likeable. I used to call him the walking encyclopedia, because every time I asked him something, he had an answer ready from his sleeves. Now he lives back in Ireland, in the place from you can physically see the Sixth County. I am not sure which one of the 'castles' on that coast, but I hope that he lives regally. He deserves it.

After one year working there, our lovely Irish owner sold the pub. Months before that, we were speculating when and for how much money he would sell the pub. Unfortunately, it happened in March 2012 and we were told very surprisingly about his decision. The new owner, domestic idler whose father paid the pub, fired us all.

And at the very end of the chapter, I will suggest a Serbian TV show, where the guest was John Challis, the actor who played Boycie in Only Fools and Horses. Here Challis describes the characters from the series, mainly met in the pub, as how he counts them, so I remember them from my life.

I could also mention here many other people, such as Mark from New Zealand (fashion judge, originally Aborigine and gay), Natalie from Amsterdam (dentist, pissed every few days, and then having a huge, 'divorce' fight with her Austrian husband), the manager Dionne from Scotland (who was impossible to understand in the most important moments), Pawel from Poland (our cook, who used to come often and drink for free, like every proper Polish), and many more.

I hope the unmentioned ones will not take it personally...

I would ask you: do you have special pub characters from your own going-out place?