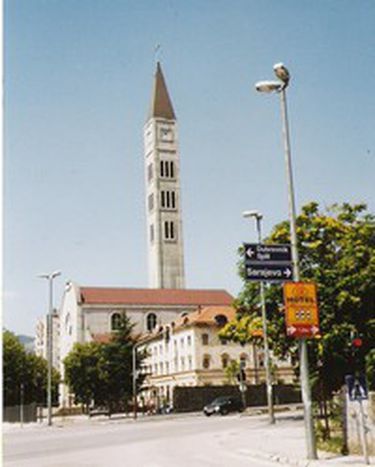 Bosnia to join the EU?

Exactly ten years have passed since war-torn Bosnia-Herzegovina signed the Dayton Peace agreement. Now, the EU has given the go-ahead for talks which may lead to its eventual entry.

“Bosnia is like Frankenstein’s monster – it has been sewn together with force.” That was the analogy which Senka Kurtovic, editor-in-chief of the Bosnian daily Oslobodjenje, used in an interview with the German newspaper Die Welt. Kurtovic’s bitter diagnosis is based upon a political reality: since the end of the Bosnian War in 1995, the Balkan state has been split into the Serbian Republic and the Bosnian-Croatian Federation. Both regions share one government, but all other institutions are separate.

One day, however, the EU could grant entry to this “monster”. Slowly but surely, Bosnia-Herzegovina is moving ever closer to EU membership, even if accession is currently in the fairly distant future. The EU Commissioner for Enlargement, Olli Rehn, made it clear in September, when the national assembly of the Serbian Republic rejected a key police reform package, that the door to EU membership would remain firmly closed until such time as both Bosnia-Herzegovina’s parliaments agreed on the matter. On October 18, this long-awaited reform of the police force was passed, uniting the previously separate police units of the Serbian Republic and the Bosnian-Croatian Federation into one multiethnic force. With this, the country fulfilled one of the most important criteria for the opening of negotiations on a Stabilisation and Association agreement, through which the states of the western Balkans are to slowly draw closer to the EU. The negotiations are due to start "at the earliest opportunity", after they were given the green light by EU Foreign Ministers on November 21.

The idea of Bosnia-Herzegovina joining the EU is not new. The prospect of membership was first put forward at the June 2000 EU-summit in Feira. Then the Balkan Summit, which was held in 2004 in Porto Karra in Greece, sent a clear signal to Bosnia-Herzegovina regarding EU membership. It was noted at the summit that “encouraging progress” had been made, and by now a set date for membership was being contemplated – Richard von Weizsäcker, member of the International Commission on the Balkans founded in 2004, ventured 2014 for this. But before then, Bosnia-Herzegovina must clear a lot of hurdles: the country must solve contentious constitutional questions and must fight corruption and financial mismanagement.

Despite progress in 14 of the 16 areas which the EU Commission declared to be in need of reform, the Commissioner for Enlargement, Rehn, emphasises that two significant problems remain: the new law governing public service broadcasting and the actual implementation of the reform of the police force. Then there is the issue of increasing tensions between the different ethnic groups within this ‘patchwork’ country. These are being stirred up by nationalist elements within the Croatian, Serbian and Muslim groups, and are the principal reason for the repeated stalling of the reform process. But the start of the association negotiations could well marginalise nationalists.

It is also unclear how the EU wishes to monitor the reform process in the future. Weizsäcker and the International Commission on the Balkans advocate replacing the international power of attorney with one by the EU, claiming that Bosnia-Herzegovina can no longer be administered as a protectorate of the UN. Paddy Ashdown, the outgoing High Representative of Bosnia-Herzegovina, goes a step further, believing as he does that it “is time to begin delegating political responsibility step by step to national institutions”. This is in the financial interests of the EU given that, according to estimates by the French security expert Francois Heisbourg, keeping the peace in the region costs the EU 2 billion euros per annum.