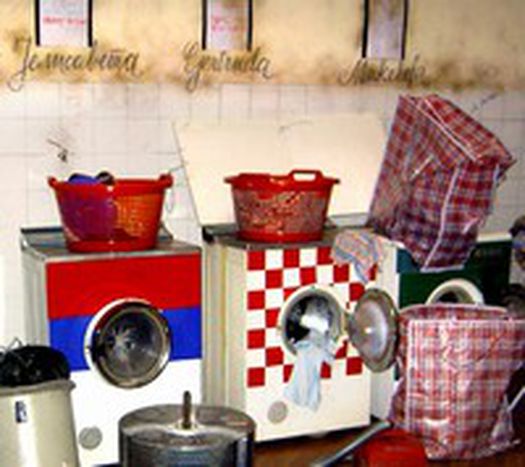 In light of the crisis surrounding the constitution in Europe, the accession of the Balkan state has been put on the back burner. However, the prospect of joining the EU is crucial when it comes to ensuring long-lasting stability for the country.

In the living room of Neno and Duda, somewhere in Bosnia, washing is being done. Stained shirts and trousers are heaped in piles between the sofa and the row of kitchen fittings along one wall. They are both war refugees. Like many others 10 years after the war, they have not returned to their home town. And, like many others, they no longer seriously entertain the idea of doing so. Especially since Neno recently came up with a promising business idea: the “ethnically correct” launderette.

Since then, three washing machines have stood side-by-side against their living room wall – one for each of the main ethnic groups in Bosnia. Mukelefa, a Muslim, runs the green machine. Every day, Jelisaveta, a Bosnian Serb, tips washing into the machine that is painted in the national Serb colours of blue, red and white. And Gertruda, a Bosnian Croat, puts dirty blouses and bras in the machine covered with the white and red of Croatia. “What a crazy country”, mutters Fabian, shaking his head. He is a foreigner and sometimes puts his washing in one machine, sometimes in another.

But Neno and Duda’s living room laundrette is actually a studio background: Gertruda, Jelisaveta and Mukelefa do their washing at prime-time on the Alternativna Televizija (ATV) channel in the soap “Praonica” (The Launderette). Three women, three ethnicities, three lots of washing. “The people in Bosnia are very similar”, says Dragana Banjac, the head of production at ATV, explaining the idea behind Praonica. “They have the same fears and the same dreams. But they still place a lot of emphasis on the dividing lines between the ethnic groups.”

ATV, which was set up in 1997 with the help of foreign donations, has since made a name for itself across the country and now mainly finances itself through advertising. This in spite of, or maybe even because of, the fact that the broadcaster aims to report objectively. “We are not afraid to refer to problems by their names”, says Dragana Banjac, who whirls through the channel’s headquarters, an old shed in Banja Luka, with his short hair and trouser suit.

The prospect of the EU

Problems – there are still plenty of those in Bosnia-Herzegovina. Although the Dayton Peace Treaty ended the war nearly 10 years ago, it created a state full of contradictions: two entities, the ‘Republika Srpska’ (Serb) and the ‘Federation of Bosnia and Herzegovina’ (Croat), each with its own administrative system and countless politicians. Not forgetting the post of High Representative, who has the power to overturn democratically legitimate politicians and laws if they are disreputable or if the High Representative feels that they are. Within the country, unemployment is at an estimated 40% and constantly rising. As before, the main employers are international organisations. Despite this, politicians, no matter what their ideological and ethnical leanings, are all convinced of one thing: the country will be capable of acceding to the European Union by 2009.

The EU, however, is rather sceptical. A major prerequisite for the opening of accession negotiations is the reform of the police in Bosnia. Something that the parliament in the Republika Srpska has recently spoken out against, declaring that the 16 different police associations in the country are to remain. And with the French and Dutch voting No to the European constitution, accession negotiations seem an even longer way off.

A black hole on the edge of Europe?

However, the importance of offering the Balkan states the prospect of EU accession has been highlighted by the International Commission on the Balkans, a high-level think-tank made up of experts and statesmen. The Commission has strongly warned against creating a “black hole on the edge of Europe”. The region may be out of the headlines now, according to the Commission, but, as before, the political situation could turn explosive at any minute. In its current report, the Commission declares that the people in the Balkan states need encouragement from Europe and need to be certain that they could accede to the EU with reform and reconciliation, preferably in the symbolic year of 2014, exactly 100 years after the start of the First World War. This prospect is of vital importance to young people. “Here we are, living in the centre of Europe, and yet we do not belong to it”, complains Michael, a 24-year-old student of medicine from Banja Luka. ”We’re not even part of the Erasmus programme.”