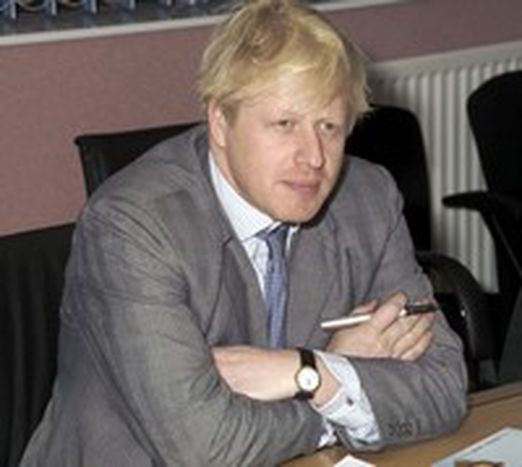 British star politician Boris Johnson has just written a book on why the Roman Empire worked so well, and the EU doesn’t. He speaks about the superiority of European civilisation, the need for Latin lessons and noxious Roman fish sauce

A white marble bust stares at me in a small office, opposite the Houses of Parliament in London. Then, the door swings open and he storms in. Meet Boris Johnson, British politician, columnist, journalist, TV presenter and true celebrity, equally loved and loathed for his eccentric wit and trademark hairdo. Formerly editor of The Spectator, one of Britain’s most influential political magazines, he returned to active politics last year and is now the Shadow Minister for Higher Education for the Conservatives, Britain’s second biggest political party.

“I simply got obsessed with it and decided to go and crack it out,” he says, now sitting on one of the room’s green armchairs. Mr Johnson’s obsession is the Roman Empire, and The Dream of Rome is, all at once, a vivid and amusing history of it, a contrasting exercise with today’s EU, and a battle cry to learn the Classics again.

Rome: the most successful brand ever?

“European powers have always looked back into history and tried to find something that validates their status as the great power of Europe,” says Mr Johnson. “They see Rome and they see ways in which they are like the Romans. It’s a way of confirming your primacy.” And today, he thinks, it’s the EU that looks into this ‘mirror of Rome’. The founding fathers, he says, have probably chosen Rome to sign the treaty for its symbolic universality: “It was a way of harking back to the achievements in creating this enormous unified space – with a single mind, a single will, a single system of government – that lasted for 600 years.”

So how did Rome pull it off? Minimal regulations and a tiny bureaucracy, says Mr Johnson, and most of all, the cult of the emperor, that everyone was happy to buy into. Unlike in today’s EU, in the Roman Empire people wanted to be Romans more than anything. Take garum, he says, Rome’s very own fish sauce. ”The stuff was deeply disgusting, almost radioactive. I couldn’t believe it: they ripped out fish guts and fermented them, and so on. The point is that in spite of its evident toxicity, everybody in the Empire ate it.”

Ironically, it wasn’t the success of the Empire that got Mr Johnson to write the book, but the resistance to it. How similar, he wondered, was Romano-scepticism to current day Euro-scepticism. I put to him that he’s known for his Euro-scepticism, too, but he protests vehemently: “I’m not really. I’m fascinated by Europe. I’m fascinated how these countries are so different, have different interests, and are so mutually antagonistic,” he says. “But realistically, the attempt to create, as Jean Monet said, people who are ‘in mind European’ is not a runner anymore. I believe people want to be different.”

Then, he strikes out. “I do assert, in a chauvinistic way…” He pauses, almost visibly collecting the right words, “I do assert, in a sort of Berlusconi-esque way, the superiority of Western, liberal, Judeo-Christian civilisation to everything else in the world.” BANG. He thinks again, then nods convinced and reassuringly: “Yes, I do. I travelled all over the world and I feel qualified to say that, for me, European civilisation is the highest.”

On European unity, Mr Johnson has his very own idea. “The best thing we could do, if we really wanted to make it happen, is to teach everybody Latin again, to insist that every child in the community has a common cultural inheritance.” This is Boris Johnson home terrain; Latin and the Classics are his heart-felt passion, and all of a sudden he starts citing from Aeneid, the Latin book he wants all European children to read – and shamelessly ignores me and my next question for what seems an eternity.

Finally realising my concern – what would the iPod generation make of it? – he rumbles, in an almost screaming fashion, hands over head: “I don’t care what they make of it, the little prats! When I was a nipper, no one asked me what I made of it! We weren’t asked, we were made to learn it. They should jolly-well learn it, for the good of their souls.” He smiles warmly, very pleased, then adds: “It would make a huge difference,” stretching the ‘u’ sheer endlessly.

Will we ever get back that “childhood bliss”?

The Dream of Rome ends asserting that, if history was anything to go by, we will never stop trying to reproduce the Empire. “If you grew up in Europe, you grew up with that memory of Rome. You had this idea that there was that pre-existing unity. It’s like a memory of childhood bliss, which the elderly continent struggles ever afterwards to recapture,” says Mr Johnson – and he is certain that we will never succeed.

But what about the EU, that real-life attempt towards greater unity? “I’d say wider, looser, nicer. Forget about Common Foreign Policy, forget about the Common Agricultural Policy. Do things that give people practical tools for living and working in, and benefiting from, the European Union. That’s what it should do.” He glances around the room, thinking about examples, then, all of a sudden, explodes: “Plugs! This European Union thing is running for 60 years and I still can’t plug in my toaster when I arrive in Brussels.”

Plugs, of course, are yet another problem the Romans – our lucky ancestors, who so effectively achieved what we are so painfully struggling with – didn’t have to bother with. Perhaps, things simply got too complicated?

The Dream of Rome, by Boris Johnson