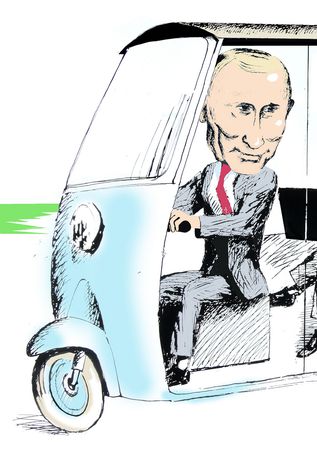 He has an impressive approval rating of 61%, yet life for Putin isn’t all rosy. The favourite for presidential elections in March 2012 experienced his first ever public ‘booing’ on 20 November. Is there a first time for everything, or was that just someone clamouring to be let out to the loo?

The fight has been won, one athlete stands victorious and the crowd awaits the arrival of the great leader in the arena. A small yet commanding figure, he stands before the people to speak. A reverent silence falls. However as he utters his first sentence another sound starts to drown him out. It starts first in one corner. The figure is startled but regains his composure and raises his voice over the noise yet soon it is spreading throughout the auditorium. Could it be that his public is daring to boo him?

This is not a scene from the ancient colosseum. This is Moscow on 20 November 2011: the leader is Vladimir Putin and he is about to receive his first public heckling by a predominantly Russian audience. To add insult to injury, he is at the martial arts match to praise the sport in which he himself has a great deal of prowess. Is Russia finally daring to speak up against a politician whose critics have often met an unpleasant end?

That is what the opposition press in Russia and newswires elsewhere in the world would like to suggest. The incident has been touted by many as a critical turning point in the support of Putin and his party, United Russia. Russian blogger Alexei Navalny, one of the blogosphere’s most prominent anti-Kremlin voices, said that the booing heralded the ‘end of an era’ and was of great significance because it was now known to ‘everyone in the country, from young to old’. Indeed, the uncensored youtube clip of the heckling went viral, attracting 500, 000 views by the following morning and propelling ‘Putin gets booed’ to the top of the most-searched list on Russian search engine yandex. In recent months the internet with the anonymity and freedom from censorship which it offers has been a popular platform for criticism of the kremlin. However, the heckling at the fight is the most direct attack yet to be made on Putin by his critics.

Meanwhile, the attempts by Putin’s supporters to explain the booing ranged from the deluded to the daft. While some claimed that the audience was in fact booing the defeated American fighter Jeff Monson, one prominent spokesperson for pro-kremlin youth group nashi wrote on her livejournal page that people were clamouring to be let out to the toilet. On Russian television, the booing was edited out of televised clips. Such blatant denial is not dissimilar to the efforts of the emperor Tiberius’ close friend Sejanus to ensure that word of his people’s dissent did not reach the ears of the ageing tyrant. While Russia’s story won’t have the same sticky end as that from ancient Rome (Sejanus was finally arrested, executed and his body unceremoniously dumped down a flight of stairs), there is nevertheless a valuable history lesson in it: the voice of the people is not to be ignored.