'We don't care who, but the commission needs a new president in 2009'. Members of the 'Anyone But Barroso' campaign are none too keen on the current chief of the EU commission. Can it influence the European elections in June? Latest titbit of news from Brussels 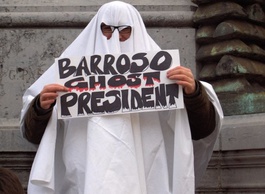 Launched by three European bloggers, the movement now has a Facebook group boasting over 700 members. Founders claim that European commission president José Manuel Barroso has no positive agenda for the EU, and that potential presidents should be nominated by all EU political parties and not simply reappointed, as Barroso looks set to be in June 2009. The group suggest a number of alternative candidates, including the former Belgian prime minister Guy Verhofstadt and UK foreign secretary David Miliband, who the campaign describes as 'bright, young and dynamic.'