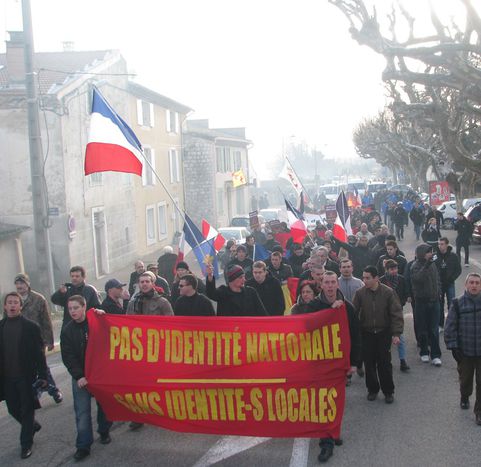 You couldn't miss them during the regional elections in France between 14 and 21 March. Not that the far-right party, which proclaims to defend the civilisation of 'true Europeans', shone at the voting booths. Other extreme-right parties have now taken up the same anti-islamic mantra

'They overcame immigration to live in reservations.' Strange though the comparison may seem, Bloc Identitaire (BI) members liken their struggle to that of the American Indians at the time of the conquest of the west. Founded in 2003, the far-right movement's battle is to save their regional, national and European identity. For Fabrice Robert, former member of the legally dissolved Unité Radicale party and president of an organisation which uses a black wild boar as its logo, 'identity is above all what differentiates people from one another.'

'Identity is what differentiates people from one another'

For more precision, please refer to General de Gaulle's 1959 definition: 'We are above all a European people of white race, descended from Greek and Latin culture and of the Christian religion.' It's a positioning that once more implies the rejection of those who do not share this 'common heritage', explains André-Yves Beck, a spokesperson for Jacques Bompard, mayor of the city of Orange in the Provence region and the leader of the league of the south ('Ligue du Sud') party. The party won 2.69% of the votes in the regional elections in the Provence-Alpes-Côte d'Azur or 'PACA' region in the south east of France. 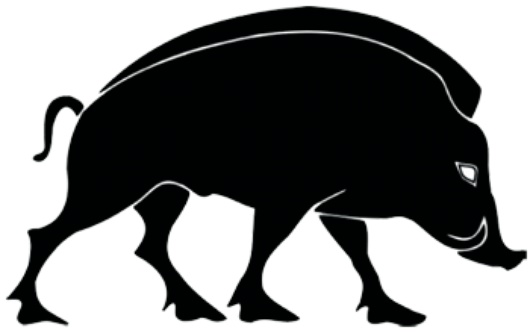 The elections were an important issue for the identitarians. 'The objective is to set up a local network of elected officials to implant our political power the way it's been done by the Lega Nord (Italy's northern league),' says Fabrice Robert. Even though the electoral results were still unofficial at the time of writing, the organisation had gained considerable attention via their multiple media campaigns. On 1 March, they misappropriated the call for a day without immigrants with a shocking slogan: '24 hours without them - why not all year!' ('24 heures sans eux, pourquoi pas toute l’année!')

The fear of islamisation and of cultural mixing, which were central to the campaign, are two of the themes that have mostly been taken up by other far-right parties, France's front national (FN) included. The party gained 18% over 12 regions in the elections. At the same time these 'natives' who have a 'true European heritage' also denounce veteran leader Jean-Marie Le Pen's attitude: there's too much compromise when it comes to immigration-related issues from the 81-year-old, they say. 'The five pillars of islam are incompatible with the French way of life,' says André-Yves Beck laconically. They see the arrival of an extra-European and Maghreb culture as an imposed fatality. The activists thus mobilise to defend the supremacy of 'white males'; take events in October 2009, when it was discovered that the recruitment policy of the Areva company was precisely against white males. The protest slogan during that time was 'us [white males] before them' ('Les nôtres avant les autres').

Jean Yves Camus, a political scientist at the French institute for international and strategic relations (IRIS), analyses this discourse from a 'culturally racist' perspective. This discourse had the opportunity to develop in an uncertain Europe, which was sick from an economic point of view, terrified by globalisation and the decline of Europe as a central power that it could provoke in the future (or that it has perhaps already been causing for a long time?). For BI members, Europe is a civilisation above all, a common history. However, they reject the technocratic construction of the European Union and wish for a federal Europe, composed of the historic nations and provinces. To aid their project, the different European movements are planning to create a school of identity leaders (an initiative supported by Bloc Identitaire, the Lega Nord and the Flemish Vlaams Belang or 'Flemish interest' party). 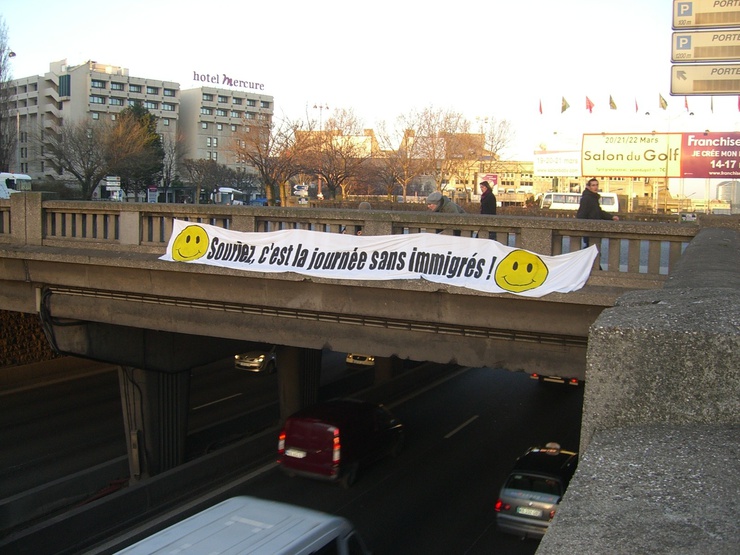 In France, the BI is still in its structuring phase. Composed of the old representatives of FN, Bruno Mégret's national republic movement (MNR) or Philippe de Villiers' movement for France (MPF), the voices of the BI are mostly trying to strip off their old labels, even if it means burning political bridges along the way. 'Neither on the right, nor on the left,' states Richard Roudier, the candidate for the patriotic ligue du midi (0.71%) party in the southern Languedoc-Roussillon region. The party is ecologist, regionalist and anti-capitalist by turns. 'We're fighting to avoid becoming homo œconomicus,' roars Françoise, a militant naturopath from the ligue du midi. At the same time, the revolutionary struggle against the giants of the agriculture industry becomes secondary with the 'danger of uniformity'. On 8 March they met up at the Quick fast food joint in de Villeurbanne in the Rhône-Alpes region to express their anger against the halal menus and strike the anti-muslim chord. 'The state is no longer fulfilling its role to protect the citizens,' condemns Bruno Vendoire, head of communication at the Bloc Identitaire. 'We are not content with talking the talk. We walk the walk.' 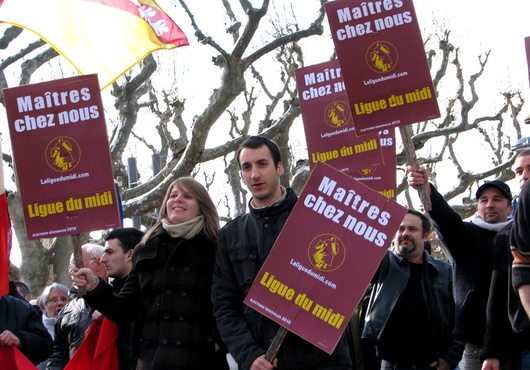 On the ground, 'the French who are proud of their roots' organise citizen patrols in the TERs (local trains), high schools and even the city centres. 'We have to make them realize that this is our home,' exclaims François, a 19-year-old student activist in Montpellier who is convinced by the political discourse of putting your beliefs into action. Youth are a priority target for the Bloc, who hope to hook the bait via the web, especially though its blog, and social networks like twitter or facebook. The candidates have also invested in a state-of-the-art tool, which is the Novopress far-right news agency. This Google mega-referenced media aggregate publishes about fifteen news stories daily that contribute to what they call the 're-information' for citizens.

'Young people are the first to be confronted with the reality of delinquency with bullying and violence in schools,' says Philippe Vardon, co-founder of the Bloc Identitaire and the president of the regional league NissaRebela. In his role as the political candidate for Nice Vardon uses a radical discourse and diplospeak. They're usually ideas which the singer of French 'identity rock' band Fraction has had to pay high sums for – literally. In October 2008, when he was president of 'Youth Identity' (Jeunesses Identitaires, JI), the 29-year-old was sued by two French NGOs, Movement Against Racism and for Friendship between Peoples (Mouvement contre le racisme et pour l'amitié entre les peuples, MRAP) and SOS Racism, as well as by famed prosecutor Eric de Montgolfier. He was fined 10, 000 euros in a court of appeal in Aix-en-Provence for reviving a previously dissolved party, the Unité Radicale (dissolved in 2002), in the new guise of NissaRebela. He was also fined 16, 000 euros for distributing a pamphlet entitled 'No veil, no rape' ('Ni Voilée! ni violée!') in the neighbouring vicinity of a school. For this he received another suspended four-month sentence. Provocations clearly play on legal margins, but succeed in making their ideology the centre of the debate.