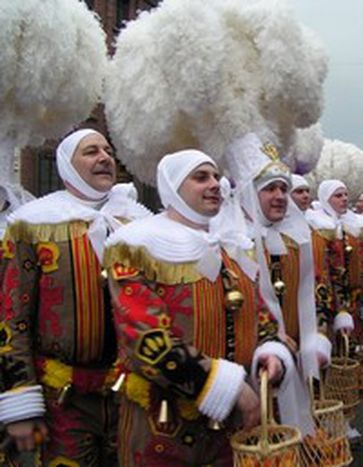 Binche: from the conquistadores to the ‘Gilles’

Binche Carnival is a festival of sound and colour and an integral part of Walloon tradition. Since 2003 it has even been classified by UNESCO as a piece of world heritage

The 16th Century Spanish court liked to say that “there is no more magnificent festival than that of Binche”. Binche? This little town in Wallonia, about 60 kms (nearly 40 miles) from Brussels, has hosted Belgium’s most famous carnival for several centuries. The celebration is said to date back to 1549, when Mary of Hungary, Mayoress of Binche at the time, was anxious to impress her brother Charles V and his son Phillip II of Spain and so arranged for seven days of dances, banquets, military parades and firework displays to be held. As this also coincided with the return of Hispanic explorers who had discovered the Americas, the Iberian courtiers accompanying the Princes are said to have dressed up as Incas, as a reminder of the conquistadores’ recent victories. The Belgian crowd were apparently so captivated by the splendour of these colourful costumes that they continued the tradition.

Once upon a time there lived a Gille

The ‘Gille’ (the name refers to the popular 16th century Spanish first name ‘Gil’), is the traditional and central character of the carnival. He celebrates the return of spring. His characteristic features are a particular dance, a brightly coloured costume and an impressive ostrich-feather hat. Each decorative detail of his costume- the lion of Belgium, heraldry, crowns or stars- has a symbolic meaning. The national colours of black, yellow and red dominate. Certain parts of the costume may require dozens of metres of material- up to 150 metres of ribbon may be needed to make the ruff for example. The Gille also wears an ‘apertintaille’- a belt of 7 to 9 bells worn around the waist, as well as a smaller bell on his shirt front. Each Gille is bound to respect certain customs. He must come from Binche, and must not sit down in public, ever get drunk or go anywhere without being accompanied by (at the very least) a drummer … as you might guess they are not difficult to spot.

There are two parts to the festivities: the carnival and the pre-carnivalesque performances, also called the ‘soumonces’. The carnival starts 49 days before Easter, the soumonces six weeks prior to that. On the fifth and sixth Sunday before the carnival groups of Gilles and carnival societies met in the early evening and (although not in costume) go out into the streets of Binche to the sound of the drums. On Shrove Sunday, the first of three days of Mardi Gras, the Gilles, and others in peasant, Harlequin and Pierrot costumes, parade through the streets of Binche and dance to music played by brass bands, showing off their dazzling costumes. Every night the town’s central square is lit up by a firework display and the crowds throw confetti into the air, filling the streets with colour. The festival reaches its climax on Shrove Tuesday, the only day when the Gilles wear their famous hats. Weighing three kilos and consisting of nearly 300 ostrich feathers, these hats are a reminder of Inca headdresses. Each Gille also hides beneath a wax mask. These masks symbolise equality and can only be sold or worn in Binche as they are carefully protected by the European Patent Office. Everything kicks off at about four in the morning with the ‘collection’ of participants. To the sound of a reed pipe playing a traditional tune the Gilles go from house to house collecting all the members of their particular Gille group. They are welcomed into each home with a glass of champagne. Next, nearly a thousand Gilles proceed to the station where they meet for a champagne and oyster breakfast. From there they carry on to a long parade where they give out (or sometimes throw) oranges to the crowd. As evening draws in everyone meets to dance around a huge carnival bonfire. The party carries on all night but the drums fall silent as the sun rises on Ash Wednesday, signalling the beginning of Lent.

Binche Carnival will take place on the 26th, 27th and 28th of February