Bike traffic: return of the scorchers

China. A single, hesitant cyclist tries to cross a chaotically busy street. In time, more and more turn up, until eventually they reach ‘critical mass’. Who needs road signs? They just wait until sufficiently more cyclists are pushed into them. Thus they sit themselves down in protest, blocking the way of cars and lorries, without causing conflicts or accidents.

That’s how one scene goes in American producer Ted White’s 1992 environmental film about cyclists, Return of the Scorcher, where cyclists become the dominant majority in the traffic. It inspired a worldwide bicycle movement, described as a ‘critical mass’ in a direct enactment of the film. Since then, the cyclists meet regularly to ride together in the biggest cities in the world, having started off in San Francisco in the United States. 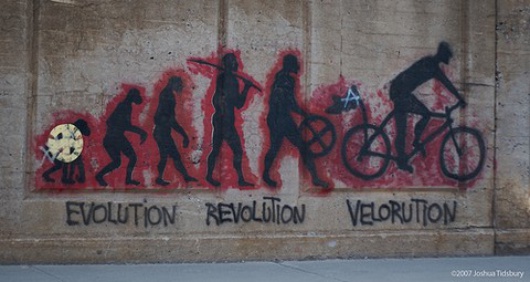 The movement has also become popular in Europe, having found hangers-on in its largest cities. There is no organiser or structured association. Collective bike journeys take place when a member calls for one, and if enough people show up. Appeals are made via flyers, word of mouth and of course over the internet. The ‘critical mass’ certainly do not see themselves as public protestors, a fact noted on the internet site of the movement in Berlin: We are not an organised protest. We are traffic! Partakers in ‘critical mass’ come together for their own sake, with no political aim and no ‘one cause.’ The cyclists are not registered, so everyone has to adhere strictly to the rules of the road; everyone is responsible for themselves.

That differentiates the ‘critical mass’ cyclists from other biker-gatherings – how, for example, the bike rallies are organised by the cycling lobby group Allgemeine Deutsche Fahrrad Club Berlin (ADFC). The ADFC describe the annual rally on ‘Strasse des 17. Juni’ (‘17th June Street‘) as a ‘protest’, like the 250, 000 people from all over Europe who took part in June 2007’s World Environment Day event against climate change and damage to the environment. The bike as a safer method of transport and as an exercise tool were other themes of the protest.

The vélorution movement in France relies on the ‘critical mass’, but has a strong regional political façade. In the ‘Paris Appeal’, the ‘velorutionnaires’ above all demand the a href="http://www.velorution.org/appel/" class="external-link">getting rid of the car. The whole city is directed towards motorists, cars are denounced as the main cause of noise, dirt, stress and accidents and also ecological and visual environmental pollution. In the ‘Appeal’, the activists prove that the trouble makers are the cars that can carry five people but on average only transport one or two people – quite different to the bike. Amongst other things, the ‘velorutionnaires’ demand greener methods in the city’s districts, like generous paths for skaters, bikers, pedestrians and other non-motorised types of transport. They argue politically with the spokespeople of the city council and also demonstrate against concrete building projects.

Although one is less politicised than the other, they all unify to campaign together for the rights of cyclists and against cars taking over, above all, city life. The activists have a vision of a new urbanity in which the bike is ecologically and visually central. The movements are also alike in the way that they both want to claim back the roads for communal use: a colourful relocation of hooting and jingly bikes, adorned with banners, against the misery of smelly cars.

The first bike protest took place in Hannover in May 2007