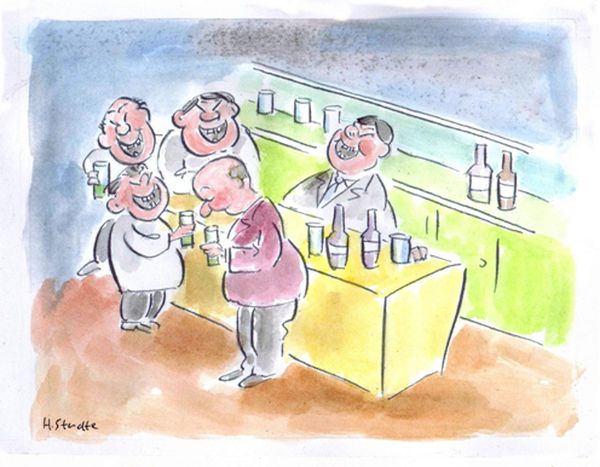 Between blushes and bloody marys

Imagine the scene, you’re in karaoke bar surrounded by your Japanese co-workers, you’ve just sang The Beatles, so you decide to make a toast in typically British fashion. Your “chin chin old chap” results in gasps, snickers and raucous guffaws. In the English speaking world toasting with a jolly ‘chin chin’ casts you in the role of a very particular old world Brit: imperial, posh and merrily drunk. Use this phrase in the land of the rising sun and your meaning will most definitely be lost in translation: ‘chin chin’ being the childish word young Japanese boys use for their…ahem…

Funnily enough, the origins of this expression lie far from the shores of Blightey. Also used in French ‘tchin tchin’, the phrase came to Europe from China. In the 18th century, “ts’ingts’ing”, which meant ‘salutations’, was often heard in the pigeon English of Chinese ports. English merchants, among their many other wares, brought the expression back home and into popular usage. It was during their long journey home and thanks to many raised glasses that the expression morphed into the more familiar ‘chin chin’.