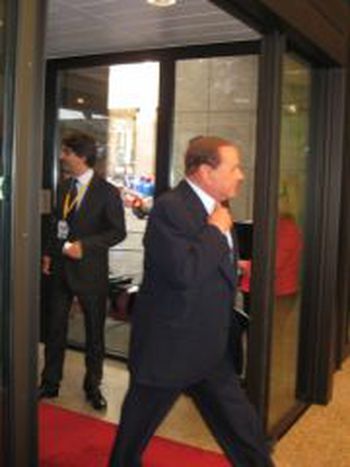 By Eva Donelli An official press conference has been finally given today by the Italian Prime Minister at the end of the EU Summit in Brussels. An exceptional event, considered that the Italian Cavaliere normally rushes away after the Council meetings and only rarely accords journalists a few declarations while heading towards the Council’s exit.

Over the 30 minute discussion, topics covered included Mario Draghi’s appointment at the ECB, the Greek opposition leader’s position on the austerity measures and the crisis in Libya.

Following Mario Draghi’s appointment by the European leaders as new President of the European Central Bank, the attention of Italian journalists was drawn to the Berlusconi’s unofficial confirmation of Lorenzo Bini Smaghi as the favoured candidate to take the newly appointed President’s place at the head of the National Bank of Italy. In fact Lorenzo Bini Smaghi, described by the Prime Minister as a valuable candidate, informed French President Sarkozy of his intention to quit his position at the ECB by the end of this year.

On the Greek crisis, Mr Berlusconi underlined how, along with 17 other EU ministers, he has been trying to persuade the Greek opposition leader Antonis Samaras to accept the austerity measures which are to be voted on next week. At the pre-summit gathering of the centre-right European Peoples’ Party yesterday, Mr. Samaras reaffirmed his position on the measures, declaring that “Although I support reform efforts, I can’t back the package proposed by the ruling Socialist government.”

Questioned whether Italy is at risk of falling into a similar economic crisis, the Prime Minister said, “the situation in Italy can’t be compared with the one in Greece, being that the Italian banking system is very solid, the banks strongly capitalized and we are exporting more than we are importing."

Regarding Libya, Berlusconi highlighted the fact that the EU is financially supporting the Transitional National Council in Libya, and following yesterday’s announcement that the NATO mission will be extended by 90 days, Berlusconi stressed, “many supporters are abandoning Gaddafi, who is finding himself more and more alone, and this gives hope to the coalition of a possible political mediation with the Libyan dictator.”