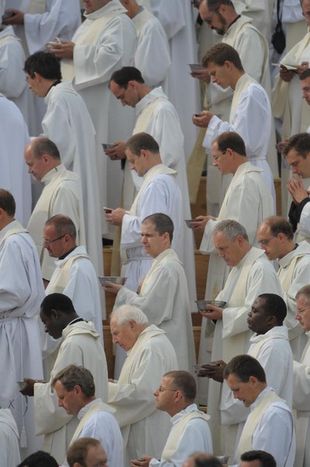 The catholic church is in trouble. On the one hand the raging controversies with other religions and the non-religious world have been reduced to a minimum. On the other hand however there is a fraction in the Pope's internal world

It isn't just the fact that Pope Benedict XVI wrote a letter to Italian newspaper Corriera della Sera in November 2008 stating that 'an inter-religious debate in the strict sense of the word is not possible.' He is also defined by many parties as a 'conservative' Pope if not 'reactionary'. Joseph Alois Ratzinger, 81, appears fascinated and attracted to the medieval church, which was primarily founded on its dogma, but also on temporal power.

Ancient rites on an internal front 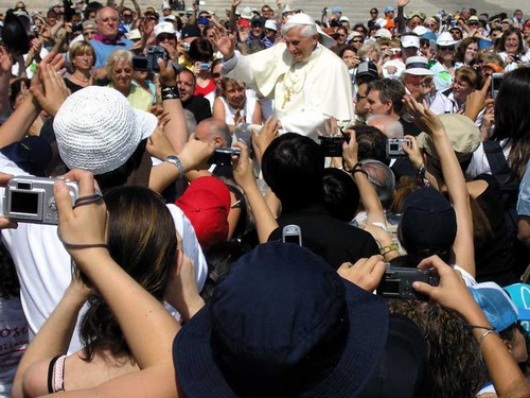 There is not a chance for example that the Pope's attention to the pomp and splendour of the correct vestments is unusual. For the christmas mass of 2008, the Pope 'had a cloak with a wing span of 7-8 metres, a mitre with gems and diamonds, a pallium (a narrow band with loop in the shoulders) with gold pins, casula (literally ‘little house’, perhaps inspired by the fact it is a large cloak), finished with a gold trim, an embroidered shirt, gold ring and shoes in sparkling colours,' according to the report by Matteo Ragazzo.

Ragazzo is the young parish priest from the region of Padua who denounced the idea of a return to sobriety for the catholic church. The backward looking ideas manifest themselves in the return to Latin and the Messa tridentina (mass with the Roman rites which was celebrated until 1962 - ed), communion on bent knees and the return of prayers on Good Friday for the conversion of Jews (recently modified following the controversy of the events involving Bishop Williamson). In 2000, Cardinal Ratzinger closed the door on ecumenicalism with the document Dominus Iesus ('Lord Jesus'), which reaffirmed the role of the church in Rome. It also prepared everyone for the welcoming of a discussion on the presupposition of a dogmatic truth which could not be discussed. Nor did it allow any concessions to be made. When imagining a hypothetical papacy, it is easy to guess the anti-thetical direction which the unsmiling yet charismatic Jesuit, Cardinal Jorge Mario Bergoglio would have taken (Bergoglio was probably the second most voted Cardinal in the conclave which elected Ratzinger).

Rehabillitate the Holocaust denier of the church

The outward impression of the church does not appear any less conflicting. In 1969, Ratzinger was a lecturer in dogmatic theology and the history of dogma at the University of Regensburg. But in 2006, when he comes back for a lectio magistralis, he quotes a text by the Byzantine emperor, Manuel II Palaiologos. One passage he reads in particular (Show me just what Mohammed brought that was new, and there you will find things only evil and inhuman) triggers protests from many islamic communities and reprisals against catholic missionaries.

In 2009, Regensburg is yet again ensconced in controversy. It is in the vicinity of the Bavarian city (at the seminar of the Pius Fraternity in Zaitzkofen) that the dissident British Bishop Richard Williamson gives an interview the week before Holocaust memorial day (27 January). He is just being rehabillitated after a complete excommunication. In a Swedish television broadcast, Williamson maintains that no Jews were killed in gas chambers. The short speech, produced in November 2008 by Channel Svt, is aired the same day as the revocation of his excommunication. It also signals the lowest point in relations between the vatican and the jewish community. This, at least since 1974, the year in which Monsignor Hilarion Capucci (who in 2002 still continued to give speeches in favour of the pro-Palestinian manifestation 'intifada until victory'), was arrested at the Israeli-Palestinian border. He was sentenced to twelve years in prison for arms smuggling from Lebanon to Palestine. The Greek catholic leader of Jerusalem was liberated in 1977 after pressure from Pope Paul VI. He was only noticed again on 5 February 2009, on board an aid ship which violated the maritime blockade imposed on the Gaza Strip by the Israelis.

A 1990 quotation by Ratzinger about Galileo came to light recently and didn't help relations between the church and the non-religious world. University protests led to the Pope cancelling a visit to the Sapienza university of Rome on 16 January 2008, for the inauguration of the academic year. The Pope revived a discussion of the assertion made by Austrian philosopher Paul Feyerabend in Against Method (Feltrinelli, 1979). He stated that 'at the time of Galileo, the church remained more than faithful to his ideas. The process against Galileo was reasonable and just.'

Ratzinger has done more than just wake up people's faith. He has assumed an important role on the international scene

But the non-religious world is annoyed about the way in which the Vatican can succeed in putting pressure on political issues. Take for example euthanasia (with the controversial Eluana Englaro case in Italy), therapeutic abortion, assisted fertilisation with regards to unmarried couples, the prevention of homosexual marriages and the insistence that there is a crucifix in every school and judicial building. In conclusion, Ratzinger seems to be successful- he has done more than just wake up people's faith. He has assumed an important role on the international scene- at least as successful as his predecessor. The deference given to him by French president Nicolas Sarkozy, British former prime minister Tony Blair (who converted to catholicism in December 2007) and former US president George W Bush all show that he has regular discussions with temporal leaders.