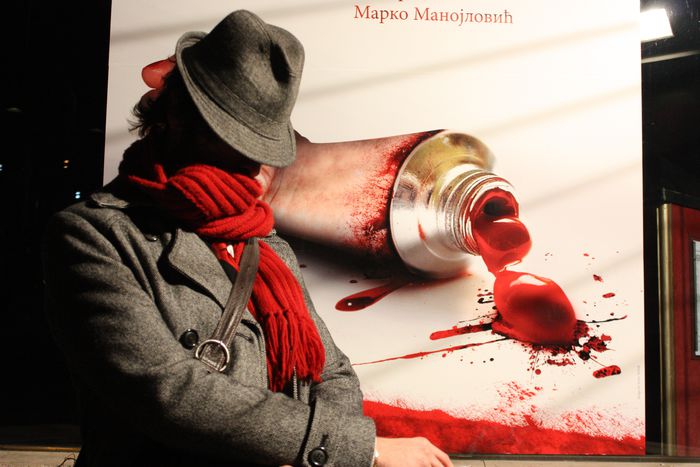 In a city where more than two-thirds of students harbour dreams of going abroad after graduating, the empty discourses of corrupt politicians can be an efficient detonator for discontent. It’s a capital whose people’s hearts are irremediable divided between Russia and the EU, where violence raids its stadiums and streets

‘I can’t wait to finish university and get out of her,’ confides archaeology student Nevena over a cafe in Belgrade. ‘It’s impossible to find a job here so there’s nothing really left to do but to pack our bags.’ No solutions from the state either. ‘We have an incapable political class which is not concerned about the future of the country,’ explains Senka, a journalism student and cafebabel.com Belgrade member. ‘Politics here is nothing more than a slogan for money and the thirst for popularity.’ I’ve just arrived in the Serbian capital. It’s a city which seems fresh and full of life despite the wounds on its skin. Those thirsty for nightlife even come from as far afield as Slovenia to drug themselves. Yet there’s a community of disappointed, unsatisfied kids who are getting their voices heard whilst politics is barraged. In the stadiums for example. 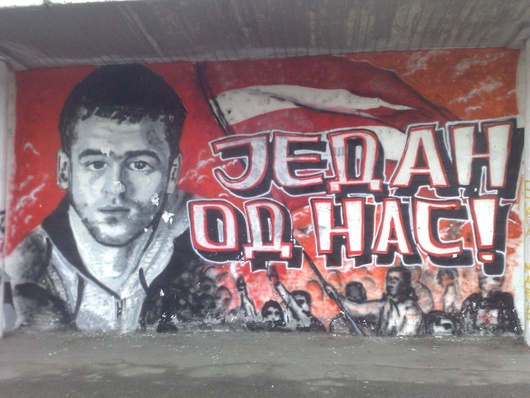 ‘Football is confused with national pride here,’ explains Aca, a journalist for the daily Blic and cafebabel.com Belgrade founder. ‘In turn, national pride gets confused with religion. In the end it all converges in politics.’ It’s true. I discover that as I walk around the Red Star stadium, named after the country’s most popular football side, who are rivaled by FK Partizan. Since 2007, Uroš Mišić has become an anti-system hero; he was sentenced to ten years in prison after attacking a policeman with a flare at the stadium. ‘Attacking the police is attacking the country, a symbol of repression and the persecution of football gans,’ explains Aca.

Extreme Red Star fans were the real spark for the confrontations which took place during the Italy-Serbia Euro 2012 qualifier on 12 October. The real motivation behind the violent behaviour wasn’t derived out of football faith, but in pure politics, even leading to an Albanian flag going up in flames. ‘The president of the Serbian football association, Tomislav Karadzic, is the real reason for all these waves of violence,’ says Marko, a football fan and pacifist who we bump into at a kiosk near Republic Square in the city centre. His t-shirt adorns an image of the president behind bars. ‘He’s corrupt,’ he adds, looking up, ‘he has to go! He used to be the president of Partizan and since he has been running the entire football league, he buys matches and Partizan are always at the top of the league. All they do is win.’ That also explains the fans’ violence at the Red Star against their national team. Trying to talk about this subject is taboo here in Belgrade: no Serbian football club supporter wants to talk about it, not even the team’s spokesman, Marko Nikolovski. I waste an afternoon in one of the bars at the stadium waiting for him, but he never turns up. 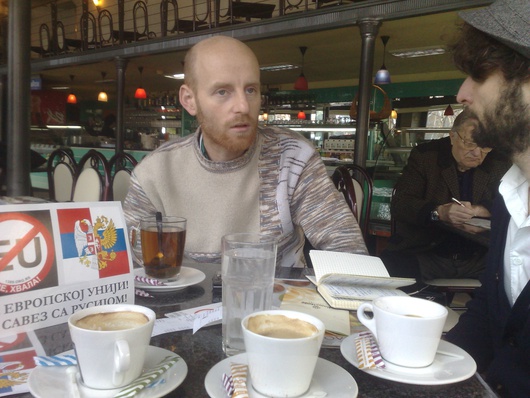 Various nationalist organisations are proliferating in Serbia because there is a need for an alternative to politics, which is considered corrupt and incapable. The ideologies of these organisations allow space for even the most fanatic of football fans room to identify with them. Radojko Ljubicic is the leader of a nationalist organisation created in 2004. 1389 takes its name from the date of the epic battle between the Serbian and Ottoman armies. ‘The difference between the political parties and us is that we put our programmes first,’ he explains at a bar in the centre of the city. ‘Political parties only make promises that they never go on to respect. They create nationalist discourses for the good of the nation and then take money from the United States and Europe before changing their game.’ The nationalists are against entering the European Union. ‘No-one has ever read the European constitution,’ Radojko continues. ‘We have. Entering the EU means accepting Nato. In other words, if one of the twenty-seven member states of the EU had to defend itself in front of Russia, we’d have to aid them. That’s inacceptable for us, just like it was to sacrifice Kosovo.’

Can Radojko offer an explanation about the gay pride violence in October 2010 ? ‘We’re not violent,’ he says. ‘It’s true that we are against gay pride because the orthodox church says that homosexuality is bad. But for example, the year before we organised a peaceful protest. The ‘holy parade’ took place from the cathedral, touring the centre before turning back.’ According to Radojko, the government has an interest in making the protests seem more violent because they represent an opposition which is in the consensus. ‘They allowed another organisation with the same name as ours to officially register themselves, but they are violent extremists and don’t have a programme. It’s a violation of the constitution. They also invented the preemptive arrest. There’s the democracy that you have in the west: I was arrested before a protest to forestall eventual trouble. That day the police intervened without reason. There were only brawls because the lads were spontaneously attacking the forces of order.’

In the end young people diffuse violence, you don't need nationalist organisations. ‘Seeing two men or two women together is not a nice image, but 90% of people in Serbia share my views. Homosexuality is against our tradition and our christianity. Young people aren’t satisfied with a corrupt system inherited from London and Washington, where the economy is the only value. A group of people don’t find work long after they’ve finished their studies. They’re unhappy and see that the politicians don’t do anything for them. They only see injustice and corruption. After a beer or three, they become aggressive.’

That night at a kafana (tavern) in the city centre, the orthodox new year is being celebrated. It’s mid-January in Belgrade, and the beer flows late into the night. In a drunken haze I am called to a toast by some of the local lads, who insist I am recorded saying the following in German: I like the Fuehrer, I like Hitler, I like the Reich. Radojko had warned me; ‘We are not violent. Everyone knows that the ideologies of those who are really violent come from the west. The fascists, the neo-nazis, the anarchists don’t come from China or Russia at all.’ In any case, I am afraid, and Aca gets me out of the bar.