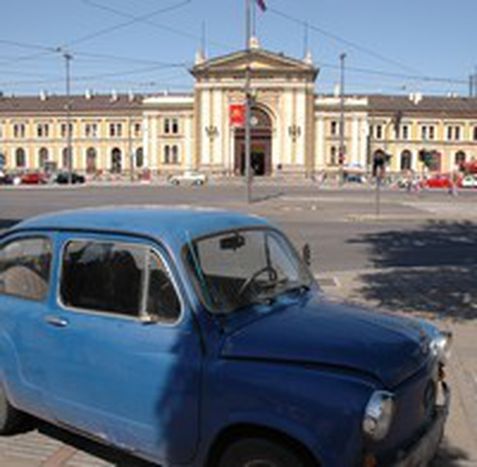 Belgrade: Barcelona of the Balkans

With its throngs of bars and canal boat clubs portrayed in an Emir Kusturica film, the Serbian capital is still the alternative tourist destination

Prepare to start writing the backpackers guidebook! Yes, believe it or not there are some places in Europe untouched by hoardes of tourists. Belgrade is one, and it has enough to leave those not keen on package holidays eager to discover this unchartered city. The former Yugoslav capital lies at the confluence of the Sava and Danube Rivers, today resonates to the rhythm of techno, blues, gypsy music and even ‘turbofolk’ (Balkan folk with techno beats) - not forgetting Serbian pop from the Eurovision 2007 competition winner Marija Serifovic. Even the best rock groups are making a stop in Serbia this summer, with the Rolling Stones scheduled to perform in Belgrade on 14 July.

In the 'Barcelona of the Balkans', the cafes are packed all hours of the day and night, as are the bars in apartments. Whether perched or underground, uncovering them becomes more like a game in this urban environment. For example at the back of a courtyard, down a set of stairs and behind a thick door you can find Ben Akibar, a bar aimed at Serbian yuppies, a former haven for opponents to the 1989 - 1997 Slobodan Miloševi regime. Or even the well-hidden bar for the 'Globetrotters Association’, it's wall decorated with souvenirs of past trips.

Silicon Valley of the Balkans

Come midnight, the bars and the road are empty within a matter of minutes; it is obviously no longer the ‘in’ place. That becomes the Plastic (still keeping with the silicon metaphor), an enormous disco club frequented by ravers and partygoers dancing away to the remixes of the best international DJs.

Its visitors will not escape hearing a small taste of the Balkan version of hit German 'Ostalgie' movie Good Bye Lenin (2003). Those nostalgic of Marshal Tito's Yugoslavia, will be able to admire places in a Socialist style in Belgrade, a collection of rusty cars without exhaust pipes that spew out masses of black fumes, the Trabants, the Yugos and other alien vehicles, symbols of the Communist era. The ‘Yugostalgics’ can also stumble upon on the marble mausoleum dedicated to Tito, and then dine at the Writers Club.

Lurking in the basement of an old residence, this former artists den still preserves an old-fashioned atmosphere of fallen intelligentsia. Wearing a pair of out-of-fashion bi-focals, the waiter holds a menu out to you written entirely in the Cyrillic alphabet, with traditional and lavish dishes on offer. It appeals solely as a means for translation - the host can decide the menu for himself.

At sunset, the old Ottoman fortress of Kalemegdan is regularly taken over by romancing couples who gaze at the sun as it sets over the Sava. Down below, barges start to come alive again to the sound of gypsy music; a new night begins in Belgrade. With it, the cities’ batch of strange places continue to charm the curious traveller.