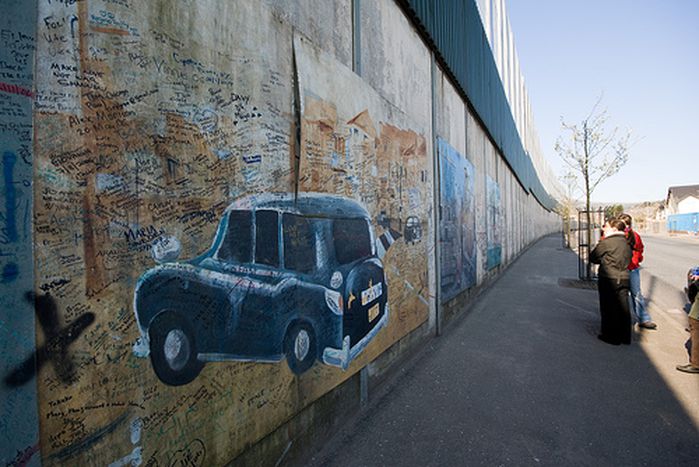 Belfast in a black taxi: Europe’s last divided city tries to overcome its past

On 6 February, the Northern Irish paramilitary organisation the INLA decommissioned their weapons, and the province took one more tentative step towards social stability. Now that the former war-zone has re-opened its doors to the world, visitors are flocking to western Europe’s last divided city. A taste of the Northern Irish experience

'Don’t worry, it’s just a precaution’ explains our taxi driver not-so-reassuringly. ‘Some of our cars were shot at not so long ago’. He produces an extra license plate from the boot of his black cab, and quickly affixes it over his own. Standard procedure, he says, in preparation to take us through Belfast’s protestant Shankill district. ‘There are locals that don’t like having catholic taxi companies drive through the area,’ he says. 'They know us from the registration’.

Black taxis, like the one we are in now, came about when buses, being potential barricades, were banned in west Belfast. Today, this half of the capital city still has no public transport. Many drivers double up as tour guides, and the black taxi experience is becoming one of the city's premier attractions. At 24 years of age, it is my first time crossing the border. 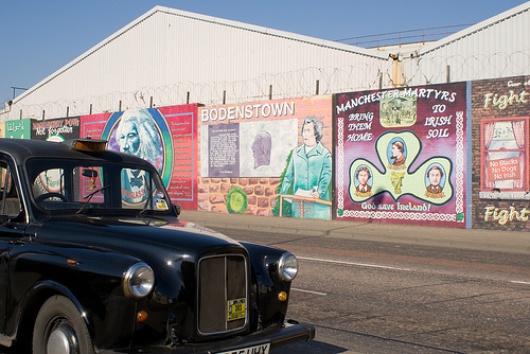 Though the north is never more than a few miles away, for many in the south it might as well be another planet. As the republic revelled in a hedonistic decade of economic explosion, becoming a magnet for hordes of European workers and tourists alike, the north remained, for many, a no-go area - left picking up the pieces after thirty years of war. 60% of the population depend on the British government for any employment at all. Now that the gunfire has ceased, its people are determined to finally start getting on with their lives. Our driver is passionate about his hometown, orating from the driver seat in his strong Belfast twang. Accompanied by a Ukranian-Swiss friend, I pretend not to speak any English; I want to leave my southern nationality out of the equation, and let him tell his story.

Northern Ireland is breathtakingly beautiful. Its mountains and lakes are celebrated in Celtic mythology - this was once the kingdom of Cú Chulainn, the Gaelic Hercules. Turbulence began when the British built colonial plantations here in the sixteenth century, as part of their planned conquest of Ireland. Thousands of English and Scottish presbyterians were sent to establish vast colonies in Ulster, displacing leagues of natives in the process. 400 years on, the province retains a unique dual-culture, imprinted on the landscape itself. After the republic’s war of independence from Britain in the 1920s, the UK retained control of the mostly protestant, industrial north, dividing the island in two. While the republic busily built up its brand new state, the north was thrown into ethnic, religious, and political conflict. In the 1960s the region’s downtrodden catholic community, inspired by the Martin Luther King movement, marched for civil rights in a society where practically all positions of power (such as the entire police force) were exclusively held by protestants. 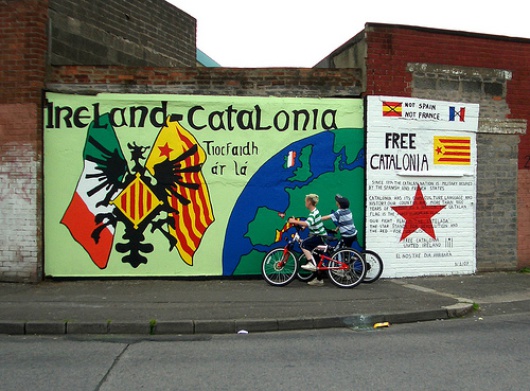 The backlash was violent, and eventually the British army was sent in to restore order - they didn’t leave for the next thirty years. A bloody conflict between the army, the IRA and various other paramilitary groups dominated life in the north up until the ‘peace process’ began in 1998. Today, the so-called ‘peace wall’ mercilessly slices the city in two; at 26 ft (7.6m) this iron structure is over twice the height the Berlin wall ever was. It can be crossed only during daylight hours; by night, residents light bonfires against the wrought iron, making it white-hot to touch - Belfast’s own wall of fire. Political murals abound, unique cultural expressions born of the frustrations and outrages of the conflict. Locals adorn countless monuments to the dead, whose murders have all too often gone unanswered. The walls of catholic districts proclaim allegiance with Catalonia, Palestine, the Basque Country; protestant streets are hung with union jacks, murals of the queen flanked by masked men with machine guns.

In French, my friend quietly says to me, ‘I didn’t know places like this still existed in Europe.’ More than once, our driver is overcome and has to stop, the atrocities he recounts, after all, took place amongst his friends, his neighbours, his peers. He is genuinely aggrieved, genuinely distraught for what has become of his town, genuinely hopeful for the future. For a personal two-hour tour, which is nothing short of thrilling, he asks only £20 (only 22 euros then) - the price of a mediocre lunch across the border in Dublin. It is getting dark back in the bombed out city centre, where new buildings are mushrooming up everywhere. Belfast is awakening from a nightmare, and its people, with their characteristic resolve, have their sights firmly set on a new day.