Being vegan in Lithuania: You can't escape Romas Zabarauskas

The Lithuanian filmmaker Romas Zabarauskas talks us through how he came to create a vegan movie, and the meat-free happiness of his team whilst shooting his last production, You Can’t Escape Lithuania.

“The carrot is THE health food #carrot.”

This was the response I received from Romas Zabarauskas to my interview request, along with this selfie, in which the Lithuanian filmmaker stands, torso bare and muscles rippling, with the aforementioned root vegetable. But what's the deal with the carrot?

The 25 year old filmmaker and activist already has several films under his belt. He spent the summer polishing the edit of his latest movie, You Can’t Escape Lithuania.  The film aims (in part) to be a self-parallel: A gay filmmaker (played by Denisas Kolomyckis), along with his Mexican lover, try to help a friend who has killed his mother flee the country.

At first, the queer road-movie lacked funding because of its subject matter: On his website it explains that the Lithuanian filmmaking centre refused his candidature at first, whilst officially recommending him to change the theme. Damn!

A crowdfunded project that bared all –  as well as coming coupled with a challenge to individuals – allowed Romas to bring his project into being. It will screen in cinemas across Europe  in 2016.

Here is where that carrot finally comes into play: When Romas himself became vegan last year, he asked whether he could also serve vegan dishes to the members of his crew. “And then I had this idea to make a whole media campaign out of it: to set a positive example and to promote veganism by challenging my film crew with the vegan diet," he explained, "The reactions were different, some people hated it and some people loved it!” 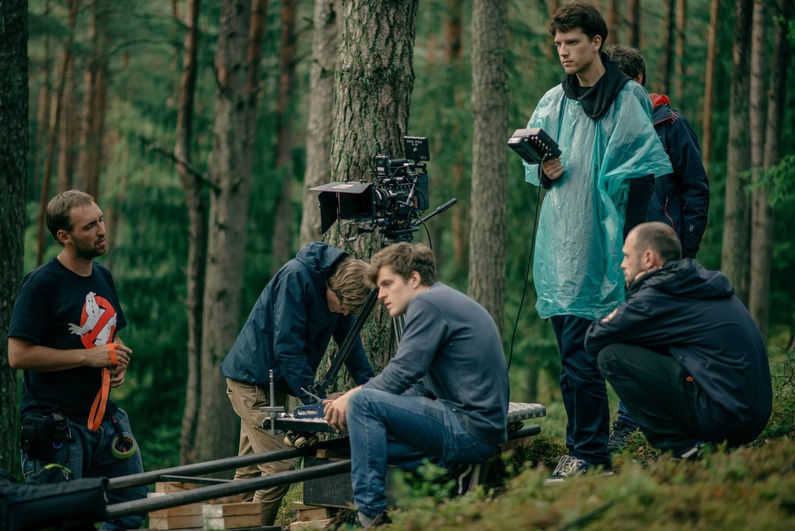 Thanks to this #veganfilmmakingchallenge – for which Romas allied himself with the Lithuanian association for the protection of animals Tušti narvai (empty cages) – an extra 3,500 euros could be raised for the indie movie.

The artistic director Giedre Valeisaite and the costume designer Virginija Valeisaite have for their part avoided leather, fur, wool and other non-vegan materials. You can’t escape Lithuania is thus “as vegan as it can get, even if the story has nothing to do with veganism." Romas also plans to "keep my film shoots vegan and veganize other work related environments. I'm also interested in seeing other opportunities to make future film shoots even more eco-friendly."

Romas Zabarauskas is also an activist in the LGBT community (he notably founded the LGBT Friendly Vilnius initiative), as well as being against racism (see his last film We Will Riot), a convinced vegan and a defender of animal rights. Busy man!

Is too much activism a bad thing? “I don't think there is such thing as 'too much activism'," he replies, "I think, though, that there is too much injustice. I don't call myself an activist at all. I think we should all be active and it's only natural.”

During the COP21 climate change conference currently taking place in Paris, Romas is above waiting for people to finally recognise that the industrial treatment of animals has an enormous influence on greenhouse gas emissions: “But I don't think it's gonna happen," he laments, "If the countries sign a legally binding agreement to limit emissions and finance clean technology in developing countries, that's already positive."

With his vegan filmmaking campaign, Romas has (ironically) killed two birds with one stone: He made his engagament with these issues public whilst at the same time financing his project. I couldn’t stop myself asking him if he will be continuing his Vegan thing after the campaign is over: “Yes, I'm vegan,” he replies, “Are you still doing the meat and eggs thing?”

Translated from Vegan in Litauen: You can't escape Romas Zabarauskas