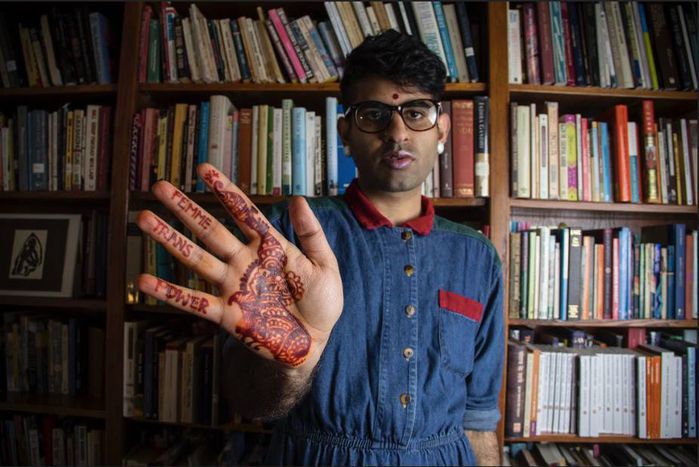 "Being a gender non-conforming person of color in the LGBTQIA community is terrifying", says Alok Vaid-Menon

Alok Vaid-Menon (they/them) is a gender non-conforming writer, entertainer, and performance artist. Last Tuesday, they came to Le Space in Brussels to present "Femme in public", a poetic performance in which they share with the audience their experience as a femme of color. Cafébabel was there to meet them...

In their performance, Alok explains that they are currently on tour not for them, but for all of us that are cisgender. For us to question our understanding of gender and race and the way we have internalized a culture that "hates people like [them]". For two hours, Alok makes their audience laugh - sometimes because they are genuinely saying something funny, sometimes as a defence mechanism because what they say makes you feel guilty - cry, and think. Cafébabel was lucky enough to ask them a few questions afterwards.

Alok: I think that we do this thing where we call caring for people, caring for the environment, and believing that no one should have to suffer, "activism". Those things shouldn't be political, they should be fundamental. I want a world where everyone has equal opportunity. I want a world where things like "gender" and "race" and "disability" aren't impediments to people's joy, safety and fulfilment. Does that make me an activist or does that make me a human being?

And yes, unfortunately we live in a world so entrenched by the gender binary that the simple act of me existing and writing already becomes politicized because voices and perspectives like mine have been forcibly silenced.

Cafébabel: Can you explain how, in your opinion, do gender and race relate?

Alok: Gender is a racial construct. There could be no thing called "gender" without this thing called "race" and vice versa. People think that race is only present when bodies of color are in the room. But the truth is that race is always present. Historically "gender", and specifically the gender binary (the notion that there are only two genders: male and female, and that these genders are inherently oppositional) was imposed by white colonial projects on indigenous people across the world. Prior to colonial intervention (and still today in many cultural contexts), people recognized the existence of multiple genders and fundamentally different ways of understanding gender. The idea that there have always only been two genders naturalizes a particular white/western/Judeo-Christian world view.

Cafébabel: In the past, you have explained that in your opinion, more trans visibility has not helped gender non-conforming people be safer. What should we do to stop anti-trans violence?

Alok: There are so many things that we could do to stop anti-trans violence today, here are only some of what is an exhaustive list:

1) Fundraise and donate to trans-led organizations and activists focusing on transgender people. Most "LGBT" organizations only focus on the needs of white cisgender people, even though trans and gender non-conforming people are experiencing the brunt of violence.

2) Hold institutions, organizations, and movements accountable for perpetuating anti-trans sentiments and violence in their own allegedly progressive work. Center the leadership of trans people in all movements, not just gender justice movements.

3) Actively work to challenge gendered thinking at all levels. The first question shouldn't be "Is the baby a boy or a girl?" but rather "Is the baby healthy?". Don't assume people's genders or pronouns without asking first. Create a culture where people can self-narrate who they are.

Cafébabel: What do you think about feminism?

Alok: That's a huge question. I don't think there is one feminism, I think that there are many feminisms. Mainstream articulations of feminism tend to just be for and by white cisgender heterosexual women, but there have been and continue to be transfeminisms, women of color feminisms, who center violence and brutality against trans and gender non-conforming people of color. These are the ones I believe in and learn from.

Cafébabel: How is it to be a gender non-conforming person of color in the LGBTQIA community?

Cafébabel: How (if at all) can cis people be allies?