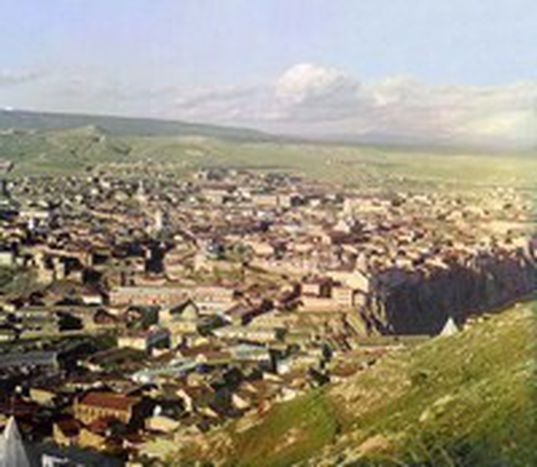 Bed of roses in Georgia?

The Georgian ‘Rose Revolution’ was well-covered by the media and created a superstar president. Two years on, what remains of those hopes brought to life in November 2003?

Mikhail Saakashvili wants to get things done. Since his accession to the Georgian presidency in January 2004, covered extensively by the media, some have been highly enthused by his muscular manoeuvres, while others have gritted their teeth. The young are amongst his biggest fans and worship their national hero to an unprecedented extent. Giorgi Meladze, one of the leaders of the student movement Kmara (Enough is Enough) stresses that his generation, patriotic in character, “is enamoured with the national flag and hymn, sung freely by some, even at family parties”.

The international community is singing much the same tune. At the United Nations forum on September 15 this year, Misha, as the president is known, was welcomed as a hero of democracy. While the expectations of the coloured revolutions in Ukraine or Kyrgyzstan fade away, the small Caucasian republic inspires confidence. A confidence reinforced by Washington a few days ago by a rather large grant of $295 million to improve the country’s infrastructure.

If the sincerity of the Saakashvili programme is undeniable, some of his measures are rather surprising. These include the arrests of journalists and military incursions into ceasefire territories. “The meaning of the Rose Revolution is greatly misunderstood in the West” says Vicken Cheterian, journalist and programme director of the CIMERA organisation. “It was presented as a pro-democratic revolution but Saakashvili’s main goal was to strengthen the Georgian State. This often works against the principles of democracy. Today, there seems to be complicity between public authorities and the media”. Thornike Gordadze, researcher at the Centre d’Etudes et de Recherches Internationales (CERI), points out that “under [ousted President] Shevardnadze the impression of greater democracy was created by the weakness of the state. It was a democracy by default."

What is more alarming, say specialists, is the weakness of the opposition parties. “In order for democracy to function, opposition parties are needed. That is the role of the opposition. At the present time there is no credible alternative to Saakashvili” states Gordadze. Two years of the anti-corruption campaign, which was the spearhead of the Saakashvili mandate, has not been enough for Georgia to improve on the scale of the most corrupt states in the world. According to Giorgi Meladze, “the reforms that have been undertaken are the result of very targeted micro-interventions. The government has adopted an ad-hoc style, where reforms are implemented case by case. There is no systematic approach towards strengthening public institutions.” The few successes achieved by Saakashvili – educational and judicial reforms and improvements in the road networks – have not covered up the disappointment in the population, as demonstrated by demonstrations supporting the ex-Foreign Minister, Salomé Zourabichvili, sacked on October 19.

Dump it on the United Nations

Regional policy also suffers from a lack of foresight. Although Saakashvili can boast of success in Ajaria, following the overthrow of its rebel leader Abashidze, the situation is much more complicated in Abkhazia and South Ossetia, de facto independent regions since the outbreak of civil wars there in 1992-1993. Now maintained under fragile control by 3,000 Russian soldiers, these two regions only have eyes for Moscow. 80% of their populations have recently acquired Russian nationality. According to Vicken Cheterian, the Georgian capital “Tbilisi no longer seeks political power in these regions but simply wants to avoid any overflow of violence from these areas.”

Furthermore, whereas the presence of Russian troops and military bases enrages Tbilisi, the international community, which is little inclined to offend powerful Russia, keeps quiet. Although George Bush does not hesitate to name Georgia a “torch of liberty in the world”, he suggests letting the “United Nations, for example” deal with the problem of the Russian troops, promising “to make one or two phone calls” to help things along!

The love story between Saakashvili and the White House has often been exaggerated, however. As Thornike Gordadze puts it, “a country like Georgia has very little choice when it comes to geopolitics. It is logical that Georgians turn spontaneously to the US, a country which invests enormously in the economy, security, culture and education”. The American ally is natural and Shevardnadze himself actively supported the US after September 11 2001, by opening his airspace and sending troops to Iraq.

Between Russia and the US, shouldn’t Georgia’s future lie with the European Union? That is what Saakashvili proclaims. For the moment, EU membership for Georgia is not even on the cards. The two entities are undergoing severe identity crises. The European delegation in Tbilisi has a “good neighbour” partnership in mind.

In a strong position due to his motivation and newly-gained international respect, Saakashvili is in good stead for the second part of his mandate. It remains that the lawless zones of Abkhazia and South Ossetia will play a role in the destiny of modern Georgia. There where good will is simply not enough.