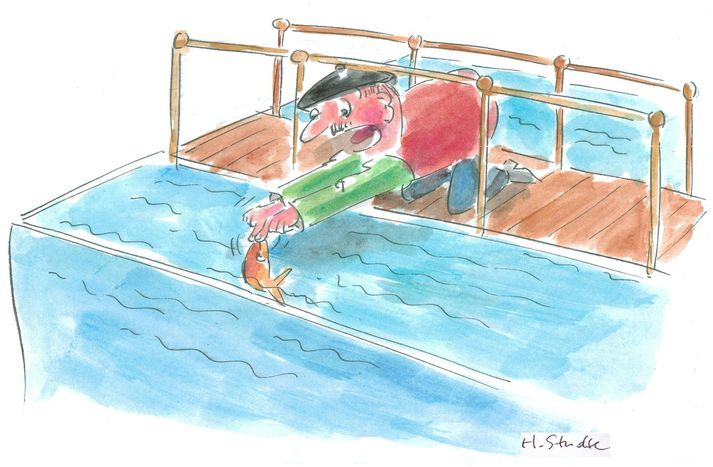 Beat around the bush

No other Yiddish word is probably more used in the German language than ‘Tacheles’. The variation of ‘Tachles’ comes from the Hebrew word ‘Tachlit’ meaning aim or objective. In German the saying ‘Tacheles reden’ means ‘get to the point’ - defying that other idiom of 'cats going around the porridge...'

The Brits may beat around the bush, but the Spaniards literally go around the branches of a tree (andarse por las ramas) instead of getting to the point. The Germans share the woody sentiment: they go from a wooden stick to a log (vom Hölzchen aufs Stöckchen kommen). The Poles will get the Spaniards to come down from the trees and get to the point (bez ogródek) by ordering them to shoot straight from the bridge (prosto z mostu).

The Germans, Spaniards and Italians have hairy teeth to help them be more direct

The French, who are usually so allergic to anglicisms, ask you to speak cash (parlent cash) when they don’t want you to mince your words (or as the Germans say, don’t want you to put a leaf in front of your mouth - Blatt vor den Mund nehmen – but that’s for another tower of babel post). The French also ask you not to drown the fish (noyer le poisson) – that is, to tire him out by flapping him about on your line before pulling him out of the water. The Germans too have a fish-related expression to convince you not to cloud the issue: the statement Butter bei die Fische (butter with fish) suggests a fish plate will go down well with a smattering of butter, or make it taste better immediately, and so the issue will finally be resolved. But possibly the cutest idiomatic award goes to the German cats who go around the porridge (wie Katze um den heißen Brei herumschleichen) to evade the point in hand, and call a spade a spade.