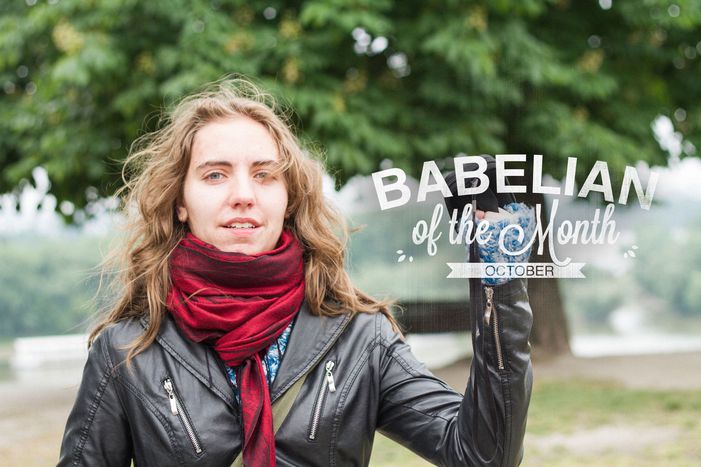 Marianne did not wait until refugees came knocking on Hungary's door before she started talking about them. She's been installed in "Orbanistan" for three years now, though she was made in the south of France. When she writes for cafébabel she contributes a more human take on a country that is often misunderstood, without a doubt fueled by her love of icecream and yoghurt.

cafébabel : Tell us a little about yourself.

Marianne : I was born a few months before the fall of the Berlin wall in a little town in the south of France. During my 21 years, I've lived in three different countries, including Hungary for the last three years. I like riding my bike without a helmet. I am mad about metal, but my favourite band in the world is Of Monsters and Men. This winter I'm going to fulfil my teenage dream of spending three months in Brazil with Workaway. My open mind stops short of people who don't like tomatoes. I like graphic novels in all their forms. I am a committed feminist. I'm capable of doing an awful lot for an icecream or a yoghurt. I love spending hours on YouTube and I follow more than a hundred bloggers. I am very emotional. My favourite author is Mona Chollet. I am really interested in alternatives which fight against the hegemony of global capitalism. Only one of my ears is pierced. I am afraid of locusts because they make helicopter noises. It seems I often talk in my sleep. I nearly know La Classe Américaine by heart. I cut my own hair and sometimes the results are surprising. I hum at every opportunity because it helps me to be less stressed.

cafébabel : If you could have dual-nationality, which would you choose?

Marianne : From a purely practical and rational point of view, because I have had the good fortune to be born in the Shengen area, it doesn't make much sense to ask for dual-nationality with another european country... maybe a nationality that is difficult to obtain but with a magic passport that opens loads of doors. Like Canadian! From a more sentimental viewpoint, Finnish nationality would be nice. I like the country and I identify a lot with the culture even if it would be difficult to handle the climate!

cafébabel : Which country would you like to live in?

Marianne : Tough question! I would like to try them all! I change my mind every month, but if I have to pick right now... I would like to try Slovenia. The country is exactly half way between the south of France and Hungary, and it's a perfect mix between Latin culture and the culture of Central Europe and the Balkans. I also like a warm summer climate, and very cold winters. Slovenia is this little pocket of countryside between high mountains just two hours away from the turquoise sea. It's little capital also resembles the village in The Smurfs and it looks like a very nice place to live! Also, for the festival Metaldays which I've been going to religiously for 2 years!

La Classe Américaine - "We are going to eat chips."

cafébabel : What's your catchphrase at the moment?

cafébabel : If you could name three countries where life is better than in your own, which would you choose and why?

Marianne : Since I have lived in Hungary, and despite all of my love for this country, I have had some occaision to realise that France is a country that takes care of its inhabitants, notably thanks to the welfare allocations and redistributions which you can rely on there.

Even more so than France, I'd like to say Finland for the same reason. The state does not seem to treat its citizens like adjustable variables and it's always used as a laboratory for all sorts of social reforms despite the views of certain regressive conservatives, like soon, with the introduction of a basic income, it's very exciting to follow!

Outside of Europe, Costa Rica, for all that they have tried to do for social welfare and the environment. All these countries of course have their down sides and their excesses, but I appreciate seeing new things being tried that run against the dominant doctrine!

cafébabel : What is the last cultural object to be put on your bedside table at night?

Marianne : Not really having a bedside table in my tiny bedroom in a shared flat, we can replace the table with a reading lamp and my laptop, on which I can fit more cultural objects in a day than a bedside table could accomodate in a whole year! The last thing that I watched was the TV series Masters of sex by Michelle Ashford, which is freely inspired by the life of Virginia Johnson and William Masters, the first two researchers into human sexuality who lived in the 50s and 60s. The series is sublime due to its very fifties aesthetic, setting the scene in a very inventive way. The superb actors recall the passion of the time and it satires contemporary society successfully by touching on the problems of the era. It's also the most feminist series that I've seen in a long time, and if only for that, it's awesome!

cafébabel : Where can we find you on a Friday night?

Marianne : In the pub with friends in the process of drinking fröccs (a white wine spritzer. ed.). I am not even ashamed that I like them.

cafébabel : What advice would you give to Viktor Orban?

Marianne : Well! If I can really only give one piece of advice, it would be to stop dramaticising the arrival of migrants in Europe (though he is not the only one doing this). Another side of the same problem, stop treating the exodus of young people from the country like it's just a passing fancy and not the result of structural problems which we don't dare to attack head on.

cafébabel : If you could interview someone (living or dead), who would you choose?

Marianne : What a difficult question! I would very much like to a joint interview with the bloggers DariaMarx, Mirion Malle and Valérie of the blog Crêpe Georgette, where we could talk about the internet, feminism and comic books all the time!

cafébabel : Do you prefer to know a lot about a few things, or a little about lots of things?

Marianne : I would love to know a lot about a little and to be more specialised but it is so exciting to have even a brief perception of areas in which I don't know a thing! The internet often gives you this opportunity, and if that means I seem a little scattered and unable to concentrate it's a chance that I'm willing to take! Just the other day I read an article titled "The best gay fanzines of the last hundred years", you must admit that would have been too good to pass up!

cafébabel : You've just won an Oscar: who are the people you thank?

Marianne  : It's a cliché, but of course I would thank those awesome humans who are my parents who are always there to give me advice and listen to me when I come undone. Overall all my family for being so united and encouraging. My girlfriend Hélène who is and will be again a source of extroadinary inspiration, and more than that my drive to push for new things! If I really won an Oscar I suppose I would also thank the crew and sponsors of the film. After all, they made it!