Azerbaijan on the brink of revolution?

Tension is mounting in Baku. After the murder of journalist Elmar Huseynov, YOX - a youth movement based on the model of PORA, the movement behind the successful revolution in Ukraine - has been formed. 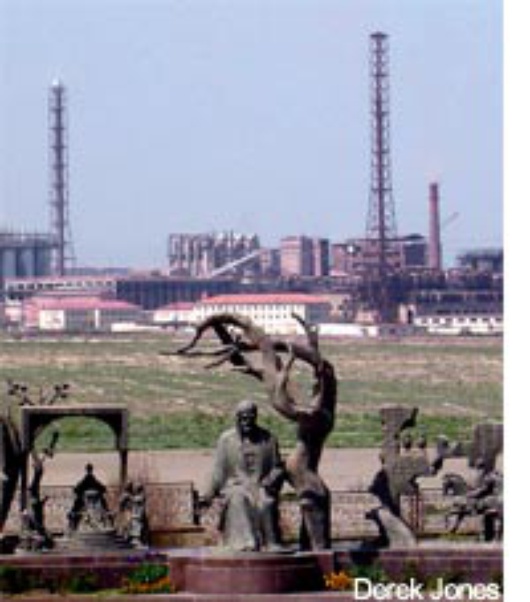 “If the upcoming parliamentary elections are rigged by the government, then I would say that a possible revolution is not out of the question.” This is the view of Isa Gambar, head of one of the largest opposition parties in Azerbaijan. Whereas representatives of the opposition believe a revolution in the style of those already seen in Georgia and Ukraine could be on the cards in the near future, those in President Ilham Aliev’s entourage believe the prospect is merely hypothetical. The President himself, who took over his father’s office around 17 months ago, claims “A revolution in Azerbaijan is unlikely”, while Aydin Mirsasade, the leading civil servant in the ruling New Azerbaijan Party, says that the country will make rapid progress, therefore making a revolution in Azerbaijan unnecessary.

Death of a journalist

In light of Azerbaijan’s depressing economic situation, its high rate of unemployment and high levels of corruption, Mirsasade’s view seems somewhat absurd. The trumped up presidential elections in 2003 and the following wide-scale persecution of opposition members dealt a heavy blow to the development of democracy there. Attacks on journalists that criticise the government have become an all too familiar occurrence over the past few years. As a result of accusations that he “took part in the unrest in the Azerbaijani capital, Baku, following the presidential elections in 2003”, Rauf Arifolgu, editor-in-chief of the most influential opposition paper ‘Yeni Musavat’, spent almost 18 months in prison. It was only in March 2005 that he was freed as the result of pressure from the Council of Europe. More tragic, however, are the events experienced at Monitor, the weekly Russian-language magazine. As the magazine focuses on corruption, contravention of human rights and the struggle for power within the ruling group, many law suits have been brought against its journalists. Despite continuing harassment and threats, the editors of Monitor continued their work. On 2 March 2005, editor-in-chief Elmar Huseynov was brutally murdered on his doorstep. It is therefore something of an anomaly to speak of freedom of the press in Azerbaijan.

The ten-year presidential reign of Heydar Aliev, from 1993 to 2003, was marked by an extensive centralisation of power. Nevertheless, the independent press was able to establish itself. But since his son Ilham came to power in October 2003, the opposition and the independent press has found itself in the worst situation since Azerbaijan won independence from Russia in 1991. A partisan parliament, where the overwhelming majority of MPs belong to the ruling New Azerbaijan Party, and the fact that the judiciary is nominated, as a matter of course, by the ruling executives, hinder any attempts to try and make the country more democratic. Even Georgia under Shevardnadze, Ukraine under Kuchma and also Kyrgyzstan under Akayev – three former Soviet states that have seen a revolutionary change of power recently – had populations which enjoyed more civil freedoms than the people of Azerbaijan today. The starting point for the democratic forces is far more difficult, particularly as they were bitterly divided until recently. However, it appears as though the Azerbaijani opposition has learnt from past elections. The leading figures of the main opposition parties, Musavat, the Azerbaijan Popular Front and the Azerbaijan Democratic Party, have declared they are in favour of setting up a single election block for the parliamentary elections coming up in autumn 2005.

The new youth protest movement in Azerbaijan, called YOX (Azerbaijani for ‘no’), also lends hope that change is possible in the country. The movement has taken its place alongside movements in other emerging democracies, such as KMARA in Georgia and PORA in Ukraine. “We are fighting for a democratic change of power and protesting against the corrupt regime that currently exists in Azerbaijan.” So describes Razi Nurullayev, the main thinker behind YOX, the aims of his organisation, which currently boasts many thousands of young Azerbaijanis in its ranks. The popularity of the peaceful movement is growing, not only in Azerbaijan, but also amongst Azerbaijanis who are studying abroad. YOX is also in active contact with its sister organisations in neighbouring countries Georgia and Ukraine.

Reactions of western democracies are of decisive importance for the future of the new democratic movement in Azerbaijan. Many Azerbaijanis believe that the pardoning of 114 political prisoners by President Ilham Aliev on 22 March 2005 was down to constant and ever intensifying pressure from the Council of Europe. This pressure gives the opposition more hope that democracy will soon win through in Azerbaijan. The people expect Europeans to be resolute and firm with the Azerbaijani leadership in talks on human rights.