At the age of 31, he made history by becoming Europe’s youngest leader. On the 15th of October 2017, his party won the parliamentary elections in Austria. Two months later, he formed a coalition with the far-right Freedom party (FPO). But how did this hardliner get there so quickly?

The fields have a golden glow in the afternoon sun. There are lush apple trees in the distance. Up close, happy faces, guinea pigs and photos of children decorate the scene. Idyllic elevator music is playing softly in the background to complete the video’s aura. No, it’s neither a commercial for the Austrian farmhouse cheese Bauernkäse, nor for settling family liability insurance. It’s a campaign video, and the protagonist is Sebastian Kurz, Austria’s young and seductive chancellor. He stands tall and slim, always perfectly shaved. He has a head of full, black hair and blue eyes on a face that evokes a Dorian Gray-esque air. His silhouette is the main attraction, always moving (often in slow motion) with a figure-hugging suit that is meticulously tailored. Not just for the election broadcast, but all the time.

Aside from being impeccably dressed, Kurz is close to his people and particularly convincing. The cherry on top of the cake is that he’s competent, despite his young age. Basically, he’s perfect. Still, he often appears impersonal and contrived in public appearances. “I studied economics, you studied the ÖVP (Austrian People’s Party, ed.),” his opponent, Peter Pilz, who used to be a member of the Austrian Green Party, said in a televised duel. “And you have enjoyed an excellent education,” he adds. Is this a potshot at Kurz’s discontinued studies, or simply recognition for the fact that the ÖVP leader knows how to present himself? Perhaps a bit of both.

At 17, Sebastian Kurz joined the ÖVP’s official youth wing and abandoned his law studies six years later to become the party’s chairman. Today, his law studies don’t even appear on his CV. His girlfriend Susanne, however, has remained close to him ever since their time at school. They live together in Meidling, a working-class district in Vienna where Kurz grew up. In public, the child of an engineer and a professor presents himself as calm, reasonable and courteous. Family values are very close to his heart.

But Kurz has some work to do on his image as Austria’s perfect son-in-law. When he was elected minister for Europe, Integration and Foreign Affairs in 2011, he found himself being ridiculed by the media. According to newspaper Der Standard, Kurz was only thinking of partying and therefore had no idea about integration policies. This was an era that shaped the young politician. He learned not to follow the polls or the opinion of the media, and eventually the mockery subsided.

At the age of 27, Kurz was eventually appointed youngest Foreign Minister ever in Austrian history. In July last year, the 31-year-old was elected chairman of his party, just in time to become the top candidate for the parliamentary elections in October. Sebastian Kurz is now Europe’s youngest head of state ahead of Jüri Ratas (38) and Emmanuel Macron (40). 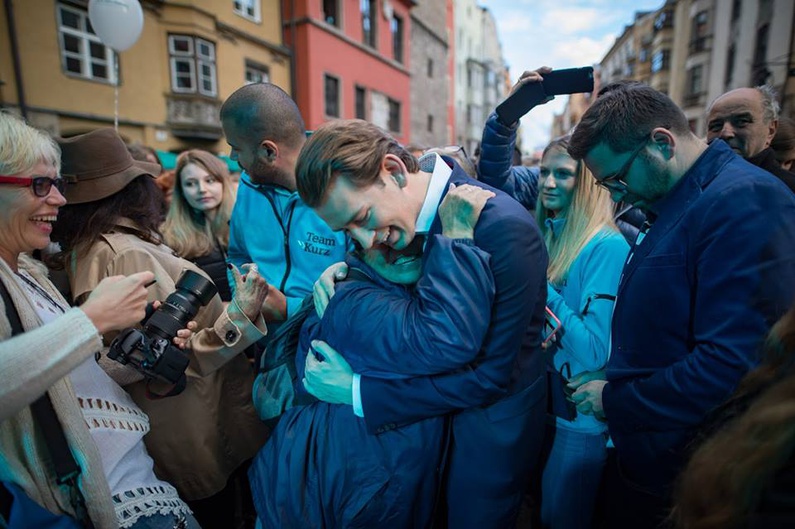 Despite his swift political career (Time Magazine nominated him as one of the 10 next-generation leaders), Kurz still receives a lot of criticism. With sharp-tongued speeches and provocative statements, he has established himself as a hardliner whose focus tends to the right. But what actually makes him so different from the old ÖVP strategies? His confidence, and that of so many Austrians with regards to the promises he makes. People trust him. “Mr. Kurz has already demonstrated his ability, in his role as foreign secretary, to represent Austria diplomatically and neutrally,” says 34-year-old Ina Kumanovic-Heindl, who supports Kurz’s campaign on social media. At home, the young leader has challenged the “established” parties, much to their annoyance. Kurz talks specifically about the concerns of the people, condemning his political opponents and inspiring people with his energetic and provocative style that appeals to many Austrians.

Kurz’s ambitions were never a secret. The young wolf’s demands with regards to the party caused a great deal of debate. But the ÖVP has been suffering since it lost its majority in the 2006 elections, unable to renew itself or deal with the rise of the far-right FPÖ party. For many, Kurz represents a kind of hope: a leader that will revive the party from the inside and start from zero. And he won’t disappoint. Before being elected head of the party, he promised he would create a coalition with Austria’s Social Democratic Party. In the short-term, he created an independent list of candidates in the national council elections and the opportunity to veto candidates on the regional lists. Critics claim that the ÖVP has given up its intra-party democracy. So is it any wonder that the newly crowned leader named the new movement after himself? “Vote Sebastian Kurz - the new peoples party”. The colours of the party also changed from a classic black to a fresh turquoise. Party members embraced the changes and this transfer of power, voting him in on the 1st of July 2017 with 98% in favour.

This was well received by Austrians. During May last year, when the previous ÖVP leader Reinhold Mittlerlehner resigned and Kurz took the reigns on the 1st of July, polls showed a boost of more than 10%. There are also followers in neighbouring countries. A German fan on Facebook wrote that he has “heart, mind and charisma.” Adding that: “We can only dream of that in Germany.”

Living on the edges of the right

Sebastian Kurz owes his success to the issue of migration. By the end of 2015, thousands of Syrians had travelled through Austria on their way to Germany, and Kurz initiated the closure of the Balkan route (main passageway for refugees coming into Eastern Europe, ed.). What came after was a chain reaction of closed borders, without the involvement of Germany or the EU, which hailed international criticism followed by the EU-Turkey agreement. Both the closing of the Balkan route and the agreement were heavily criticised by aid organisations. Nonetheless, Kurz announced his wanting to close the Mediterranean route one year later. He discredited NGOs rescuing refugees from the Mediterranean and advocated the creation of refugee camps in African states. These proposals didn’t make him less popular in Austria, though. Instead, Kurz incarnated fortress Europe long before his European colleagues joined the ranks.

“When he was minister for Integration, we could see that Kurz wasn’t interested in the successful integration of our new citizens. His personal switch in attitude regarding migration is therefore not surprising. Sebastian Kurz stands for nothing, he just jumps on the bandwagon of public opinion in order to achieve the biggest gain. That’s what many politicians do, but generally they are not praised as Messiahs for their party,” underlines Livija Marko-Wieser, a student in international relations.

In fact, Kurz did not always hold such right-wing attitudes. “The average migrant of today has a higher level of education than the average Austrian,” he said in 2015. His FPÖ opponent Heinz-Christian Strache described him as a “late-bloomer”, given his recent drift to the right. The strategy is quite well known: Kurz is looking to win votes from the edges of the right. But comparing his program to that of the extreme right-wing AfD party in Germany or to the National Front in France would not do justice to his program either. Even if he is intrigued by some parts of the AfD, Kurz distinguishes himself by engaging himself in the European project. 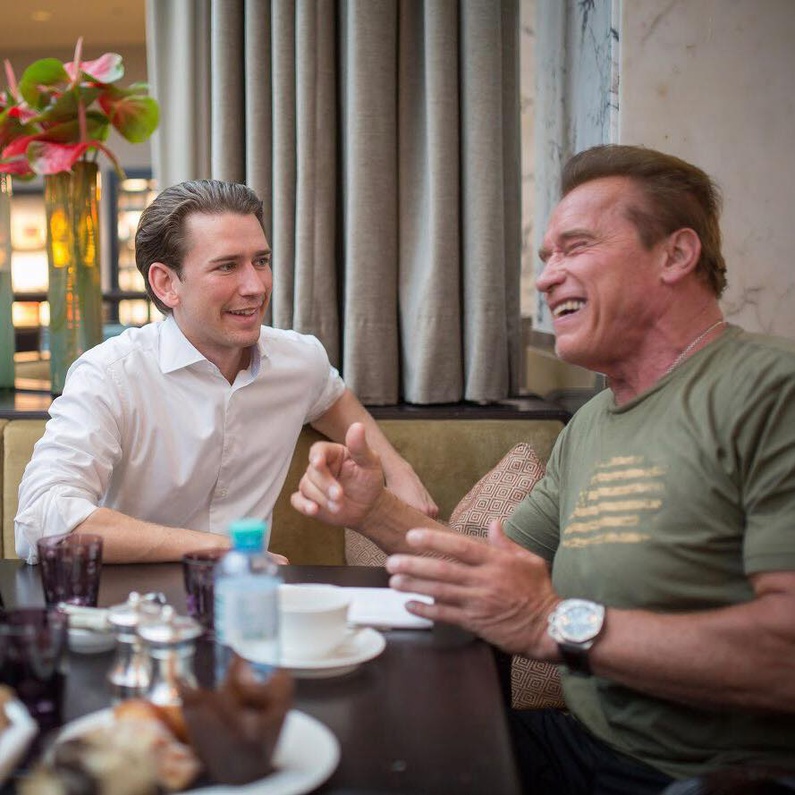 What is left in Austria and Europe today is the image of a young politician who is less idealistic than he is pragmatic. He not only won the respect of many Austrians through his work as minister of Foreign Affairs, but also represents a hope for change. “I don’t fully support Kurz,” says Ina Kumanovich-Heindl, a young Austrian, “but he does represent the best option for our future.” Livija adds that: “Kurz is clearly only interested in his own success and his own career… people tend to see more in him than what lies behind him.”

One thing is certain: Kurz represents a new political era in which populism is embodied in some sort of glossy image. The idea of politics focusing heavily on one man who rallies against political Islam, who promises security and prosperity for his country using simple slogans obviously works. Thanks to his age and professional image, Kurz doesn’t look a thing like Putin and company. He seems to be an uncompromising, lifelong flying starter, and his latest move was to strike a coalition deal with the FPÖ. The rest is history.