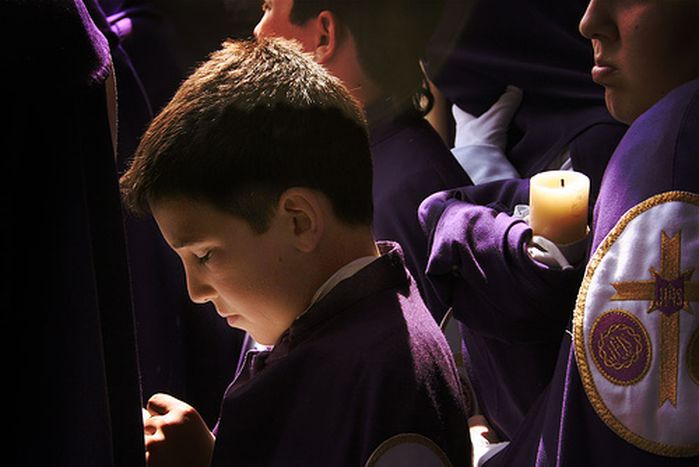 London's atheist bus campaign, a backlash against Christian advertising on the underground, is now touring Europe. Next stop: Barcelona and with it traditional Spain, where catholicism still carries a lot of weight

Spain's crucifixes tremble as Barcelona's buses go past. God probably doesn't exist blaspheme the mobile ads in Barbie-pink. Below, in red and yellow Stop worrying and enjoy your life. Launched on 12 January, a week after banks, town halls and shops took down their nativity scenes at the end of the festive period, the campaign has not gone unnoticed. Whilst most are still wishing each other a happy new year at the beginning of January, the catalan union of atheists and free thinkers decides to launch a public debate.

The slogan is simple, the reception as lively as the colours. Has the devil himself come to Barcelona? The campaign has crossed the channel and is spreading throughout Europe. It all started with an article in The Guardian by Ariane Sherine in June 2008. Irritated by a catholic association's adverts on the underground, she launched a counter-campaign.

The idea spread like wildfire. According to Spanish daily El Pais, Birmingham, Manchester and Edinburgh, as well as Washington, have had the buses trundle through, and soon Seville, Zaragoza and Bilbao will have the honour. The catalan union of atheists and free thinkers' words also shine out from the pages of the Spanish press, thanks to a prior internet fundraising campaign and significant help from the British defender of atheism, Richard Dawkins.

The atheist buses carry their message across inhospitable terrain. Almost eight out of ten Spaniards call themselves catholic. Though the numbers are dropping significantly, statues of Christ are still present in some public spaces. As for ministers, they may be sworn in on the constitution, but they face a crucifix. Never mind state funerals, which include a liturgy. Spanish culture is thick with Catholic tradition, especially with regard to festive periods: the constant processions mean that agnostics get pretty tired of marching bands and their drumrolls.

Almost eight out of ten Spaniards call themselves catholic

Article 16 of the 1978 constitution, however, states that 'no faith shall be the state religion'. The third paragraph underneath, on the other hand, creates a certain ambiguity: 'The authorities take into account the religious beliefs of Spanish society, and so remain in a state of cooperation with the Catholic church and other faiths'.

In November 2008, the decision of an adjudicator in Valladolid, northern Spain, kept the fires of controversy burning. Following a father's complaint, he ruled that a secondary school must remove all crucifixes. 'The constitution says that Spain is a country without an official religion, and so schools should also be neutral in this regard,' declared the education minister Mercedes Cabrera, trying to stop it from becoming a political issue. The socialist party (PSOE), who are currently in power, have been saying that they want religious symbols removed from public places and official documents since July 2008. But according to El Pais, four billion euros a year are indirectly handed over to the church. The representatives of Spain's most prominent religion have influence, and repeatedly make their views known through the media.

Prime minister Rodriguez Zapatero can't just click his fingers and make more than six centuries of history disappear. However, catholics, jews and muslims did once live together in medieval Spain. Not without incident, admittedly, but the three monotheistic religions managed eight centuries in the same place. Up until the end of the fifteenth century, christians put steeples that were 'more in line with church doctrine' on minarets. Spain is very definitely rife with contradictions past and present, at its heart a fault line between two ways of thinking that are constantly at odds with one another. Religious conviction may persist there, but ideas are moving on, as shown by the decision in October 2004 to allow gay people to marry and adopt children - crucifix on the wall or not.