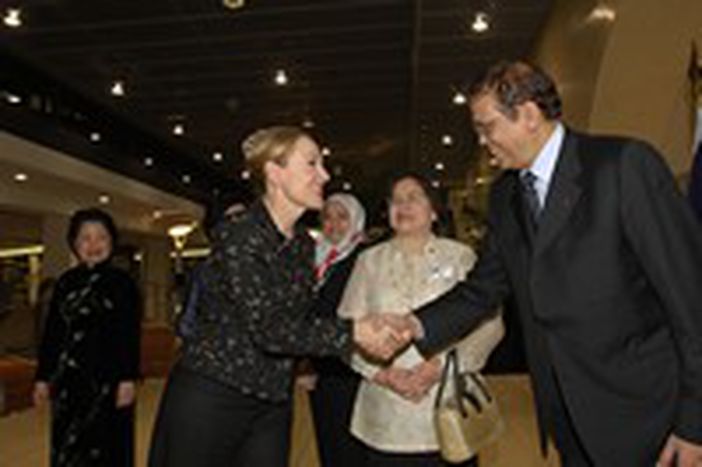 ASEAN and the EU: singing from different hymnals

As regional integration accelerates in Asia, ASEAN might one day resemble the former EEC. I talked to Ludo Cuyvers, professor of economics at the University of Antwerp, who says such comparisons are premature.

The ASEAN announcement that they wished to create an AEC (ASEAN Economic Community) by 2020 had initially led to favourable comparisons between ASEAN and earlier versions of the EU. But “huge discrepancies between member states” cast doubts over the emergence of an EU style regionalism Ludo Cuyvers, an expert in Asian economics, explains.

However, ASEAN members, as Prof. Cuyvers is quick to note, “are reluctant to give up national economic policies vis-à-vis non-members and to delegate power to some supranational body”. This implies that ASEAN “endeavours to establish a single market without having installed a customs union or having created some supranational authority”.

Furthermore unlike the EU, the political systems of the ASEAN members range from absolutist monarchy, through military junta to one-party communist state. With such discrepancies, true economic integration of its members, Indonesia, Malaysia, the Philippines, Singapore, Thailand and more recently Brunei, Vietnam, Laos, Myanmar and Cambodia seems highly improbable.

Seas and straits separate ASEAN countries, but there is also an unseen gulf between groups of member states, as expectations of what ASEAN is and should be doing vary enormously.

Frustrated by the slow progress in trade negotiations with China and Japan, several richer ASEAN members, led by Singapore, have signed bilateral trade agreements in recent years. These actions are revelatory of “the enormous gap between members: some want to negotiate collectively while others aim at quicker progress and thus switch to bilateral trade agreements”. Prof Cuyvers notes, “bilateral agreements could prevent the emergence of a free trade area in East Asia given their increasing complexity”.

Richer members who joined ASEAN to “enhance their global competitive position” are now breaking rank and signing bilateral agreements. Faced with such lack of solidarity, poorer members “are quick to remind the more developed ones that ASEAN should primarily focus on enhancing intra-ASEAN trade and on closing the development gap within ASEAN”. They joined the organization in the hope that ASEAN would reduce inequalities within the region.

Until the actions and expectations of the richer and poorer member states can be reconciled, the future of ASEAN remains uncertain.

As an organisation, ASEAN differs greatly from any previous incarnations of the EU. Prof. Cuyvers explains “ASEAN was established by a declaration and not by a treaty, meaning that it completely lacks any legal personality”. Its weak powerless secretariat and hugely dissimilar members imply that the organisation, from its inception, was never going to be as strong as the EU.

Though ASEAN may not resemble the EEC, ASEAN is not without its successes. It has achieved “significant results in the monetary field”, notably a currency swap agreement, known as the ‘Chiang Mai initiative’, which “was an important step towards financial stability in the region”. It has increased dialogue between Asian states. The recent ASEM talks in Finland are one example of ASEAN’s role in the promotion of dialogue focused specifically on South-East Asia. ASEAN+3, the organisation’s annual meeting with China, Japan and South Korea is, according to Prof. Cuyvers, “more promising for East Asia than APEC”.

ASEAN has one other great triumph; it has introduced whimsy into the staid world of diplomacy. Every year, ASEAN calls upon foreign ministers from partner countries to perform at a gala dinner. Past years have seen Colin Powell perform YMCA in costume, Japan’s Taro Aso mumble through a Humphrey Bogart impression, and Canada’s Peter MacKay recreate Zinedine Zidane’s infamous head-butt. It seems what ASEAN lacks in legal personality, it definitely makes up for with its sense of humour.