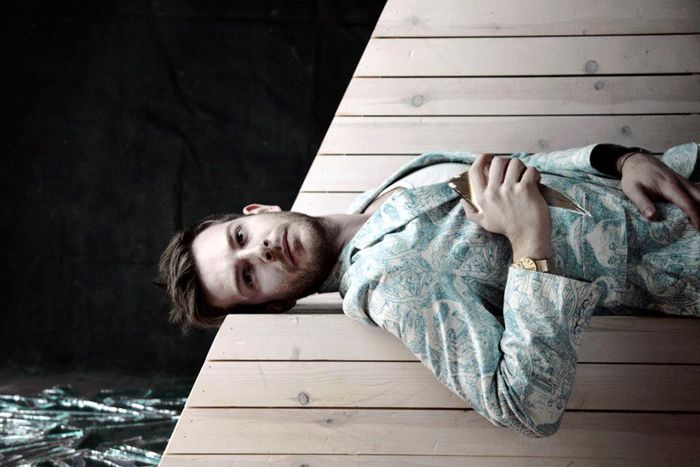 A small crowd blows cigarette smoke skyward as a blaze of harsh fluorescent light spills from a towering doorway across the cobbled street in Athens’ slightly seedy Metaxourgio neighborhood. Unmarked by any sign, this is one of Athens’ most respected galleries – The Breeder.

Tonight, 30 March, it plays host to a throng of about 100 artists, art lovers and gay rights activists who have gathered for the fifth annual Artists for Athens Pride auction, writes Austin Fast

After starting the bidding at 200 euros per artwork, Breeder gallery director Nadia Gerazouni and co-owner Stathis Panagoulis spur on the chatty crowd to bid higher and higher, reminding them that nearly all the funding for the artists for Athens pride festivities on 8 June comes from this auction. Thwap thwap! Stathis raps a neon pink golf ball against a stark white podium signaling bidder #19 will take home the last of the 28 pieces. The guests file upstairs for a final glass of white wine, while smoke rises across the street from a grill where some of the artists are frying up traditional Greek koftas. Motorcycles fire up and attendees head off into the traffic-choked streets of an Athens Saturday night. 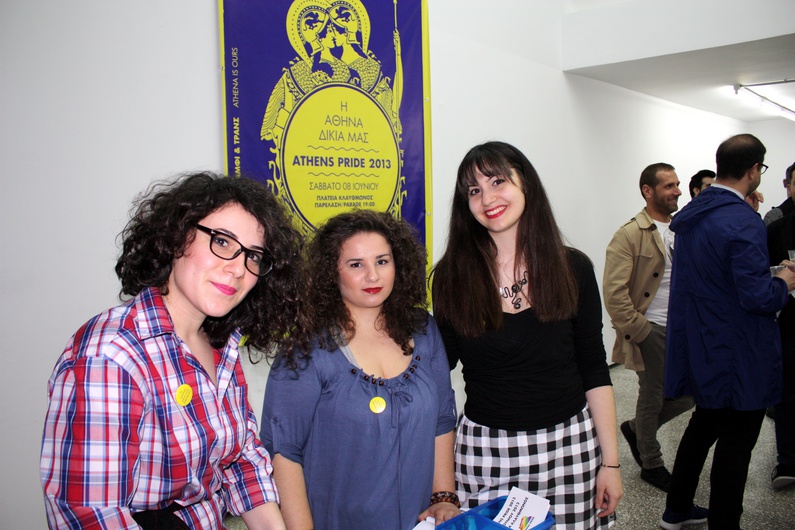 Although historians agree that homosexuality was widely accepted in ancient Greece, the country’s modern iteration is not nearly so magnanimous. ‘There is this sort of veneer of tolerance that has been enough that you can say, ‘Oh gays don’t have any problems. You have your bars. You can act queer on TV and be a subject of ridicule, like the stereotype of the limp-wristed dress designer',’ says Andrea Gilbert, who has lived in Athens for two decades. She is an art critic and the curator of the ninth edition of Athens Pride, which also organises the fundraising art auction. ‘In terms of serious respect, we have a long way to go in state protections and recognition.’

Greece ranks among the lowest of the European union in terms of legal human rights afforded to lesbian, gay, bisexual and trans people, according to the international lesbian and gay association’s Europe rainbow index from May 2012. Only Latvia, Cyprus and Malta fall below Greece. It is the sole country ranked that distinguishes a separate age of consent for gay male intercourse – 17 years of age. That’s two years more than Greece’s general age of consent.

Penelope Kaouni, general manager of Athens’ LGBT organisation colour youth, says most Greek gays and lesbians hesitate before being too open about their sexuality. ‘The general atmosphere is that it’s OK to be gay if you don’t show it,’ Penelope says. ‘As long as you’re not ‘provocative’ by hugging your partner in public or let alone kissing them, it’s OK for you.’ In August and September 2012, three separate incidents of gay hate crime struck colour youth activists, who were beat up simply for being gay. Penelope pointed the blame at a general push toward conservatism spurred by the rising Greek nationalist party golden dawn. ‘You can’t tell the number (of attacks) because in many cases they don’t report it,’ claims Penelope. ‘If you’re not out, reporting a homophobic crime means that you’re essentially going to come out. And then, let’s face it, police in Greece aren’t exactly well-informed on what to do in the case of a homophobic crime.’

Presiding over the auction in the Breeder’s spacious gallery, an enormous poster picturing lesbian lovers declares ‘Athena is ours’. Athens pride organiser Andrea admits she hopes the poster will cause a stir in light of the golden dawn party’s homophobia. ‘This slogan is about reclaiming the city because there was all this violence. Whether real or in cyberspace it was all intimidation and terrorism from the far right. Most of it is in cyberspace, but it’s enough to keep people away because we’re dealing with a population that is still deeply closeted and fearful.’ The art auction has covered about 80% of the cost of Athens pride events since the Breeder gallery first suggested it to Andrea in 2009. In 2011, the event reached a high point with famed Greek actress Themis Bazaka bringing drag queens to mingle among the crowd, whose enthusiastic bids covered 99% of the pride that year. 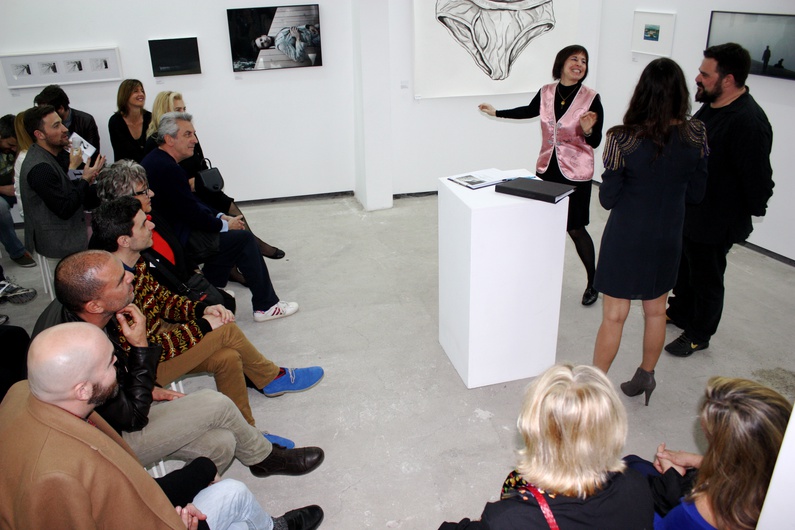 Artist Angelo Plessas donated artwork to the auction this year, seeing it as the best way he can help gay rights in Greece. Many young people live with their parents well into their thirties in Greece’s family-based society, even before the current economic crunch. Angelo says keeping a double life secret can cause serious psychological trouble for young gays and lesbians. ‘We have to do Athens Pride every year to raise awareness of being proud of what you are,’ Angelo says. 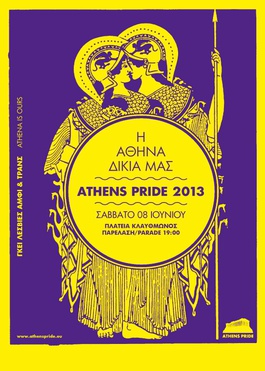 Sitting on a silver couch in an eclectically decorated apartment overlooking the Aegean Sea, Angelo tells me despite Greece being a generally homophobic country, he and his partner of 14 years almost never experience homophobic reactions in Athens. ‘Greek society – as in the people – is much more gay friendly than how the politicians react,’ Angelo says. ‘There’s always rhetoric and promises but (politicians) never do anything.’ After living thirteen years as a Greek expatriate in Amsterdam, artist Antonis Pittas says he wouldn’t donate artwork to benefit gay pride events in the Netherlands. ‘Amsterdam has Heineken donating and the gay pride there is all marketing. Nobody there thinks of a gay parade as a revolution, but as a party,’ says Antonis. ‘In the Balkans, it has this other element. They are fighting for greater rights. This makes sense here.’ 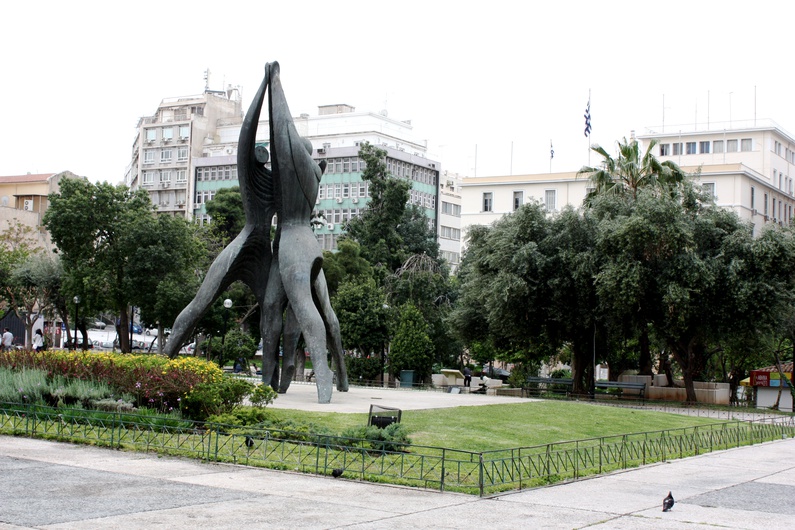 A week after the auction, about thirty young Athenians are passing around cookies and drinks at a colour youth meeting underneath soaring palm trees at the national gardens. Signs bearing homophobic slurs for a video awareness campaign lay abandoned on the grassy lawn as long-haired member Kimon guides the group through a series of high-energy games. It’s obvious they’ve all bonded closely – one of the goals of colour youth is to provide a safe space for young gays and lesbians to find support as they’re coming out. They’re also planning a series of activities for Athens pride including an LGBT olympics and choreographed dances to keep spirits high throughout the day. ‘In a society where LGBT people are invisible, it’s great to have this one day when they’re not and people can realize we’re not that different,’ says Penelope. ‘My first pride was exhilarating. I felt such a sense of belonging, and for many people it’s exactly that.’

This is the second in a series of special monthly city editions on ‘EUtopia on the ground’; watch this space for upcoming reports ‘dreaming of a better Europe’ from Warsaw, Naples, Dublin, Zagreb and Helsinki. This project is funded with support from the European commission via the French ministry of foreign affairs, the Hippocrène foundation and the Charles Léopold Mayer foundation for the progress of humankind