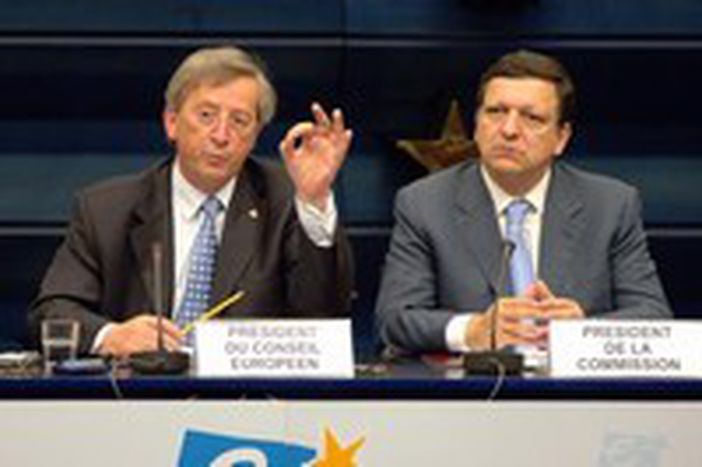 The summit of European leaders held in Brussels on June 16-17 adjourned without a compromise on the budget, despite concessions by the new member states. How did it come to this?

Thursday 16, it is about 4pm at the Château de Meise, a few kilometres away from Brussels. Present alongside the other right-wing heads of state and government in a meeting organised by the European Popular Party (EPP), the Austrian Chancellor Wolfgang Schüssel makes his views known about the constitution: “I don’t like the word ‘pause’, which means lying back in the grass, making the most of the good weather. I’m for an active phase, where we go down into the street and explain why this constitution is good.” A look at his feet shows the Chancellor is wearing trainers with his suit.

The next day at around 5pm, this time we are Jacques Chirac’s hotel. In a “rare occurrence”, as noted by the journalist Béatrice Gurrey in Le Monde, the French President has convened a press conference here to give, off the record, some precisions on the concessions the French are willing to make for an agreement to be reached over the budget. Apparently, Paris is ready to contribute up to 1.06% of its GNP and to make do with a freeze of the British rebate (which currently goes up each year).

It was only after the rather hurried discussion the previous day on the constitution that on Friday morning the Council attacked the main subject on the agenda: the negotiation of an accord over the EU budget for 2007-2013. Even if it is perhaps a little early to be discussing such matters, since May 29, when France rejected the European constitution, it has been said that an agreement on the budget would be a strong signal that Europe still works and the best way “for Europe to move forward”. In other words, everything has been done to make us fear another Nice, an agreement which was based on an uneasy compromise. Perhaps this explains why Chirac glosses over the facts, hoping, no doubt, to make us forget that his propositions are flimsy; very flimsy.

Chriac stipulates that, in exchange for French “efforts”, the money received by French farmers must remain unchanged. He says it is “absurd” to claim that the Common Agricultural Policy (CAP) is archaic and that it is not “civilised” to throw into question an agreement over agricultural policy, which was signed in 2002 and is due to run until 2012. Basically, he manages to get in a good Blair-bashing and, to boot, the press announces minutes later that France is ready to make new concessions. Chirac is able to go into the crowd shaking hands, the message has got through.

Uncompromising, and supported by the Dutch and the Swedes, Blair won’t hear any of it. He refuses the Luxembourg presidency’s budgetary proposition, which he labels as being “worse than the previous one [drawn up by the Commission]”. The press agency Reuters announces the end of the summit at 11pm and everyone moves towards the rooms where the ministers give their press conferences. The news is passed on from spokespeople to journalists, from journalists to the public in rapid succession.

On Poland’s initiative, the ten new members have announced that they are willing to forego some of the subsidies offered to them in the proposed budget in order for an agreement to be reached. “To the Council, I asked the question: ‘so, since it is a question of money…how much do you want?’”, explained the Polish Prime Minister Marek Belka. One by one, the ten new countries expressed this same resignation. For a few minutes, we were able to dream. Dream that old Europe could learn a lesson from the new. That in the light of the concessions made by the ten, that each of the old 15 members would rethink their calculations and their national pride; that they couldn’t stay at loggerheads.

But, and despite “the shame” that he felt, Jean Claude Junker, President of the Council and Prime Minister of Luxembourg, had to state that the 15 had not got the message. There was to be no further negotiation for the time being. For just an hour, it seemed the Polish electroshock could wake the Council from its coma, but it was not enough.

Put on your trainers

The failure of EU leaders to reach an agreement over the budget is by no means a new institutional crisis. Of course, a quick accord would have been symbolic, even if it meant renegotiating at a later date. But rather than symbols, the European project needs to be explained to everyone, from the head of state to the farmer, from the British to the Italians. And if Wolfgang Schüssel so wishes, some of his neighbours also seem ready to put on their trainers to inform the public; all help will be welcome. Because there is work to do.