Antoine Deltour: The trial of a whistleblower

Almost a year after the LuxLeaks revelations, the trial of whistleblower Antoine Deltour and journalist Edouard Perrin opened on Tuesday the 26th April. Cafébabel Brussels was there on the first day of court proceedings.

There was a heavy atmosphere as the different parties arrived for the opening of the "LuxLeaks" court case. The term refers to last year's disclosure of legal, but unfair, tax practices in Luxembourg, in order to reduce the level of tax that multinational companies were supposed to pay in order toencourage themto come back to the national territory.

This case was brought into the limelight by the whistleblower Antoine Deltour, former employee of the auditing firm PricewaterhouseCoopers (PwC), along with investigative journalist for the TV network France 2 Edouard Perrin, and Raphaël Halet – also a former PwC employee.

It's the first time in Europe that a case of such great importance has been brought to trial. It takes place in the context of an increased willingness by civil society to recognise the importance of whistleblowers. We've witnessed this recently due to the, not always justified, anger directed towards the EU directive regarding trade secrets. 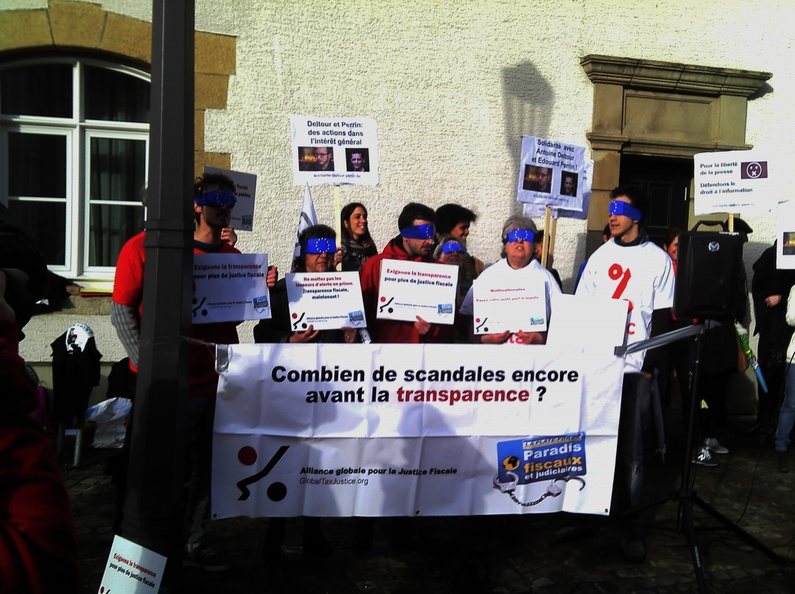 This is why the opening of the trial of these three protagonists is particularly important and was the subject of much media coverage. Many journalists were present when Antoine Deltour showed up in the hearing room with his two lawyers. One of them told him: "I have never seen that many photographers." The defendant responded with the hint of a smile.

The former PwC employee appeared quite relaxed, and his mood was later confirmed by his uncle Pierre Deltour over the course of the trial.

Antoine, as his brother Romain Deltour has already described him, is very discreet and humble. He had a modest appearance at his trial – wearing a very simple outfit – and did not answer journalists’ questions, nor did he appear in front of photographers or camera operators. His defensive approach seemed a logical extension of his recent actions, seeing as since a few days before his trial began he was already declining interviews.

Dozens of people gathered outside the Luxembourg courts to demonstrate their support for the whistleblower and other two defendants. Among them Lison Rehbinder, a member of ActionAid and representative of the anti-tax haven platform: Plate-forme Paradis fiscaux et judiciaire.

She explains that her team came here to "support the actions of whistleblowers" who work purely for the benefit of society and for the public interest. As well as this, it was important for her association to be on the ground in order to inform the public of their desire for "more tax transparency". In her opinion citizens should have access to the income of multinational companies in every country, in order to know whether their tax bill matches their economic activities.

The protest, symbolised by activists blindfolded with the European Union flag, speaks to the current fiscal opacity in the Union. The association calls for "action from member States and the European Union" for more tax transparency in Europe.

Members of Deltour's support committee were also present in court and at the Judicial Precinct. Hundreds of public figures – including Edward Snowden, Daniel Cohn-Bendit and Erri de Luca – signed a petition in support of his actions.

His uncle Pierre, among the supporters demonstrating in front of the court, told us that Antoine Deltour "leaked this information as a European citizen to unveil the international system of multinationals’ tax avoidance".

"We must support him as a citizen in his courage and his selflessness. He is the model of the ethical whistleblower. He hopes that the notion that this has been in the general interest will be taken into account by the court, and that he will not be judged like a chicken thief," he continued.

The perceived selflessness of his actions is one of the trial's key themes and one of the main arguments of his supporters. Among the placards on display from those in solidarity with Deltour include "All I want is to be cleared of accusations" and “We require transparency for tax justice”. The mobilisation is real and significant.

“I recognise the materiality of the facts”

When the trial opened, one of the judges took the floor. After a quick round of questioning allowing the defendants to confirm their identity – their date and plate of birth – the judge address the trio, listing the crimes for which they are accused.

Antoine Deltour is accused on at least five criminal counts, including the physical theft of thousands of documents belonging to PwC, as well as breaching profession secrecy, illegally accessing a computer network and making private documents public. His Luxembourgian lawyer, Philippe Penning, told us that his client risks one to 10 years in prison and between 2,752 and 1,297,500 euros in fines.

"Do you really understand the accusations held against you?" asked the judge. The business graduate answered: "I recognise the materiality of the facts. I think that my lawyers…" before the judge cut him off.

Edouard Perrin – the journalist from France 2 behind the edition of "Cash Investigation" on the subject – is also accused of having committed theft and having made public private documents, did not recognise said facts.

The trial will conclude on the 4th of May. The prosecution's position, and that of the judges, will determine future recognition (or otherwise) of the legal status of whistleblowers, tax transparency and business secrecy in Europe.