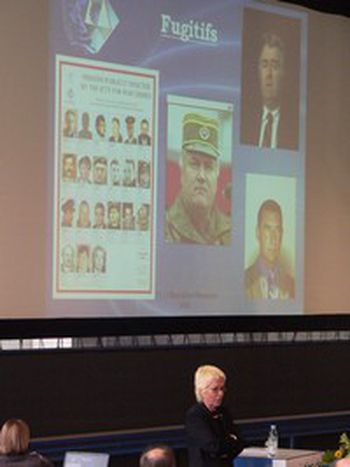 Ante Gotovina, the decline of a hero

On Thursday, the Croatian General Ante Gotovina, wanted for war crimes committed during the Balkan wars, was captured in Tenerife. It is likely that his capture will speed up the EU accession process for Croatia.

Carla del Ponte, the chief prosecutor of the UN international criminal tribunal for the former Yugoslavia, announced the news of Ante Gotovina’s capture last Thursday. His arrest is not only good news for del Ponte but also for the Croatian government since its EU accession is dependent on its cooperation with the tribunal. Like other states formerly part of Yugoslavia, Croatia had two main problems in the 1990s. On the one hand, the state had to take care of the representatives of the fallen communist regime. On the other hand, the state had to deal with members of the national military, many of whom topped the most-wanted lists of the UN war crimes court in The Hague. Croatian leadership also had to consider how critical cooperation with the Hague court was to maintain good standing as an EU candidate country. For these reasons, 625 out of 626 Croatian suspects had been handed over. All except one: Ante Gotovina.

Ante Gotovina was born in 1956 on the island of Pasman near Sibenik on the Adriatic Coast. At 16 he ran away from home to work at sea. He later joined the French foreign legion, worked for a private security company and trained paramilitary units in Argentina and Guatemala. He returned to Croatia in 1991 to make a name for himself in the Army. In the space of a year, he was promoted to Brigadier General. His crowning achievement as General was Operation Oluja (Storm) in 1995. This offensive involved Croatia’s army taking back territory that had been occupied by the Serbs since 1992, thereby ending the existence of the separatist Serb Republic of Krajina. According to the tribunal, 150 Serbs were killed and 200,000 fled in the wake of the advancing Croatian army. In the eyes of many Croatians, he is a hero.

In 2000, General Gotovina was sent into early retirement by the newly elected president of Croatia, Mesic. Scarcely a year went by before the war crimes tribunal publicised charges against him for his actions during the “Storm” of 1995. Since then, he has been on the run and his whereabouts have been unknown. In addition to the accusations levied by The Hague, a French court has already issued a 5 year prison sentence to him for robbery. Time and time again, different Croatian politicians promised to help in the search for the fugitive general - with no results.

On March 15, 2005, the EU announced that accession talks with Croatia would be postponed. A few days later, chief prosecutor Carla del Ponte stressed that Croatia was not cooperating fully with the court in its search for Gotovina. In a 20 September interview with The Daily Telegraph, Del Ponte went so far as to accuse the Catholic Church of hiding the fugitive in a Franciscan monastery. Certainly, behind the scenes, the Catholic Church had been slow to assist the Hague court. Publicly however, both the Vatican as well as the chief bishop in Croatia dismissed the accusations as false.

Suddenly, in early October, Del Ponte experienced a change of heart. Although she accused the Croatian government of dragging its feet in the search on 1 October, she announced on 3 October that Croatia was in full cooperation with the international body. Croatia and the EU could reconvene the EU accession talks. This was perhaps due to the fact that Austria was holding up the opening of negotiations with Turkey over its own EU entry unless Croatia’s accession process was restarted. But there is speculation that it was because del Ponte found out some time in early October that Gotovina was in custody in Spain.

In light of the latest developments, Croatia’s accession process should begin to pick-up steam. Pressure on Serbia will also mount, as authorities on the hunt for war criminals Ratko Mladic and Radovan Karadzic collaborate with The Hague. Still, one cannot rule out the possibility that the Croatian people will become more demanding of their own government. Ante Gotovina is no ordinary hometown hero. The whole country celebrated the 10 year anniversary of Operation Storm on 4-5 August. Who can say how people will react if an international trial casts Krajina’s liberator as a war criminal guilty of human rights violations?