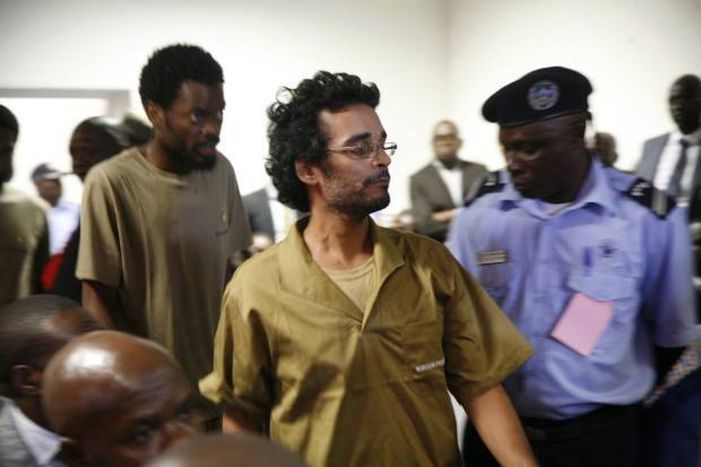 After a year of detention and more than a month of a hunger strike, Luaty Beirão finally knows his fate.

This past Monday, in a courtroom in Luanda, Angola, Luaty Beirão, a Portuguese-Angolan rapper-activist (stagename: Ikonoklasta) got his final sentence: 5 years in prison for the crimes of "rebellion" and "criminal association" after the accusations came out of the Angolan Prosecution more than a year ago.

On June 20, seventeen activists, aged 19 to 37, were arrested after forming a book club as a means to debate over the Angolan journalist's Domingos da Cruz “Tools to destroy the dictator and avoid a new dictatorship – Political Philosophy for the Freedom of Angola”. The author was also sentenced to 8 years of lock-up. The rest of the group got four years in jail.

The book is the adaptation of another book, written in 1993 by Gene Sharp, titled “From Dictatorship to Democracy”. It was also used to inspire the peaceful protest against dictatorship in Myanmar and later used by activists during the Arab Spring in Egypt and Tunisia. In 2015, it reached Angola. This version of Sharp’s book is heavily marked by the dichotomy between a “dictator” and the “revolutionary forces”. In this way, negotiations between the two factions are practically forbidden. However, even if violent acts are referred to twice in the book, the author made clear that it shouldn’t be against people or “ethically-acquired private goods and possessions”. This was not enough to stop the Angolan Prosecution.

Most of the detained activists have a past of confrontation against the regime and, as a rapper, Luaty Beirão has written lyrics against the Government and the President. The youngest defendant is the 19 year old Manuel Nito Alves, who was previously detained as a minor in 2013 for insults against the President José Eduardo dos Santos after he ordered t-shirts where the head of the state since 1979 was dubbed a “disgusting dictator”.

The group ended up being dismantled and arrested mostly due to undercover officers infiltrating the open-door meetings. From those, some videos surfaced, which have then become the Prosecution’s trump card.

Since the activists were jailed and put into custody at the Calomboloca prison, 100km away from Luanda, the most fateful moment so far started on September 21, 2015. According to Angolan law, the suspects can be detained for 90 days for crimes against national security. However, the regime kept them for longer, which motivated a hunger strike by the activists.

Some of the men couldn’t follow through but Luaty persevered and his case reached international news. During the 36 days of his hunger strike, a lot happened. He was transferred to a prison-hospital and then to a private practice where, under the close watch of guards, he received visits and letters from everywhere in Portuguese-speaking nations. Meanwhile, there were protests demanding his immediate release in Lisbon.

Many people tried to make him stop. The Angolan authorities threatened him multiple times that they would force-feed him, and even his wife wanted him to be a “husband, father and friend”, rather than a “martyr”. After a lot of pressure, he gave in on October 27, after his case received worldwide recognition.

On December 19, almost two months later, Luaty and the rest of the activists were put on house arrest, where they have been ever since. Now, after more than a year of tribulations, the 17 activists will have to do jail time in spite of the protests from the International Community and the Amnesty International.